Kerry Returns to Mideast to Push for Cease-fire
Advertisement 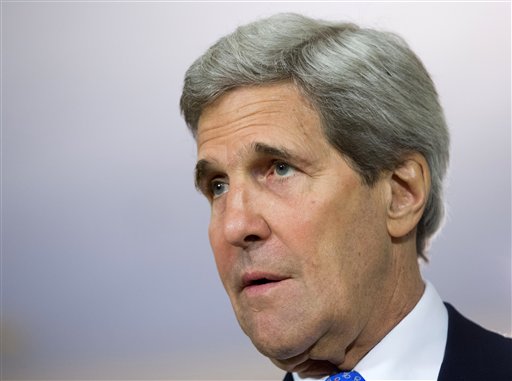 WASHINGTON (AP) — U.S. Secretary of State John Kerry is making a renewed push for a cease-fire between Israel and Hamas with another trip to the Middle East after the civilian death toll in the conflict sharply escalated over the weekend.

Kerry left Washington early Monday for Cairo, where he will join diplomatic efforts to resume a truce that had been agreed to in November 2012.

He will urge the militant Palestinian group to accept a cease-fire agreement offered by Egypt that would halt nearly two weeks of fighting. More than 500 Palestinians and 20 Israelis have been killed in that time.

The Obama administration, including Kerry, is sharpening its criticism of Hamas for its rocket attacks on Israel and other provocative acts, like tunneling under the border. It is also toning down an earlier rebuke of Israel for attacks on the Gaza Strip that have killed civilians, including children.

In a statement Sunday evening, State Department spokeswoman Jen Psaki said the U.S. and international partners were “deeply concerned about the risk of further escalation, and the loss of more innocent life.”

Two Americans, Max Steinberg of California and Nissim Carmeli of Texas, who fought for the Israel Defense Forces were killed in fighting in the Gaza Strip. The State Department confirmed the names of the two U.S. citizens Sunday night.

Cairo’s cease-fire plan is backed by the U.S. and Israel. But Hamas has rejected the Egyptian plan and is relying on governments in Qatar and Turkey for an alternative proposal. Qatar and Turkey have ties to the Muslim Brotherhood, which is also linked to Hamas but banned in Egypt.

Making the rounds of Sunday talk shows, Kerry said Hamas needs to recognize its own responsibility for the conflict.

Both President Barack Obama and Kerry said Israel has a right to defend itself against frequent rocket attacks by Hamas from the Gaza Strip. Kerry accused Hamas of attempting to sedate and kidnap Israelis through a network of tunnels that militants have used to stage cross-border raids.

He said on CNN’s “State of the Union” that Hamas must “step up and show a level of reasonableness, and they need to accept the offer of a cease-fire.”

The nearly two-week conflict appeared to be escalating as U.N. chief Ban Ki-moon was already in the region to try to revive cease-fire efforts.

Obama, in a telephone call Sunday, told Israeli Prime Minister Benjamin Netanyahu that Kerry was coming to the Mideast and condemned Hamas’ attacks, according to a White House statement.

The U.N. relief agency in Gaza estimates that 70,000 Palestinians have fled their homes in the fighting and are seeking shelter in schools and other shelters the United Nations has set up.

U.S. officials said Hamas could bring relief to the Palestinian people if it agrees to a cease-fire proposed by Egypt — a view Netanyahu is pushing as well.

Netanyahu said in an ABC interview that Israel has tried to avoid killing Palestinian civilians by making phone calls, sending text messages and dropping leaflets on their communities. But Hamas doesn’t “give a whit about the Palestinians,” Netanyahu said. “All they want is more and more civilian deaths.”

The prime minister said his top goal is to restore a sustainable peace, but he then will ask the international community to consider demilitarizing Gaza to rid Hamas of its rockets and shut down the tunnels leading into Israel.

Follow Lara Jakes on Twitter at: https://twitter.com/larajakesAP
Copyright 2014 The Associated Press. All rights reserved. This material may not be published, broadcast, rewritten or redistributed.

Unfair Distribution of Resources Fueled Abduction of Girls in Nigeria