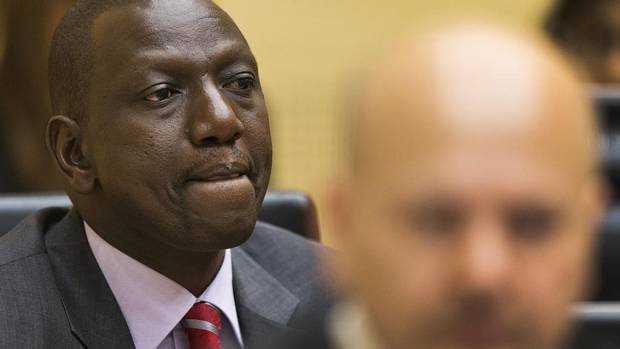 Kenya’s Deputy President William Ruto, left, awaits the start of his trial in the courtroom of the International Criminal Court (ICC) in The Hague, Netherlands, Tuesday, Sept. 10, 2013. (MICHAEL KOOREN/AP)

Kenyan deputy president William Ruto urged thousands of his followers to slaughter their neighbours, provided them with money and weapons and denounced their victims as “snakes” and “witches” who must be eliminated, prosecutors say.

The allegations emerged as Mr. Ruto walked into a courtroom in The Hague on Tuesday, becoming the first sitting government leader to stand trial at the International Criminal Court for crimes against humanity.

Kenya’s president, Uhuru Kenyatta, is due to face similar charges at the same court in November. The charges relate to a brutal wave of violence after Kenya’s 2007 election, when more than 1,000 people were killed and about 600,000 were forced from their homes. The ICC stepped into the case after Kenya refused to set up domestic tribunals to prosecute those who orchestrated the bloodshed.

Despite the charges against them, Mr. Kenyatta and Mr. Ruto were elected as Kenya’s leaders in March, capitalizing on a growing public mood that the court is discriminating against Africans. They portrayed themselves as victims of a global conspiracy.