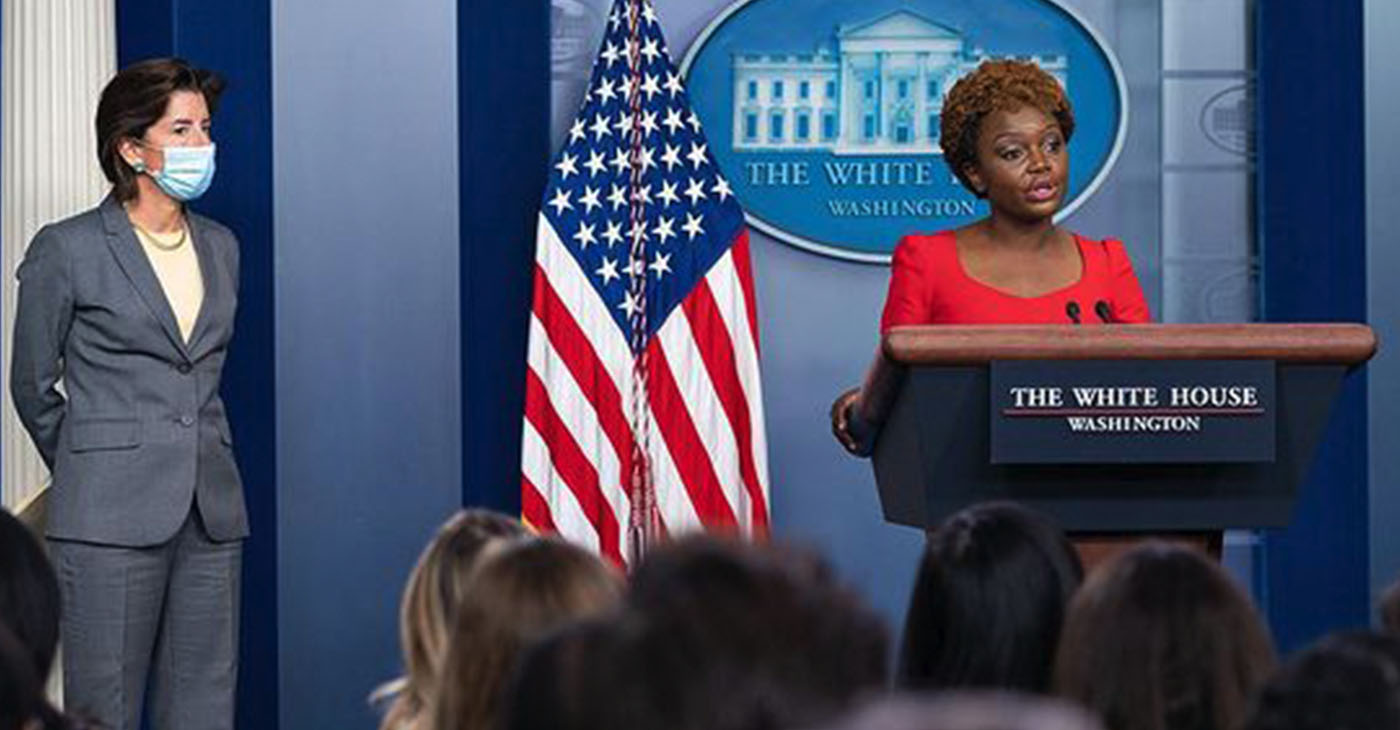 “The single-most thing that inspires me about the administration, one of the things I can say about this President and Vice President, is decency,” said White House Principal Deputy Press Secretary Karine Jean-Pierre. (Photo: Cabinet Secretaries Gina Raimondo and Pete Buttigieg visited the White House to join then Principal Deputy Press Secretary Karine Jean-Pierre for a press briefing to discuss @POTUS's Bipartisan Infrastructure Deal – a historic investment in our nation’s infrastructure.)

On the first anniversary of the Biden-Harris administration, the White House teemed with dignitaries, guests, and what appeared a larger press corps.

While that and the enormous Secret Service presence blocking off about a five-block radius on and around Pennsylvania Avenue wasn’t unusual, there remains something different – perhaps even special – about the 46th President and his staff and cabinet.

“Representation matters. We’ve seen that from the first day of this administration, the President signed an executive order to deal with racial inequity and making sure that we saw diversity and inclusion across the board in the federal government,” said White House Principal Deputy Press Secretary Karine Jean-Pierre. 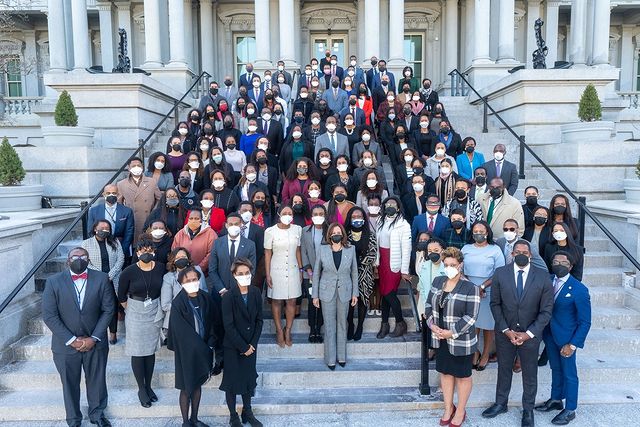 Black staff from across the White House met with @VP in celebration of Black History Month. Our Administration is proud to recognize the Black staffers who lead on and help push our work forward so our nation can be equitable, just, and prosperous for all Americans.

On January 20, the first anniversary of the Biden-Harris administration, Jean-Pierre sat down with NNPA President and CEO Dr. Benjamin F. Chavis Jr., for a wide-ranging discussion.

The discussion will be part of a 2022 Black History Month broadcast on PBS-TV stations across the nation and PBS-World’s “The Chavis Chronicles,” and will include a focus on the successes and vision of the Biden Administration.

It also highlighted what the President and Vice President are doing to resolve issues like voting rights, police brutality, diversity, equity, and inclusion, and repairing America’s reputation abroad after four years of Donald Trump’s divisive administration.

With a light-up-the-room smile and oozing with confidence, Jean-Pierre might best exude why it might just be a matter of time before this White House earns the respect of the world.

“We’re living in a polarized country right now, and the one thing that President talked about when he was running, he wanted to make sure that he was the President for all,” Jean-Pierre remarked.

Jean-Pierre struck a confident tone despite strong GOP opposition to the administration’s policies and a media that relentlessly highlights any shortcomings.

“It will take more than a year to get to the other side of that so it’s not so polarizing and so we can actually get our message through to the American people,” Jean-Pierre insisted.

At 44, Jean-Pierre has a unique window into politics and movements.

And nothing was handed to her.

Facing a hard-knock life in their native Haiti, Jean-Pierre’s parents gave birth to their daughter in Martinique and immigrated to the United States when she was a small child.

Her father took a job as a New York City cab driver, which he still does part-time today. Jean-Pierre’s mother began working as a home healthcare aide, which she maintains.

“They heard of the opportunities here, but it was a Catch-22 because you came here for opportunities, and you also come here as a Black family,” she continued.

“It was very hard for them and they — like so many families across this country — lived paycheck to paycheck.”

But unmistakably, Jean-Pierre knows how proud her parents are that their daughter has accomplished so much, even making history last year as just the second Black woman to take the podium and lead a White House press briefing.

“It was truly an honor, and one of the things we all recognize and say is to not to forget the shoulders that we stand on, and I certainly remember Judy Smith, [the first Black woman to lead a White House briefing],” Jean-Pierre stated.

“I wouldn’t be in this position, but President Biden made that decision to put me in this administration. To do the work that we are doing makes me so proud and knowing that I have so many folks out there who are proud of me.”

In many ways, her parents feel they’ve reached their dreams through her, Jean-Pierre offered.

“They came from an impoverished country but left to get a better life for their kids. For them, they are so proud of me, and they feel they have reached their dream because of my successes, but without them, I wouldn’t be where I am,” she acknowledged.

While her parents encouraged Jean-Pierre to become a doctor or lawyer, she worked in politics in New York, served in the Obama administration, and was a spokesperson for MoveOn, the advocacy and political action group.

“The Black Press of America and The Chavis Chronicles are so pleased to have conducted the timely and visionary interview with Karine Jean-Pierre as she so authentically and accurately represents the Biden-Harris Administration before the global media,” Dr. Benjamin Chavis emphasized. “Karine personifies the best of the best with her veracity, keen insights and genius.”

“Even when I was teaching, my students would ask how I got to work at the White House. I tell them to follow your passion, what you believe in, and it will all come together if you do. So, keep following and believing your heart and what excites you every morning, and what you believe is making change. It will come.”

Jean-Pierre also expressed the victories achieved by the Biden-Harris administration.

She said those include improving foreign relations, including working with Haiti and nations in Africa.

She said that the bipartisan infrastructure bill also counted as a significant win for the administration.

“It became law after the President brought the two sides of the aisle together and did something that Congress talked about and past Presidents talked about but were not able to get done,” Jean-Pierre noted.

“That bill not only fixes roads and bridges, but it makes broadband accessible and affordable for all Americans,” she said.

She said the President’s Build Back Better bill would continue to invest in America, including more investments for historically Black colleges and universities.

Another signature administration legislation, the American Rescue Plan, helped put money in the pockets of the poor and working-class, significantly reduced child poverty, and has helped lead to more than 75 million Americans getting vaccinated against Covid-19.

And, as she continues her course inside and outside the briefing room, Jean-Pierre said she couldn’t be more pleased with the state of the administration.

“The single-most thing that inspires me about the administration, one of the things I can say about this President and Vice President, is decency,” said Jean-Pierre.

“They respect people and understand what people are going through, and they truly want to deliver. They saw Black and Brown communities were always left behind, and when we talk about our economic policy, we bring everyone in, and that makes me so proud.

#2.9.2022 The Black Press of America: A conversation between journalists