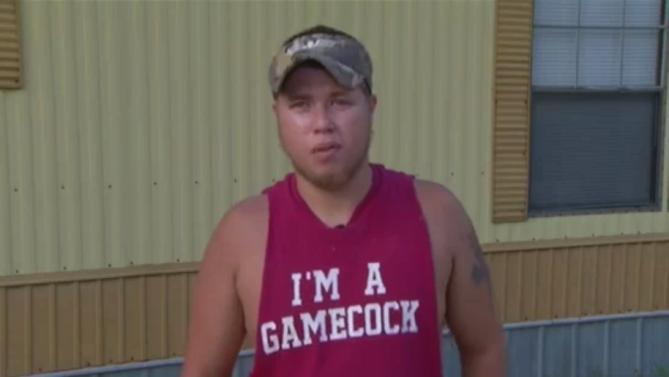 In this June 18, 2015 frame from video Joey Meek, friend of Dylann Roof who is accused of killing nine black church members during Bible study on June 17 in Charleston , S.C., speaks to The Associated Press. Meek was arrested Thursday, Sept. 17, more than a month after authorities told him he was under federal investigation for lying to them and failing to report a crime, an official close to the probe said. (APTN via AP)

Meek, 21, was charged by a federal grand jury with one count of making false statements to federal officials and one count of “misprision of a felony,” meaning he concealed knowledge about a crime. At a hearing in federal court, U.S. Magistrate Judge Shiva V. Hodges said the only plea she could accept was one of not guilty; that plea was entered on Meek’s behalf.

Meek “is alleged to have taken steps to conceal his knowledge of the crimes committed by Dylann Storm Roof,” according to a Justice Department news release, “and to have made materially false statements when Meek told a special agent of the FBI that he did not know specifics of Roof’s plan to shoot individuals on a Wednesday, during Bible study, at an [Emanuel] AME Church in Charleston.”

Meek’s mother, Karen Konzny, burst into tears Friday at the sight of her son clad in an orange jumpsuit, shackled at the hands and feet. “We love you,” she whispered as her son rocked back and forth before the hearing.