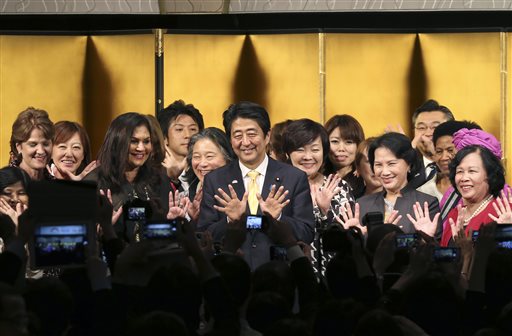 Japanese Prime Minister Shinzo Abe, center, poses for a photo with participants during a reception of WAW!, or the World Assembly for Women, in Tokyo, Friday, Aug. 28, 2015. (AP Photo/Koji Sasahara, Pool)

The law approved by a vote of 230-1 in the House of Councillors is intended to promote greater gender equality and counter labor shortages that are arising as Japan’s population ages and declines.

The decision coincided with an international conference showcasing Prime Minister Shinzo Abe’s commitment to increasing the share of women in leadership positions to 30 percent.

Japan now lags most other industrial countries in this respect, and Abe has spearheaded various empowerment initiatives, vowing to make it a society where “women shine.”

It also only requires that targets be set, not met, and does not address a lack of enforcement of existing requirements for companies to give equal pay for equal work.

Provisions for ensuring such equal treatment for contract or part-time workers have been watered down in recent labor reform legislation, says Richard Katz of the Oriental Economist.

“The Abe Administration had a chance this year to do something that would be genuinely effective in raising wages: putting in a solid equal pay for equal work provision in the law. Instead, it took the opposite tack and actively defeated the attempt,” Katz wrote in a recent research paper.

Officials say the government plans to publicly recognize companies that make progress toward their targets and give them preference in winning public contracts.

“The greatest challenge facing Japan is our declining population, brought about by our aging society and falling birthrate,” Abe told the conference of mostly Japanese and foreign women.

“We will more proactively value and support companies working to provide a sound work-life balance,” he said.

Nearly half of all women stop working to raise young children and then return to part-time or contractual work that pays much less than career track jobs.

Japan’s rigid corporate culture, with long hours and limited opportunities for women, means they are only about 11 percent of all managers and supervisors in Japan.

The government exceeded its target of increasing the number of women it hired for career track positions to 34.4 percent. It has also required publicly listed companies to report the number of women on their boards of directors. Abe said that figure has increased by about a third since he took office.

Women working in managerial positions in the government say that conditions are fair, but that working hours remain punishingly long.

Harassment of working mothers is so endemic that Japanese have coined an expression for it, “mata-hara,” or maternity harassment.

For Many, ‘Retirement’ Means Getting a Job