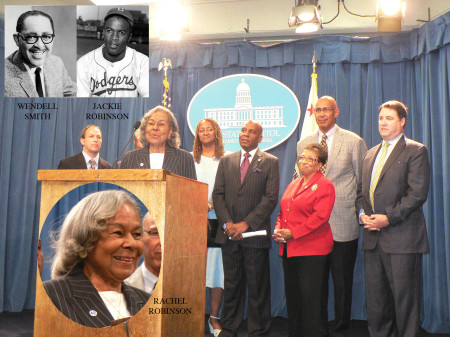 Rachel Robinson, at the podium, the wife of the late Jackie Robinson talks about her husband and Black sportswriter Wendell Smith at the California State Capitol on Sep. 9, 2013. While Jackie Robinson made history by integrating Major League Baseball in 1947, Smith, who accompanied Robinson around the country during that historical season, also faced racism as a journalist. Standing behind Mrs. Robinson, shown left to right are California Assemblymembers Brian Maienschein, Holly Mitchell, Steven Bradford, Cheryl Brown, Chris Holden, and Sen. Joel Anderson. OBSERVER photos by Antonio R. Harvey (with the exception of Jackie Robinson’s and Wendell Smith’s inset photos).

SACRAMENTO — When Jack Roosevelt “Jackie” Robinson became the first Black player to play in Major League Baseball (MLB), he and his wife, Rachel Robinson, were under continuous scrutiny and blatant bigotry, from a section of society that cared not to see change.

Robinson, who played first in the Negro Leagues, went on to smash the baseball color line, when the Brooklyn Dodgers started him at first base on April 15, 1947.
Other Blacks soon followed him into the majors.
For the most part, a member of the Black press was with the Robinsons chronicling their travails and triumphs, as the reporter himself quietly dealt with his own battles and racial issues, Mrs. Robinson said as she  spoke at the State Capitol earlier this week.
Wendell Smith, a sportswriter with the Pittsburgh Courier, traveled with Jackie Robinson. The baseball great had to stay in separated hotels from his teammates due to Jim Crow laws in the deep south. Robinson had to put up with racism on and off the field, while his writing companion Smith garnered prejudice sitting far outside of the mainstream press rooms.
“Wendell Smith was an amazing source of support  for us,” Mrs. Robinson said of their relationship with the Black reporter.
“There are aspects of that early period (of integrating Major League Baseball) that I don’t know if we could have lived through without Wendell,” she stated.
Mrs. Robinson was invited to the State Capitol by State Sen. Roderick D. Wright and the California Legislative Black Caucus (CLBC) for a day of recognition on the Senate and Assembly floors. She also joined the legislators and elected leaders from Sacramento for a special screening of the film, “42,” at the Crest Theatre.
The movie “42,” the iconic number that Jackie Robinson wore on his uniform, showcases how Robinson was forced to demonstrate his courage and restraint, not reacting to the racism shown him after the Dodgers’ Branch Rickey signed him to make his historical stand.
Indirectly, the film also put a spotlight on Smith’s role as Robinson slowly silenced the critics and gained support of the fans. The Pittsburgh Courier paid for Smith to escort the Robinsons from town to town and from city to city.
At the ballparks, Smith, who covered the Negro Baseball League, could not report or write stories in the mainstream press boxes because of his color and the fact that he was not a member of the Baseball Writers’ Association of America (BWAA).
Mrs. Robinson told The OBSERVER that Smith never worried her or her husband about his dilemmas that were just as negative as Jackie Robinson’s. Smith was later accepted as a member in the BWAA and advanced to become a sports reporter for the mainstream press, including the Chicago Sun-Times.
“He (Smith) did not burden us with what he was going through,” Mrs. Robinson told The OBSERVER.
“We really didn’t know much about how he was being treated. But he was like a big brother. He was very close to us. He was a great reporter,” she stated.
Jackie Robinson passed away in 1972 and Smith died one month later.
A year after Robinson’s passing, Mrs. Robinson founded the Jackie Robinson Foundation (JRF). The JRF is one of the nation’s premier education and leadership development programs.
The Foundation transcends financial assistance and prepares its scholarship recipients with support services, internship placements, and career guidance.
Mrs. Robinson was accompanied to the State Capitol by Della Britton Baeza, the President and CEO of the Foundation. Assemblyman Steven Bradford (D-Los Angeles), on the Assembly floor, introduced House Resolution 24 (HR-24), a bill that would rename Manchester and Firestone Boulevard in Los Angeles after Mrs. Robinson’s iconic husband.
“Hopefully, we will have an 100-percent voter participation from the House in moving that legislature forward,” Bradford said of HR-24.
Mrs. Robinson met Jackie when they both attended the University of California, Los Angeles (UCLA), in 1941.
“Isn’t she just fabulous at her age,” Assemblywoman Holly Mitchell (D-Los Angeles) said of Mrs. Robinson, who just turned 92. “She gives me hope,” said Assemblywoman Mitchell.
They married in 1946 and became the parents of three children.
Mrs. Robinson pursued a career in psychiatric nursing and was later an assistant professor at Yale School of Nursing followed by a stint as the Director of Nursing at the Connecticut Mental Health Center.
Post Views: 29
Related Topics:Jackie Robinsonjackie robinson 42jackie robinson dodgerswendell smith
Up Next

As Miami Heat Goes for No. 3, Here are Six Teams That Stand in the Way