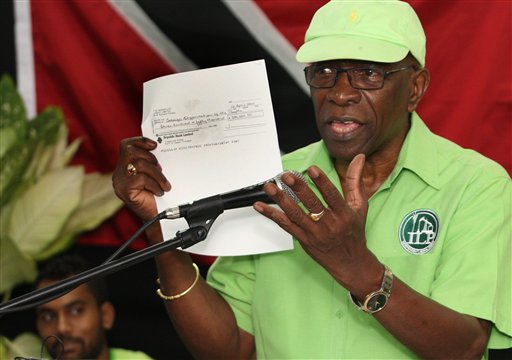 Former FIFA vice president Jack Warner hold a copy of a check while he speaks at a political rally in Marabella, Trinidad and Tobago, Wednesday, June 3, 2015. Warner made a televised address Wednesday night, saying he will prove a link between soccer’s governing body and his nation’s elections in 2010. Warner said he has documents and checks that link FIFA officials, including embattled President Sepp Blatter, to the 2010 election in Trinidad and Tobago. (AP Photo/Anthony Harris)

PORT-OF-SPAIN, Trinidad (AP) — In one moment, Jack Warner is on TV telling his countrymen he fears for his life. An hour later, he’s standing on a packed narrow street at a political rally, boasting that he fears nothing.

Contradictions are a constant for Warner, who grew up with almost nothing in Trinidad and Tobago, and became a rich and powerful vice president of FIFA, world soccer’s governing body. He rubbed elbows with world leaders on a regular basis before being forced out in an ethics scandal four years ago.

Now, his empire seems on the verge of crumbling.

Indicted last week by the U.S. on charges of racketeering, wire fraud and money-laundering, Warner scoffs at the accusations, insisting he’s done nothing wrong.

In Trinidad, they’ve heard it all before, though many residents say if Warner amassed riches without taking it from them, they’re fine with the arrangement.

“He is our Robin Hood,” said Eraj Sagewan, a taxi driver in the capital of Port-of- Spain.

That’s how many in Trinidad see the 72-year-old Warner, now a member of Parliament. If he stole from the rich and gave to the poor, then they see no harm done. He is simultaneously a villain and a hero, known for getting what he wants, but also for personally arranging whatever help — doctors, food, anything — his constituents need.

“If he didn’t live so long, he would have died a hero,” said Sunity Maharaj, a journalist who has long followed Warner. “He would have been the story of the little boy who grew up to be FIFA vice president.”

Warner doesn’t hide his hubris and says the world’s perception of him is nowhere near the reality.

“Everybody knows Jack Warner is bad news. Jack Warner has Ebola,” he says to an ovation — bolstered by piped-in cheers from an elaborate sound system.

The rally starts late, with about 50 people. The neighborhood’s barking dogs are louder than the crowd. Locals set up tables to sell crackers and snow cones.

After an hour or so, Warner arrives, wearing the lime green colors of his Independent Liberal Party. The street is jammed, with the crowd having grown fivefold and police help with traffic and crowd control. The dogs can’t be heard anymore.

“I do this for you!” Warner proclaims.

Said Ria Bisnath, an observer: “If this was America, you would call Jack Warner a rock star.”

His future is uncertain, something Warner acknowledges. The charges that revolve around allegations of bribery are the most serious he has faced, although he insists they are trumped up.

Warner maintains the Americans are still upset that FIFA — which he left in disgrace in 2011 after being implicated in an earlier bribery scandal — awarded the 2022 World Cup to Qatar and not the U.S.

“Nobody, no contractor, alive or dead, can say he gave me a kickback,” Warner said. “Everything I have now, I had before politics. But there are some guys in politics now who had nothing before. How come nobody is concerned with that? … But they’re concerned about FIFA’s money because they feel that that will make Jack Warner fall.”

U.S. prosecutors allege South Africa paid $10 million in 2008 to Warner and two other FIFA executive committee members as payback for supporting that nation’s successful bid to host the 2010 World Cup over Morocco. South African officials say the $10 million was paid, though it does not characterize it as a bribe, calling it an “above-board payment” to help soccer development in the Caribbean region.

Officials also allege he and others, including former FIFA executive committee member Chuck Blazer of the U.S., got rich off accounts they controlled through CONCACAF, which oversees soccer in North and Central America and the Caribbean. Blazer has cooperated with authorities. Some of that money is believed to have been steered toward a building in Trinidad called the Center of Excellence. Warner has denied owning the center — where residents go to play soccer, swim, even have wedding receptions — but records show otherwise.

Warner said Wednesday night he has compiled reams of documents to expose wrongdoing, adding that when he heard FIFA President Sepp Blatter was planning to resign, he wrote him and urged his immediate departure.

“Blatter knows why he fell. And if anyone else knows, I do,” Warner said.

Warner’s supporters say the charges are meant to embarrass him ahead of elections this year, with Liberal Independent Party chairman Rekha Ramjit calling them “political manipulation to the highest extent.”

Simply saying the name “Jack” to hotel workers, waiters, lawmakers and others elicits a reaction, often accompanied by an eye roll. Some, including top soccer officials, refused to talk about him.

“I take no pleasure in Mr. Warner’s sufferings and his family’s pain,” said opposition party leader Keith Rowley. “I trust that he will be the subject of free and fair judicial processes in Trinidad and Tobago and outside. Let the law take its course.”

Warner often speaks out against the press — he made specific reference to the media at his political rally Wednesday night and later said U.S. reporters were unfair to him — yet he publishes a weekly newspaper and has thrown lavish parties for even those journalists who have criticized him. He writes commentaries, but doesn’t like answering questions. He was mocked on the Internet earlier in the week after he tried to defend himself by quoting an article from the satirical outlet The Onion.

Spending a night in jail after his arrest last week was a good thing, he said, because he got to tell other Trinidadian leaders they should clean up the prisons.

Maybe there’s no better example of the many sides of Warner than what happened at a World Cup qualifying match in Port-of-Spain in 1989. The U.S. beat Trinidad and Tobago 1-0 that day inside a packed stadium, winning on a goal from Paul Caligiuri — still regarded as one of the most important goals in American soccer history.

Two perceptions of Warner have persevered: Is he the ambassador who humbly gave Caligiuri his straw hat as a token of congratulations in the U.S. locker room after the game? Or is he the promoter who arranged for the overselling of thousands of tickets, leaving some without a view or stuck outside the stadium?

“Sometimes I deliberately break my rear-view mirror, because it is not always pleasant to look back,” said Raymond Tim Kee, the mayor of Port-of-Spain who also leads the soccer association that Warner once controlled financially. “Since I assumed office two years ago, one of the first things I pursued was rebranding because what I realized was the football federation at the time had lost credibility and there were a lot of questions and fears because of all that was going on that time.”

Tim Kee formed an independent reform commission and is keeping a keen eye on the latest Warner scandal.

“I have the utmost confidence in the U.S. ability to dig deep. … So I have trust in the authorities and their ability to uncover things,” he said.

To this day, what is best remembered about soccer in Trinidad is the run to the 2006 World Cup, the first and only time the tiny nation has reached the sport’s biggest stage. What should have been a gigantic celebration is known here for Warner feuding with players over compensation.

That’s where Warner’s gift of deflection comes into play. When asked what happened at the time, Warner responded with a story about how he mortgaged his home to fund Trinidad’s attempt to qualify for the 1994 World Cup.

“Gandhi once said that all through history, there have been tyrants,” Warner said. “But in the end, they fall.”