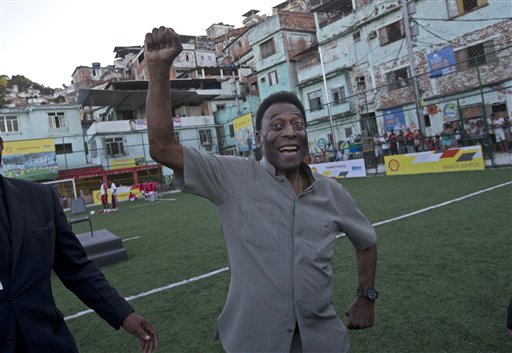 In this Sept. 10, 2014 file photo, Brazilian soccer great Pele pumps his fist in the air while he poses for photos during the inauguration of a soccer pitch to be powered by players’ footsteps, at the Morro da Mineira favela, in Rio de Janeiro, Brazil. (AP Photo/Silvia Izquierdo, File)

NEW YORK (UPI) — IFC Films says it is acquiring the North American rights to the biopic Pelé: Birth of a Legend and plans to release it in 2016.

Written and directed by Michael and Jeffrey Zimbalist, the film was produced by Imagine Entertainment and Seine Pictures. The titular, Brazilian soccer great served as an executive producer on the picture, which chronicles his early career.

Newcomers Leonardo Carvalho and Kevin de Paula were cast to play the rising star at ages nine and 17 respectively after an extensive, international search by the film’s producers and casting directors.