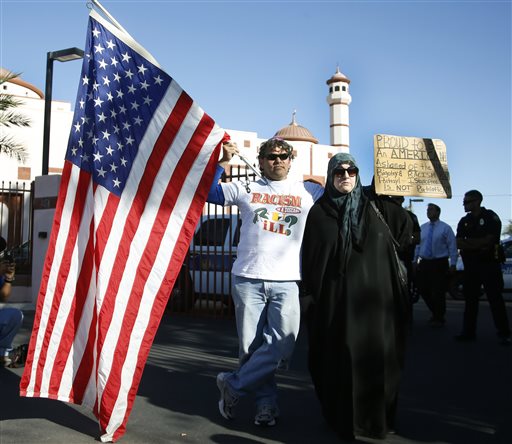 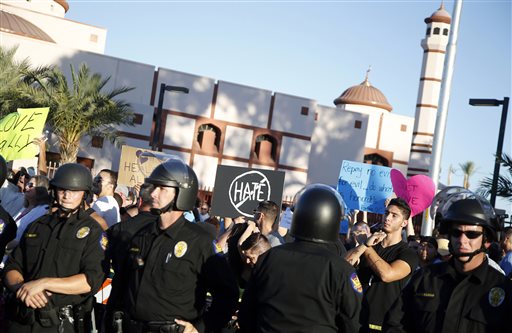 Protesters gather outside the Islamic Community Center of Phoenix, Friday, May 29, 2015. About 500 protesters gathered outside the Phoenix mosque on Friday as police kept two groups sparring about Islam far apart from each other. (AP Photo/Rick Scuteri)

Violence never broke out, but the clash was often heated, as demonstrators yelled and taunted one another across a line of police separating the two sides.

The event’s organizer drew a worldwide spotlight in recent days, as awareness grew on social media. Though actual attendance was far fewer, more than 1,400 people had said on a public Facebook invite that they would attend.

With the nation watching, Jon Ritzheimer, the organizer of the protest, said he wanted to see more demonstrations like his, calling it a patriotic sign of resistance against what he deemed the tyranny of Islam in America.

“I would love to see more of these events pop up in other states,” Ritzheimer said. “I want fellow patriots standing right here next to me. This isn’t about me. Everybody’s been thinking it, I’m just saying it.”

THE RELIGION CORNER: Open the Floodgates of Heaven

Lesson 25: The Book of Revelation