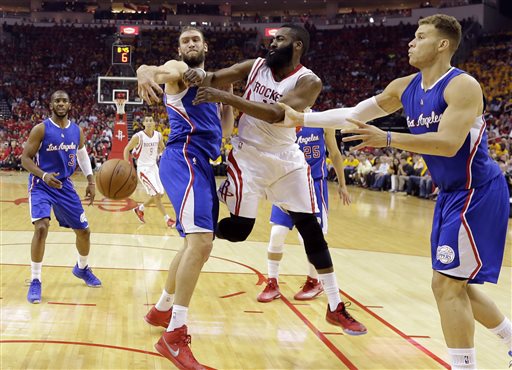 HOUSTON (AP) — James Harden received an IV Tuesday afternoon, his answers to postgame questions were peppered with coughs and he sniffled repeatedly between queries.

Harden clearly wasn’t feeling well. But faced with elimination in the Western Conference semifinals, Houston’s bearded superstar shook off his illness and had a triple-double in perhaps his best playoff performance to keep the Rockets alive.

Harden had 26 points, 11 rebounds and 10 assists, Dwight Howard added 20 points and 15 rebounds, and the Rockets bounced back from two lopsided losses with a 124-103 victory over the Los Angeles Clippers.

“I’m all right,” Harden said when asked about his health. “We won, so that’s all that matters.”

The Rockets hadn’t lost three straight all season, and with their season on the line they ended their skid to send it back to Los Angeles for Game 6 on Thursday night.

Houston used a 36-point second quarter to take a commanding lead and withstood a third-quarter surge by Los Angeles to lead by 14 entering the fourth.

Blake Griffin had 30 points and 16 rebounds, and Chris Paul added 22 points and 10 assists for the Clippers.

“They were more focused,” Clippers coach Doc Rivers said. “They played like they were the desperate team and we didn’t play very desperate.”

Harden made a 3-pointer with about two minutes to play to make it 121-100 and coach Kevin McHale cleared the bench. Harden’s triple-double was Houston’s first in the postseason since Steve Francis in 2004.

Howard was impressed with Harden’s ability to play so well when he was under the weather.

“This is win or go home and I’m pretty sure he wants this as bad as we all do and he showed that tonight,” Howard said.

Trevor Ariza added 22 points for Houston and Corey Brewer had 15.

McHale toyed with the starting lineup after losses by 25 and 33 points, inserting Josh Smith in place of Terrence Jones. Smith finished with nine points and seven rebounds, while Jones provided a spark off the bench with 12 points.

“I just wanted to shake things up a bit and … see if we could get more ball movement,” McHale said.

Houston was up by 14 with nine minutes left when Smith scored five quick points, capped by a 3-pointer, to make it 99-80. Smith, who joined the Rockets after being released by the Pistons, held out three fingers on each hand before beating his chest as fans rose to their feet.

Howard managed just seven points and six rebounds in Game 4 after getting into early foul trouble. He had no such problems on Tuesday night and had eclipsed his numbers in that game in the first quarter. His work helped Houston outscore Los Angeles 64-46 in the paint.

The Clippers had cut the lead from 22 points to 13 late in the third quarter when Houston started intentionally fouling DeAndre Jordan. They did it twice and he missed three of four before the Clippers returned the favor on Howard.

The Hack-A-Shaq stretch wasn’t anywhere close to what it was in the last game when the Rockets did it time after time, giving Jordan 34 free throw attempts. He made just 14 of them on Sunday. Both teams also did it some in the fourth quarter on Tuesday, with Houston fouling Jordan and the Clippers doing it to Howard, Smith and Brewer.

Four quick points by Howard gave the Rockets a 22-point lead with about seven minutes left in the third quarter. Jordan got his fourth foul soon after that, but coach Doc Rivers kept him on the floor. The Clippers got going after that, using a 13-4 spurt to cut it to 83-70 with three minutes remaining in the third. Griffin took over for Los Angeles in that span, scoring nine points.

Ariza led Houston early in the third quarter, scoring eight points in a 12-7 run that pushed the lead to 75-55.

Los Angeles got within 2 with 3 1/2 minutes left in the first half when Hawes hit a 3-pointer as the shot clock expired. But Houston scored the next nine points to extend the lead to 57-46. Griffin made a layup before the Rockets scored the last six points of the second quarter to make it 63-48 at halftime.

The Rockets led 27-22 at the end of the first quarter after getting nine points and eight rebounds from Howard.

Griffin on the chance to close out the series Thursday: “They outplayed us and played like they wanted it … we need to learn from this game and improve upon it. We have a chance to take care of business and play how we need to play.”

Clippers: Spencer Hawes came off the bench to score 11. … Jordan finished with 13 points and 11 rebounds. … Rivers said he thinks Austin Rivers has a hip pointer after falling to the court hard late in the game. He said he’ll know more about the injury on Wednesday.