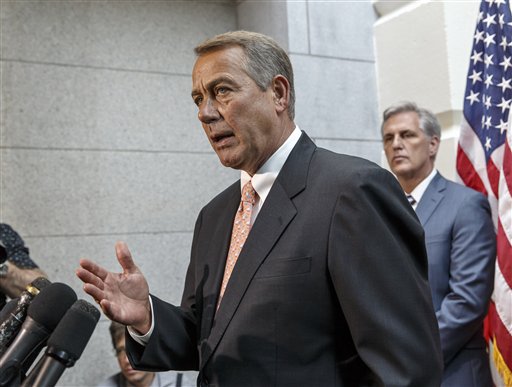 WASHINGTON (AP) — At an impasse on immigration, House Republicans and Senate Democrats advanced competing proposals Wednesday for dealing with tens of thousands of young migrants showing up at the southern border. Each side quickly ruled the other’s approach unacceptable, leaving any solution unclear with Congress’ annual August recess looming.

Unless Democrats capitulate, “We’re going to be at an impasse and we will have earned even greater disdain from the American people than we already have,” Sen. John McCain, R-Ariz., said.

But Republicans were having difficulty agreeing even among themselves.

At a morning meeting of House Republicans, Speaker John Boehner urged action to address the border crisis, reminding GOP lawmakers that the Border Patrol and other agencies would be running out of money in coming months because of the heavy influx of unaccompanied minors and families at the border.

The Obama administration is assessing the need for sending National Guard troops to the border. A Pentagon and Homeland Security team is at the Rio Grande Valley Border Patrol Sector.

Some House Republicans have called for a surge of troops to help enforce border security, and Texas Gov. Rick Perry said this week he will send 1,000 National Guard troops to the border.

A working group appointed by Boehner rolled out proposals including sending in the National Guard and changing a 2008 trafficking victims law to allow Central American children to be turned around quickly at the border and sent back home. Lawmakers announced plans to chop President Barack Obama’s $3.7 billion emergency spending request for the border crisis down to $1.5 billion.

But as they left the meeting in the basement of the Capitol, some of the more conservative members of the GOP caucus made clear they were unconvinced.

“If Republicans move forward on this, we’re now jumping right in the middle of President Obama’s nightmare and making it ours,” said Rep. John Fleming, R-La. Fleming said he worried that any House-passed bill “will be turned on its head” by the Senate “and actually make the problem even worse.”

Fleming said Boehner told Republicans he was undecided about bringing the plan to the floor because he didn’t know whether there were enough votes to pass it.

In his comments to reporters after the meeting, Boehner was noncommittal.

“This discussion with our members is going to continue, but we’ve not made any decisions,” he said. “I’d like to act. We’ve got a humanitarian crisis on the border that has to be dealt with.”

The path forward was not much clearer in the Senate, where Appropriations Committee Chairwoman Barbara Mikulski, D-Md., introduced legislation paring Obama’s spending request back to $2.7 billion for more immigration judges, detention facilities and other resources.

“We cannot turn our backs on these children,” Mikulski said on the Senate floor.

But Mikulski said she was omitting from her legislation any changes to the 2008 trafficking victims law, which Republicans say has contributed to the crisis by allowing Central American youths to stay in this country indefinitely while awaiting far-off court dates.

“We don’t want a backdoor version of bad immigration reform,” Mikulski said. “This bill is only a money bill. It does not include immigration legislation.”

Republicans continued to demand changes to the 2008 law as the price for approving any money for the crisis, and Republican senators made clear they would not lend their votes without those provisions. “A fundamental of any agreement is the repeal of the 2008 law,” McCain said.

Without GOP support it wasn’t clear the Senate would be able to advance Mikulski’s bill, and it wasn’t evident whether a compromise could emerge.

White House officials and some Democrats were initially open to changing the 2008 law, but there has been a backlash from immigration advocates who say kids would be sent back to their deaths at the hands of vicious gangs in parts of Central America. Now most Democrats say they are strongly opposed.

“I’m willing to compromise on things, but it depends on what,” Sen. Tom Harkin, D-Iowa, said. “If they really want to take these kids and ship them back in five days without giving them the right to at least have a decent right to claim asylum, no, I’m not going to change on that.”

Boehner’s working group, chaired by Rep. Kay Granger, R-Texas, would allow Central American youths to be treated the same as those from Mexico, who can be turned around quickly at the border unless they can convince Border Patrol agents that they merit more extensive screening. Other proposals include speeding up court hearings and boosting border security.

“Without trying to fix the problem I don’t know how we actually are in a position to give the president any more money,” Boehner said. “What the president’s asking for is a blank check.”

Democrats and immigration advocates criticized Granger’s proposals as overly harsh, but conservatives on and off Capitol Hill said they didn’t go far enough.

Later in the day Boehner sent a letter to Obama asking him to declare his support for changing the 2008 law, pointing to mixed signals from the White House on the issue.

More than 57,000 minors have arrived since October, mostly from El Salvador, Honduras and Guatemala, and tens of thousands of families have arrived, too. Polls suggest the public is paying attention and demanding a solution, but lawmakers leave Washington at the end of next week for a five-week recess.

CNN/ORC Poll: Majority Say No to Impeachment and Lawsuit

This Time, Obama Fundraising is a Bit of ‘Scandal’