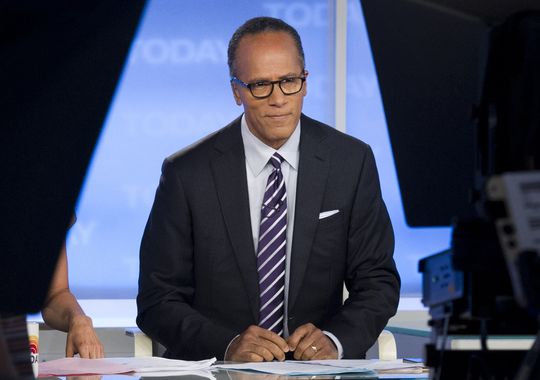 This Sept. 16, 2012 photo released by NBC shows Lester Holt on the set of “Today” in New York. (Charles Sykes/AP Photo)

NEW YORK (AP) — Two months into the transition from Brian Williams to Lester Holt as anchor of NBC’s top-rated “Nightly News” broadcast, and executives at the network can breathe easier.

NBC has beaten David Muir and ABC’s “World News Tonight” in all eight of the weeks since Holt was appointed Williams’ successor, the Nielsen company said. Last week NBC averaged 8 million viewers to ABC’s 7.7 million, and 6.4 million for the “CBS Evening News.”

NBC and ABC ran neck-and-neck during the period when Holt was the substitute for Williams, and Muir’s newscast even won several weeks. Williams was suspended by NBC for lying about his role covering the Iraq War, and eventually dismissed as “Nightly News” anchor. He is expected to re-emerge next month as a breaking news anchor on MSNBC.

Andrew Tyndall, a news consultant who monitors the content of the evening newscasts, credits NBC for a strong advertising push for Holt after five months where the newscast was essentially in limbo.

During the summer of Trump, all three evening newscasts are seeing bumps in viewership. During the past eight weeks, “Nightly News” is up 2 percent in viewers over the same period in 2014, “World News Tonight” is up 5 percent and the “CBS Evening News” is up 7 percent, Nielsen said.

The accountants at NBC News are particularly pleased with Holt’s performance among viewers aged 25 to 54, the ratings demographic used in advertising sales for news broadcasts. ABC actually led in that demo last summer, but this summer “Nightly News” is up 7 percent among that group and “World News Tonight” is even. Holt has beaten Muir seven of the past eight weeks, Nielsen said.

For entertainment programs in prime time last week, CBS led with an average of 5.3 million viewers. NBC had 4.7 million viewers, ABC had 3.3 million, Fox had 2.3 million, Univision had 2 million, Telemundo had 1.4 million and the CW and ION Television tied with 1.1 million.

Fox News Channel was the top-rated cable network last week, averaging 1.83 million viewers, as the network continued to be in the news following the first GOP presidential debate. Megyn Kelly’s prime-time show on Monday had just under 3 million viewers, her first broadcast after being criticized by Donald Trump for her questioning in the debate. That was well above her average of 2.1 million for the second quarter of the year.

ABC is owned by The Walt Disney Co. CBS is owned by CBS Corp. CW is a joint venture of Warner Bros. Entertainment and CBS Corp. Fox is owned by 21st Century Fox. NBC and Telemundo are owned by Comcast Corp. ION Television is owned by ION Media Networks.