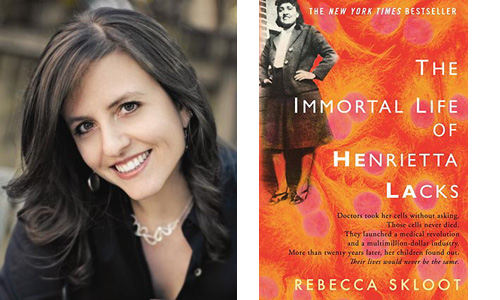 Rebecca Skloot and her novel “The Immortal Life of Henrietta Lacks”

(The Guardian) – Writer Rebecca Skloot has hit back at a Tennessee parent who is trying to have her acclaimed biography of Henrietta Lacks removed from local schools, saying the complainant is confusing “gynaecology with pornography”.

Knoxville news station WBIR reported that Jackie Sims, the mother of a 15-year-old boy at Knox County Schools’ L&N Stem Academy, had objected to Skloot’s The Immortal Life of Henrietta Lacks when he brought it home as part of his summer reading. Her son has now been assigned a different text, but Sims is attempting to get Skloot’s biography of the African-American whose cancer cells – taken from her without her knowledge and which subsequently changed modern medicine – pulled from all Knox County schools.

“I consider the book pornographic,” Sims told WBIR, citing a passage in which Skloot imagines Lacks discovering a lump in her cervix: “With the door closed to her children, husband, and cousins, Henrietta slid a finger inside herself and rubbed it across her cervix until she found what she somehow knew she’d find: a hard lump, deep inside, as though someone had lodged a marble just to the left of the opening to her womb”. Sims also objected to a passage about Lacks’ husband’s infidelity.

“It could be told in a different way,” Sims said. “There’s so many ways to say things without being that graphic in nature, and that’s the problem I have with this book … I was shocked that there was so much graphic information in the book.”

Back to School Stress Problematic