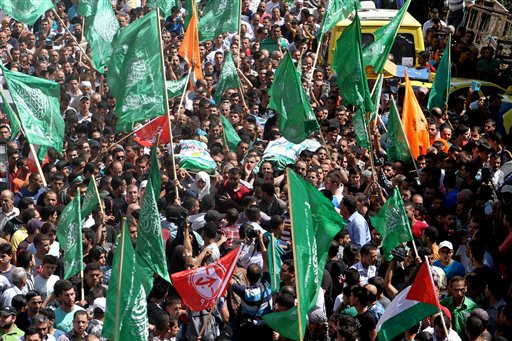 This combination of images released by the Israel Defense Forces shows Israeli teens Eyal Yifrah, 19, left, Gilad Shaar, 16, center, and 16-year-old with dual Israeli-American citizenship, Naftali Fraenkel. Israeli special forces stormed a West Bank hideout early on Tuesday, Sept. 23, 2014, and killed two Palestinians suspected in the June abduction and slaying of the three teenagers, a gruesome attack that had triggered a chain of events that led to the war in Gaza this summer. (AP Photo/Israel Defense Forces, File)

JERUSALEM (AP) — Israeli special forces stormed a West Bank hideout early on Tuesday and killed two Palestinians suspected in the June abduction and slaying of three Israeli teenagers, a gruesome attack that had triggered a chain of events that led to the war in Gaza this summer.

“This episode sends a clear and unambiguous message that Israel will do whatever it needs to to deal with threats and challenges wherever they may occur,” he said.

Eyal Yifrah, 19, Gilad Shaar, 16, and Naftali Fraenkel, a 16-year-old with dual Israeli-American citizenship, were abducted on June 12 while hitchhiking home in the West Bank and killed soon afterward.

The teens’ abduction and slaying prompted a large Israeli crackdown on the Islamic militant Hamas group and set off a chain of events that led to a 50-day war between Israel and Hamas in the Gaza Strip.

In an operation codenamed “Brother’s Keeper,” Israel dispatched thousands of troops across the West Bank in search of the youths, closed roads in the Hebron area and arrested hundreds of Hamas operatives throughout the territory.

The search ended July 1, when the bodies were found under a pile of rocks in a field north of the West Bank city of Hebron. Officials later said it was believed the three had been killed shortly after the abduction.

Lerner told reporters that there was a recent breakthrough in the search that led the Yamam, a special police counter- terrorism unit, to the hideout in an area of Hebron about a week ago.

Early on Tuesday, the Israeli special forces entered the ground floor of the two-story building and killed two Hamas operatives after coming under fire, Lerner said.

Lerner noted the two men had been identified as the suspects early in the search, their Hamas connections were well known, and Hamas has repeatedly tried to abduct Israeli civilians and soldiers. Another three members of one the Qawasmeh family were arrested, he said.

“We were determined in bringing the ruthless murderers of Gilad, Eyal and Naftali to justice,” Lerner said. “Today’s successful mission brings the long-term search to an end, and the perpetrators of the crime no longer pose a threat to Israeli civilians,” he said.

Qawasmeh’s mother Hanan described her son as “a hero” and said it was far better that he had been killed in battle rather than falling into the hands of Israeli forces.

“Thank God that he and the other man were martyred,” she said.

In Qatar, Hussam Badran, a spokesman for top Hamas leader Khaled Mashaal, praised the two militants on his Twitter account. “The martyrdom of Marwan Qawasmeh and Amer Abu Aisheh came after a long life full of jihad sacrifice and giving. This is the path of resistance, which we all are moving in,” he said.

Hamas denied involvement for weeks after the teens were abducted. However, during the Israel-Hamas war, an exiled Hamas leader responsible for West Bank operations acknowledged his group had been responsible for the abduction and killing of the teenagers.

In the days leading up to the start of the Gaza war in early July, a Palestinian youth was also abducted and killed in east Jerusalem by Israeli extremists in an apparent revenge attack over the teens’ slaying.

Obama Gets Boost for Coalition-Building Efforts