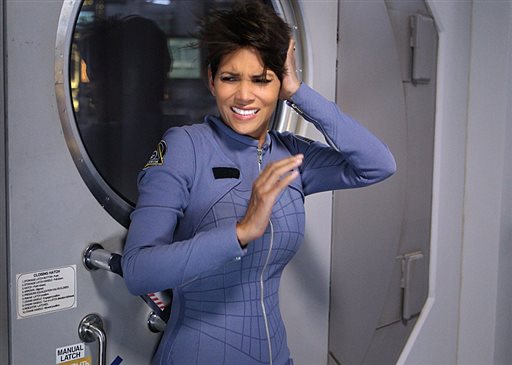 This file image released by CBS shows Halle Berry in a scene from the series “Extant.” The limited run series, in which Berry plays an astronaut who mysteriously returns from a solo space mission pregnant, had 9.6 million viewers for its first episode on CBS last week, the Nielsen company said. That was enough to make it the most-watched prime-time show during the week. (AP Photo/CBS, Sonja Flemming, File)

NEW YORK (AP) — Halle Berry made her small screen debut at a spot befitting an Academy Award winner — first place in the television ratings — but it’s too early to call her summer drama “Extant” a hit.

The limited run series, in which Berry plays an astronaut who mysteriously returns from a solo space mission pregnant, had 9.6 million viewers for its first episode on CBS last week, the Nielsen Co. said.

That was enough to make it the most-watched prime-time show during the week. By comparison, the second-season debut of “Under the Dome” a week earlier had 9.4 million viewers, a number considered disappointing given its hit status a year earlier.

With time-shifted viewing within three days of the premiere added in — people who watched a recording afterward — “Under the Dome” had 13.2 million viewers. The extra days boosted the total viewership for “Extant” to 11.9 million.

NBC’s “Welcome to Sweden,” a comedy starring Amy Poehler’s younger brother Greg, debuted Thursday with 3.5 million viewers. That made it the No. 58 show for the week.

TNT was the week’s most popular cable network, averaging 2.03 million viewers in prime time. The Disney Channel had 2.01 million, USA had 1.9 million, Fox News Channel had 1.83 million and History had 1.57 million.

NBC’s “Nightly News” topped the evening newscasts with an average of 7.8 million viewers. ABC’s “World News” was second with 7.2 million and the “CBS Evening News” had 6.1 million viewers.

ABC is owned by The Walt Disney Co. CBS is owned by CBS Corp. CW is a joint venture of Warner Bros. Entertainment and CBS Corp. Fox is owned by 21st Century Fox. NBC and Telemundo are owned by Comcast Corp. ION Television is owned by ION Media Networks.