Half of Blacks Say Police Have Treated Them Unfairly
Advertisement 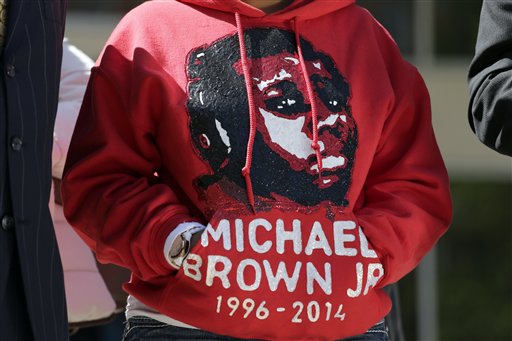 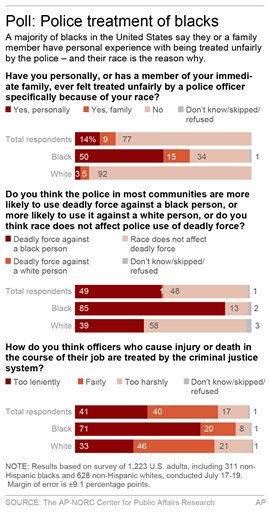 WASHINGTON (AP) — A majority of blacks in the United States — more than 3 out of 5 — say they or a family member have personal experience with being treated unfairly by the police, and their race is the reason.

This information, from a survey conducted by the Associated Press-NORC Center for Public Affairs Research, comes as the Michael Brown shooting in Ferguson, Missouri, approaches its first anniversary and the nation continues to grapple with police-related deaths of black Americans.

White Americans who live in more diverse communities — where census data show at least 25 percent of the population is non-white — were more likely than other whites to say police in their communities mistreat minorities, 58 percent to 42 percent. And they’re more likely to see the police as too quick to use deadly force, 42 percent to 29 percent.

Larry Washington, 30, of Merrillville, Indiana, described his encounter with a white police officer when he was arrested for theft in Burbank, Illinois, as a teenager. “When I got to the police station, the officer who arrested me told me that I looked like I wanted to do something about it,” Washington said, adding, “And he kept calling me ‘nigger.'”

—Sixty-two percent of whites said a major reason why police violence happens is that civilians confront the police, rather than cooperate, when they are stopped. Three out of 4 blacks, or 75 percent, said it is because the consequences of police misconduct are minimal, and few officers are prosecuted for excessive use of force. More than 7 in 10 blacks identified problems with race relations, along with poor police-community relations, as major reasons for police violence.

David A. Clarke Jr, sheriff in Milwaukee County, Wisconsin, said African-Americans have more encounters with police than whites because of crime rates in urban areas. “If you have more interaction with the police because of the crime and the disorder in our urban centers — the American ghetto I like to say it — it’s going to skew the numbers,” Clarke said.

David Thomas, 80, of Vienna, Georgia, said he was treated roughly by police as a young man in Savannah, Georgia, but relations between black communities and law enforcement have improved since then.

“Everything is not right, but it’s better,” Thomas said. “We have bad cops and we have good cops. I don’t know where we’re going to from here, but we need police.”

The AP-NORC Poll of 1,223 adults, including 311 black adults, was conducted online and by phone July 17-July 19, using a sample drawn from NORC’s probability-based AmeriSpeak panel, which is designed to be representative of the U.S. population. The margin of sampling error for all respondents is plus or minus 4.2 percentage points. For results among black respondents, the margin of error is plus or minus 9.1 percentage points.

Respondents were first selected randomly using address-based sampling methods, and later interviewed online. People selected for Amerispeak who didn’t otherwise have access to the Internet were interviewed over the phone.

Jesse J. Holland covers race, ethnicity and demographics for The Associated Press. Contact him at jholland@ap.org or on Twitter at http://www.twitter.com/jessejholland