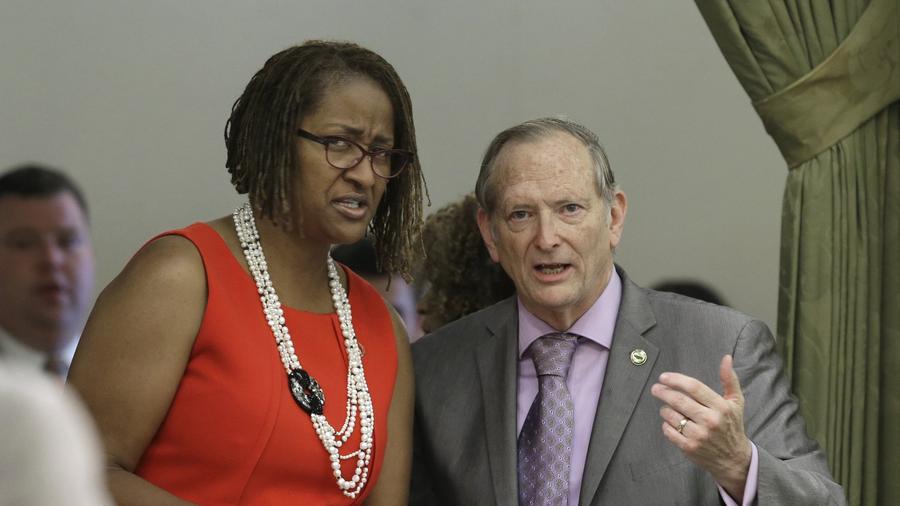 Sen. Holly Mitchell (D-Los Angeles) and Assemblyman Bill Quirk (D-Hayward) discuss her measure that would end the use of grand jury proceedings to investigate police shootings after it failed to get enough votes for passage on the first vote in the Assembly, on July 16 in Sacramento. The bill was finally approved on a second vote, 41-33 and was signed by Gov. Jerry Brown on Tuesday. (Rich Pedroncelli/AP Photo)

(Los Angeles Times) – Gov. Jerry Brown signed into law Tuesday a measure that prohibits secret grand juries to weigh in on cases involving excessive or deadly force by law enforcement, and another affirming the public’s right to take audio or video recordings of police officers.

Both measures were part of a spate of proposals introduced by lawmakers earlier this year on police accountability; some of the more controversial bills dealing with body-worn cameras or reporting on use-of-force incidents have stalled in the Legislature.

Mitchell said her bill, SB 227, would help make judicial proceedings more transparent and accountable. Los Angeles and Santa Clara counties already have opted not to use grand juries when an officer’s actions may have caused someone’s death.