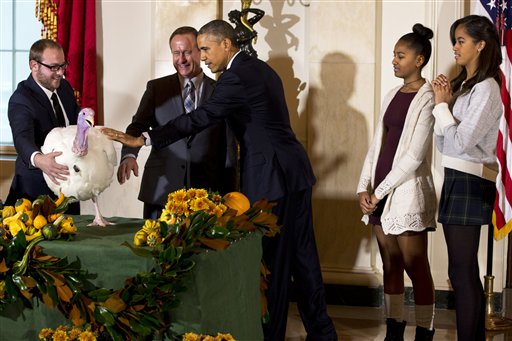 President Barack Obama, with daughters Sasha, second from right, and Malia, right, reaches out to touch “Cheese” after pardoning the turkey as part of the annual Thanksgiving tradition, Wednesday, Nov. 26, 2014, at the White House in Washington. AP Photo/Jacquelyn Martin)

WASHINGTON (AP) — An aide to a Republican congressman resigned Monday after her Facebook post criticizing President Barack Obama’s daughters touched off a backlash.

Elizabeth Lauten, communications director to Rep. Stephen Fincher of Tennessee, said 16-year-old Malia Obama and her sister Sasha, 13, should have shown more “class” at a turkey-pardoning ceremony last week at the White House.

Lauten wrote that the girls should “respect the part you play,” and added: “Then again your mother and father don’t respect their positions very much, or the nation for that matter, so I’m guessing you’re coming up a little short in the ‘good role model’ department.”

Lauten also urged the Obama girls to “dress like you deserve respect, not a spot at a bar.”

Lauten later apologized for the comments and deleted the original post, which drew harsh criticism across social media.

Jessica Carter, chief of staff for Fincher, said Monday that Lauten resigned. Carter had no additional comment on a personnel matter.

After the post became the topic of conversation on a variety websites, Lauten issued an apology, saying “many hours of prayer,” conversations with her family and a re-reading of her words made her reconsider the post.

“When I first posted on Facebook I reacted to an article and I quickly judged the two young ladies in a way that I would never have wanted to be judged myself as a teenager,” Lauten told The Commercial Appeal of Memphis in an email. “Please know, those judgmental feelings truly have no place in my heart. Furthermore, I’d like to apologize to all of those who I have hurt and offended with my words.

Herron called the comment an “unprecedented low in Washington mudslinging” and “absolutely toxic for our civic life and political culture.”

Sean Spicer, communications director for the Republican National Committee, tweeted Monday that “children, especially the first daughters, are off limits.”

But while Lauten’s comments were “inappropriate and insensitive, the mainstream media’s coverage of this story is appalling,” Spicer said, adding that in more than 20 years in politics, he has “never seen one of the countless inappropriate comments by Democrats ever covered to a fraction of this” remark by a previously unknown staffer.

Fincher represents most of rural West Tennessee and parts of East Memphis.

Follow Matthew Daly on Twitter: https://twitter.com/MatthewDalyWDC.
Copyright 2014 The Associated Press. All rights reserved. This material may not be published, broadcast, rewritten or redistributed.