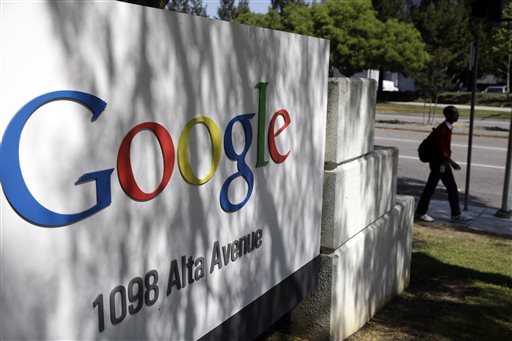 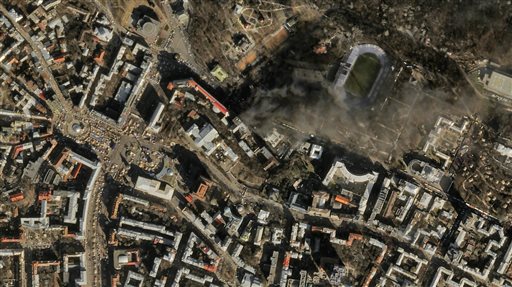 In this file satellite image provided by Skybox Imaging and taken by SkySat-1 on Tuesday, Feb. 18, 2014 at 11:10 a.m. local time, smoke rises from the site of anti-government protests, upper center, in Kiev, Ukraine. Google is buying Skybox Imaging in a deal that could serve as a launching pad for the Internet company to send its own fleet of satellites to take aerial pictures and provide online access to remote areas of the world. (AP Photo/Skybox Imaging, File)

SAN FRANCISCO (AP) — Google is buying Skybox Imaging in a deal that could serve as a launching pad for the Internet company to send its own fleet of satellites to take aerial pictures and provide online access to remote areas of the world.

The $500 million acquisition announced Tuesday initially will provide Google with the means to improve the quality and immediacy of the satellite imagery used in its digital maps.

Google Inc. plans to use Skybox’s satellite already in orbit to supplement the material that it licenses from more than 1,000 sources, including other satellite companies such as DigitalGlobe and Astrium.

Eventually, though, Skybox could turn into another Google “moonshot” — a term that CEO Larry Page has embraced for describing ambitious projects that could take several years to materialize.

Google hopes to build more satellites that could be used to beam Internet access to points around the world. That would expand an effort that Google began a year ago when it unveiled “Project Loon” — a venture featuring jellyfish-shaped balloons equipped with antennas to bring the Internet to parts of the world without the proper wiring to get online.

As the owner of the world’s most popular search engine and email service, Google typically benefits when more people are on the Internet to see the ads that generate most of the company’s annual revenue of $55 billion. Page and other Google executives say they are primarily interested in getting more people on to the Internet to create a more egalitarian and knowledgeable society.

Google made about 250 acquisitions during the past decade, using many of them to expand into new markets, including maps and mobile devices.

To the frustration of some investors, Google also has been spending billions of dollars exploring new frontiers of technology, including driverless cars, Internet-connected headwear, robots and a startup called Calico striving to find ways to slow the aging process. Other investors have applauded Google for having the vision and audacity to make big bets on bold ideas that analysts say could hatch lucrative products in the rapidly changing technology industry.

Skybox is a 5-year-old startup in Mountain View, California, located a mile-and-half from Google’s headquarters in the same Silicon Valley city. Led by aerospace industry veteran Tom Ingersoll, Skybox has been working on additional satellites that should be easier to complete with Google’s backing.

“The time is right to join a company who can challenge us to think even bigger and bolder, and who can support us in accelerating our ambitious vision,” Skybox said in a blog post.

Skybox had previously raised about $91 million in venture capital. The company says it employs about 100 people.

Google is hoping to gain regulatory approval to take control of Skybox Imaging within the next few months. The deal needs approval from the National Oceanic and Atmospheric Administration, as well as the Federal Communications Commission.

Is This the End of the Apple Brand As We Know It?