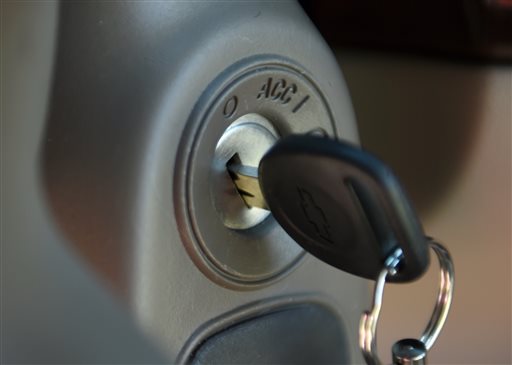 This Tuesday, April 1, 2014, file photo, shows a key in the ignition switch of a 2005 Chevrolet Cobalt in Alexandria, Va. (AP Photo/Molly Riley, File)

The compensation fund led by lawyer Kenneth Feinberg approved 399 of the 4,343 claims filed and rejected 3,944.

Camille Biros, deputy administrator of the fund, said Monday the claims that were rejected “couldn’t support any connection to the ignition switch.”

For example, she said, claims were submitted for cars that weren’t part of the recall for faulty ignition switches in older compacts such as the Chevrolet Cobalt. In other cases, the air bags inflated in the crash, an indication that the ignition switches were not at fault, Biros said.

Last year GM recalled 2.6 million small cars because the ignition switches could slip out of the run position, causing the cars to unexpectedly stall, disabling the air bags and power steering and brakes.

The fund has made offers in 124 death cases and 275 injury crashes. Of those, 325 were accepted, eight rejected and 65 haven’t decided.

Families of those who died will get at least $1 million. GM has set aside $625 million to compensate people.

GM said in a second-quarter filing with securities regulators that it had paid $280 million to compensate ignition switch crash victims and their families as of July 17.

The company said it faces 181 wrongful death or injury lawsuits due to recalled vehicles in the U.S. and Canada.

This story has been corrected to show that one additional injury claim was deemed eligible for compensation in the past week, not two.

Belk to Sell Itself and Go Private in $3B Deal