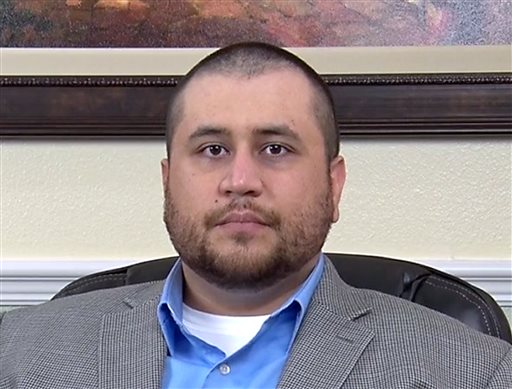 This image taken from a video released by attorney Howard Iken on Wednesday, March 12, 2014, shows George Zimmerman, the former neighborhood watch volunteer who was acquitted of murder for fatally shooting Trayvon Martin, during an interview in Orlando, Fla., on Friday, March 7, 2014. The video was made by Iken who is representing Zimmerman in his divorce. In the video, Zimmerman says hes trying to be a good person and he thinks he can help others after what he has gone through. (AP Photo/Howard Iken)

(Salon) – George Zimmerman, the killer of Trayvon Martin who was last seen hawking paintings of the Confederate battle flag that praised the Second Amendment, took to Twitter in the wake of yesterday’s shootings of Alison Parker and Adam Ward to condemn the “Black [piece of shit]” who murdered them and the “Ignorant Baboon” in the White House who mentioned gun control in his comments about their murders.

Presumably because he knows a thing or two about killing people in cold blood, Zimmerman expounded at Twitter-length on the murders of Parker and Ward, writing first that:

“Pansy” is, of course, a reference to the fact that the shooter, Vester Flanagan II, was a homosexual, which is relevant here because Zimmerman inexplicably chose to make it so. Flanagan’s motivations, at least as they were communicated in his 23-page-long manifesto, were based on a combination of a personal grudge against Ward and his feelings about the massacre in Charleston, South Carolina earlier this year. But Zimmerman felt it necessary to denigrate his sexuality anyway, as well as complain about what to him was the lack of timely manner in which President Barack Obama addressed the murders.