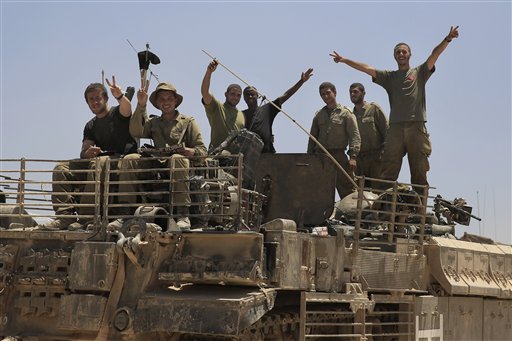 Israeli soldiers give the victory sign on the top of armored vehicle near the Israel Gaza border, Tuesday, July 29, 2014. (AP Photo/Tsafrir Abayov)

WASHINGTON (Businessweek.com)—Reaction was swift after a top Pentagon official’s testimony to Congress yesterday that he would support sending U.S. advisers to accompany Iraqi troops into battle against Islamic State if airstrikes fail.

White House spokesman Josh Earnest said Army General Martin Dempsey, the chairman of the Joint Chiefs of Staff, “was referring to a hypothetical scenario” and the president does not believe “it would be in the best interest” of the U.S. After Dempsey’s comments, Islamic State militants released a 52-second video suggesting its fighters will kill U.S. troops in Iraq if sent, the Associated Press reported.

“The reality is they’re not going to be able to be successful against ISIS strictly from the air, or strictly depending on the Iraqi forces or the Sunni tribes acting on their own,” former U.S. Defense Secretary Robert Gates said today, using an acronym for Islamic State.

“So there will be boots on the ground, if there’s to be any hope of success in the strategy,” Gates said on “CBS This Morning.”
READ MORE

Brazil’s Indigenous Seek Out City, End Up in Slums