From Traffic Stop to Fiery Uproar, a Look at the Watts Riots
Advertisement 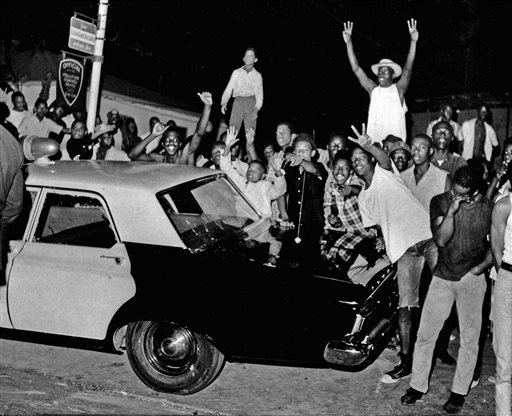 In this Aug. 12, 1965 file photo, demonstrators push against a police car after rioting erupted in the Watts district of Los Angeles. It began with a routine traffic stop 50 years ago this month, blossomed into a protest with the help of a rumor and escalated into the deadliest and most destructive riot Los Angeles had seen. (AP Photo, File)

LOS ANGELES (AP) — It began with a routine traffic stop, blossomed into a protest with the help of a rumor and escalated into the deadliest and most destructive rioting Los Angeles had seen. The Watts riots broke out Aug. 11, 1965, and raged for most of a week. When the smoke cleared, 34 people were dead, more than a 1,000 were injured and some 600 buildings were damaged.

The following is a look at the event and its impact 50 years later.

On a hot summer evening near the predominantly black Los Angeles neighborhood of Watts, a white California Highway Patrol officer pulled over Marquette Frye, 21, for reckless driving, according to a report commissioned by the governor.

When the black man failed a sobriety test, an older brother who was a passenger in the car walked two blocks home and returned with their mother so she could drive the car home. When his mother scolded him for drinking and driving, Frye, who had been cooperative, moved toward a crowd that had grown from a couple dozen to nearly 300 people. He cursed the police and said they would have to kill him to take him away.

In the ensuing scuffle, a patrolman struck Frye in the head with a baton and his mother jumped on another officer.

After police arrested the mother and both sons, someone in the growing, hostile crowd spit at officers. Patrolmen arrested a black woman and a man they said had been inciting the crowd.

Some in the crowd mistakenly thought the woman was pregnant because she was wearing a smock. Rumors spread that cops had roughed up an expectant black mother.

Police retreated under a hail of rocks. The riots had begun.

While an Urban League report a year earlier had painted Los Angeles as the best city in America for blacks, there were myriad problems in the community, which had grown from 75,000 in 1940 to 650,000 in 1965.

Unemployment was high, schools were bad and police were seen as a racist and abusive occupying force.

The outburst came less than a week after the federal Voting Rights Act was signed into law and a year after the Civil Rights Act.

“A lot of resentment, anger, pent-up frustration was combined with the idea that things were changing, that the country was changing,” said Gerald Horne, author of Fire This Time: The Watts Uprising and the 1960s. “You have all this progressive change taking place, but not necessarily reflected in the daily lives of people, which I think also helps to feed the frustration.”

The events have always been dubbed riots, though Horne, a history professor at the University of Houston, prefers the term uprising. While the riots weren’t organized and exploded spontaneously, there was still some sense of order.

Most of the businesses looted and torched were owned by whites. Buildings like libraries weren’t burned.

The first night of the riots, an unruly mob tossed rocks and bricks at cars and beat whites they pulled from their vehicles.

For Earl Ofari Hutchinson, 18 at the time, there was “almost a carnival-like atmosphere” to the lawlessness of the first couple days. People were jeering and cursing at police officers with impunity.

“There was that youthful thrill,” said Hutchinson, president of the Los Angeles Urban Policy Roundtable. “It was a sense of the first time of hitting back, striking back.”

Things took a more serious turn the next day. Cars were overturned and set on fire. Businesses were looted and set ablaze.

Firefighters were attacked and shot at as they tried to douse the flames.

On Friday the 13th, the worst day of the riots, the National Guard was called in.

Barricades went up. A photo shows officers in helmets behind two cars blocking the street and a sign that says, “Turn left or get shot.”

The first death was a black man caught in the cross fire between officers and the crowd.

Of the 34 people killed, most were black. The dead included a fireman, a deputy sheriff and Long Beach policeman.

Coroner’s inquests into 32 deaths found 26 were justifiable homicides, most by the LAPD and guardsmen. Five deaths were homicides and one was an accident.

Damage estimated at $40 million covered nearly 50 square miles, much of it beyond the borders of Watts. A third of the 600 buildings damaged were totally destroyed by fire.

Few of those things were realized.

Today, the Watts neighborhood is largely Hispanic, but remains poor. Unemployment is high.

Relations have improved with police and the department’s force is now diverse. But that change came over decades and after a different commission’s report following the far more destructive 1992 riots, a scandal involving corrupt officers and a federal consent decree that required the department to take action.

The county-run Martin Luther King Jr. hospital, opened to care for the poor in the aftermath of the riots, was plagued for years with problems and closed in 2007 because of shoddy care and patient deaths.

In one sign of a hope, a new hospital was inaugurated Friday to serve the community.

Even though Detroit rioting in 1967 surpassed the death and damage toll in Los Angeles, Watts remains a common reference point when protests against police turn violent.

The name was invoked in the past year after unruly demonstrations following killings by police officers in Ferguson, Missouri, and Baltimore.

“Fifty years later, we’re still talking about it,” Hutchinson said. “Watts is kind of the granddaddy of civil disturbance.”