France to Send Weapons to Kurds in Iraq
Advertisement 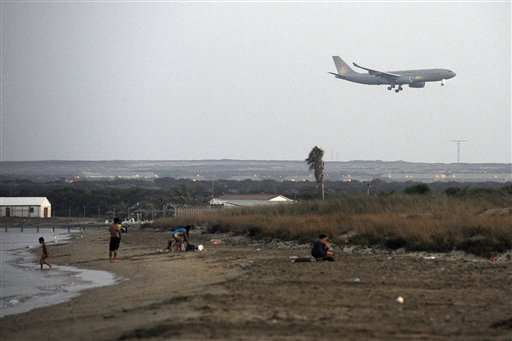 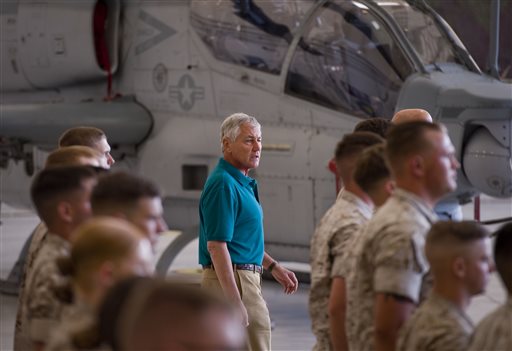 WIth Marines standing at attention, Secretary of Defense Chuck Hagel arrives at a Camp Pendleton hangar where addressed the Marines and answered questions Tuesday Aug. 12, 2014. Hagel announced the deployment of another 130 U.S. troops to Iraq in remarks to Marines at this Southern California base on the final stop of a weeklong, around-the-world trip that also took him to India, Germany and Australia. (AP Photo/The Orange County Register, Paul Rodriguez)

Paris and London have agreed to coordinate their actions on both humanitarian aid and arms, the office of President Francois Hollande said.

It said the French president spoke with British Prime Minister David Cameron Wednesday evening and agreed on the need for an “extremely rapid response,” but didn’t clarify whether Britain outright consented to furnish weapons to the Kurds, who are trying to push back radicals of the IS group.

Foreign Minister Laurent Fabius refused to specify the type of arms France would deliver, saying only they would be “sophisticated.”

The sudden announcement that arms would begin to flow within hours underlined France’s alarm at the urgency of the situation in Iraq, where the IS group fighters are threatening the autonomous Kurdish region in northern Iraq.

The shipping of French arms follows the United States’ increased role in fighting back the Islamic extremists, including air strikes to protect U.S. personnel and stop fighters from moving on civilians again.

Senior American officials say U.S. intelligence agencies are directly arming the Kurds. On Tuesday, 130 U.S. troops arrived in the Kurdish capital of Irbil on what the Pentagon described as a temporary mission to coordinate plans to help trapped Yazidi civilians on Mount Sinjar.

Any French military strikes would need prior approval from the U.N. Security Council, a standard French position, and would take place only if conditions are right, Fabius said.

A French diplomat close to the situation would not exclude eventual French strikes in an “evolving situation.” The diplomat asked not to be named because the person was not authorized to publicly discuss French policy.

France says its arms shipment was coordinated with the Iraqi government.

French authorities have pushed other European Union members to do more to aid Christians and other minorities being targeted by the Islamic State group extremists.

EU foreign ministers will hold an emergency meeting Friday to coordinate their approach to the crisis and to endorse the European arms shipments already announced, the EU said Wednesday.

Cameron cut short his vacation to chair a session of the U.K. emergency security committee.

He declined to say whether the Chinook helicopters being deployed to the region would be used to evacuate displaced people but said detailed plans were being put together to get the besieged minorities off of Mount Sinjar.

The turmoil stems from the quick advance of the IS group and allied Sunni militants across northern and western Iraq in June. The insurgency seized Iraq’s second largest city, Mosul, and routed Iraq’s beleaguered armed forces. Thousands of people have been killed and more than 1.5 million have been displaced by the violence.

Associated Press writers Elaine Ganley and Sylvie Corbet in Paris, Juergen Baetz in Brussels and Danica Kirka in London contributed to this article.