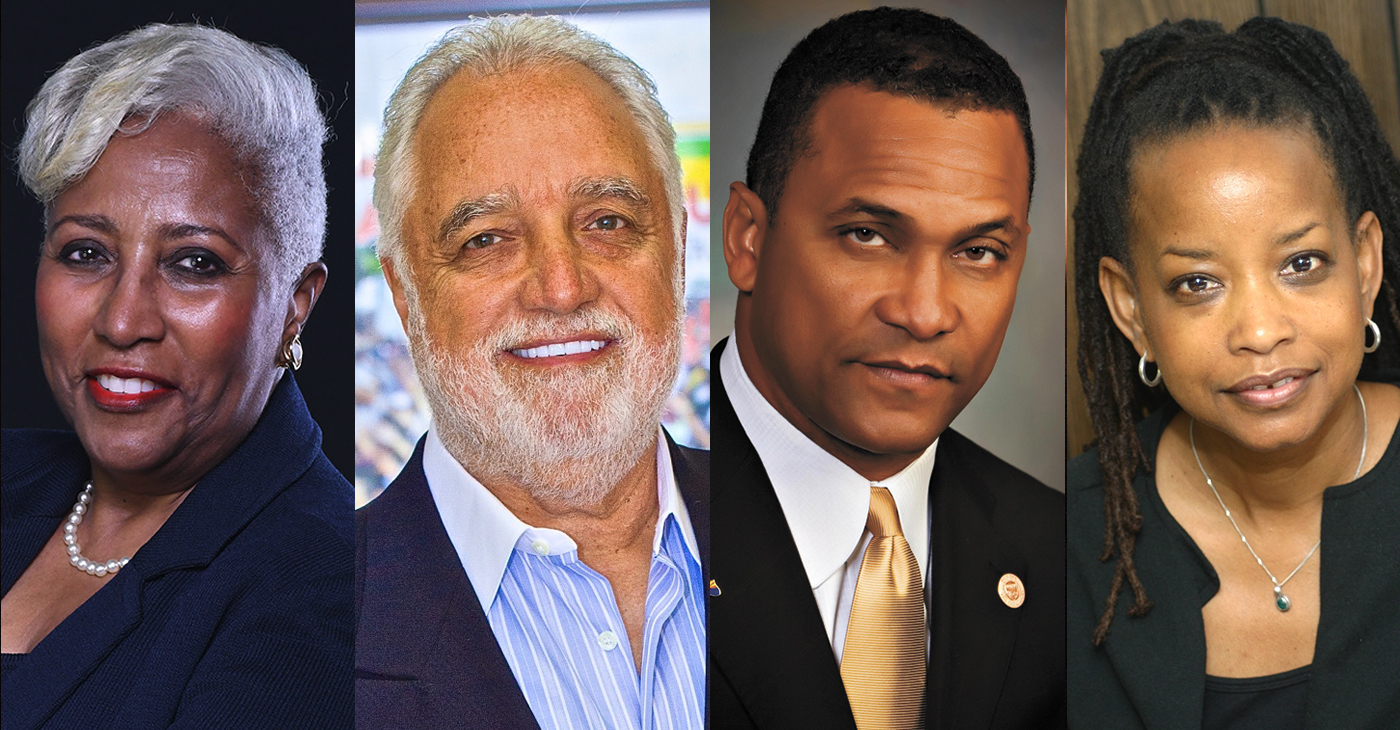 Former Chairpersons of the National Newspaper Publishers Association’s Board of Directors (left to right): “Sonny” Messiah Jiles, the CEO of the Houston Defender Media Group; Danny Bakewell, Sr., publisher of the Los Angeles Sentinel; Cloves Campbell, publisher of the Arizona Informant; and Denise Rolark Barnes, publisher of the Washington Informer.

Part One in a series, as the NNPA prepares to Celebrate 80Years as the Voice of Black America

The role of chairman of the board in any organization comes with responsibilities that require for the broadest of shoulders.

According to a definition found at bizfluent, a board’s chairperson is the person who serves as the senior representative of the shareholders and is responsible for upholding their interests.

However, whether it was taking a stand for the Double V campaign during World War II; marching with Dr. Martin Luther King Jr. during the Civil Rights Movement; or fighting to have a voice in the White House in more recent times, NNPA’s board chairpersons’ responsibilities have historically gone far beyond any standard business definitions.

“As NNPA chair, it is important to have integrity, build consensus, listen to different points of view, be a communicator, take the initiative, and possess the foresight to think where the puck will be –not where it is now — and act accordingly,” said Sonceria “Sonny” Messiah Jiles, the CEO of the Houston Defender Media Group and a former NNPA chair.

Jiles, who was elected chair in mid-2003 and served through mid-2005, said the high points of her tenure included securing the first $4.1 million buy from Home Depot for NNPA members; cleaning up and aligning the organization’s operational systems in accordance with Sarbanes Oxley; and establishing convention sponsorship packages covering two-three year periods, that ensured revenue continuity.

“The biggest challenge of the NNPA chair is to generate revenue for both small- and large-market newspapers, create products and services that benefit the membership’s bottom line and building a consensus when there are so many personal or hidden agendas,” Jiles said.

Danny Bakewell, Sr., the publisher of the Los Angeles Sentinel who chaired the NNPA from 2009 to 2011, said it was an honor to serve his fellow publishers and lead the organization through various changes in the media landscape.

“My publishers knew of my activism and [at the time I was elected], it was a good time in my life, and I decided to give it I shot,” Bakewell said.

“When I came in, there was basically no infrastructure, so I’ve got to be chairman and CEO and I’ve got to make decisions to make this thing work,” he said.

Bakewell said he created a plan on how to create partnerships in which the goal was to get five partners that would agree to three- or five-year commitments that would bring in significant revenue for the NNPA.

“It meant that we weren’t begging because we knew we had money coming in and I established a policy that we’d go out and raise money for every event knowing that we already had money,” Bakewell said.

“The real glue that made my administration successful was getting full-page ads at least once a quarter for my publishers and organizations like General Motors really gave us solid commitments and we still have them today,” he said.

As chair, Bakewell said one should never lose sight of the mission of the Black Press of America, which is to speak for the voiceless and champion the powerless.

“We put together a report when I was the chair that showed we were talking to 19.5 million black people every week, that’s powerful,” Bakewell said.

He said there were many who wanted him to remain as chair, but he leaned on an important motto learned long ago: “Good leadership knows when to come, it knows what to do and it knows when to go,” said Bakewell, who in 2010 enjoyed a historic visit to the White House where he met with then-presidential advisor Valerie Jarrett to make sure – among other things – that the NNPA was in a position to cover President Barack Obama’s administration.

Campbell, who led the organization with a strategy that included collaborating with other organizations, forming new partnerships and inviting a new generation of readers into the Black Press, served two terms concluding in 2015.

“It was an honor to serve the NNPA, which has such a rich history and it represents an important part of black history,” Campbell said.

When Campbell began, he said the NNPA had virtually no digital presence, but he’s noticed most recently the evolution of the NNPA Newswire and BlackPressUSA.com where hundreds of thousands of unique visitors come for information daily.

“Now it’s at a level where the world knows about it,” Campbell said.

As chair, Campbell said an important aspect of his duties were to work closely with the then newly-hired NNPA president and CEO, Dr. Benjamin F. Chavis, Jr.

“It’s important because the president is the spokesperson for your organization. I remember our first president, Bill Thompson, was a different type of person, but we were real fortunate to be able to select an excellent leader in Dr. Benjamin F. Chavis, Jr. Dr. Chavis, with a civil rights background, has what we were looking for in that premiere position,” Campbell said.

“Chavis is one who commands an audience and not only commands the respect from the community in the United States, but worldwide,” he said.

Washington Informer publisher, Denise Rolark Barnes, who served as NNPA chair from 2015 to 2017, echoed Campbell’s comments on the importance of the chair and president working in harmony for the good of the organization.

“As your board, we are a legal entity, and to me, we should have a chairman of the board who shares the same vision as the leader of the organization and the person that we’ve hired to lead and to be the spokesperson for the organization,” Rolark Barnes said.

“As long as you are in lockstep, there’s so much more you can accomplish for the organization,” she said.

Rolark Barnes recalled a time when the NNPA didn’t have the resources to operate in the manner it currently does, but she said the organization always had an executive director or a president – a set-up that’s required under law for any nonprofit.

“When you have someone in that position with the title of president who’s respected, who has an ability to connect with organizations, that’s important because we on the board cannot do that… we have to maintain our legal status,” Rolark Barnes said.

During her tenure, Rolark Barnes said she understood that there would be times when the board would dictate what the chair would do, but it’s the president who leads based on what the board has instructed.

“Members have to have leadership that works hard on their behalf and works together. You have to listen to your membership and strive to work together because that’s what makes for a stronger organization,” she said.

Two years after her tenure, Rolark Barnes remains very much involved on the board.

She said she decided to run for chair after attending board meetings, taking copious notes and realizing that she could help the organization.

“It became crystal clear to me what I could do to lead the organization beyond stagnation into a new era of solvency, productivity, and resiliency,” Rolark Barnes said.

“I was incredibly proud to serve alongside a progressive-thinking executive committee and a board that supported, and sometimes challenged, our decisions,” she said.