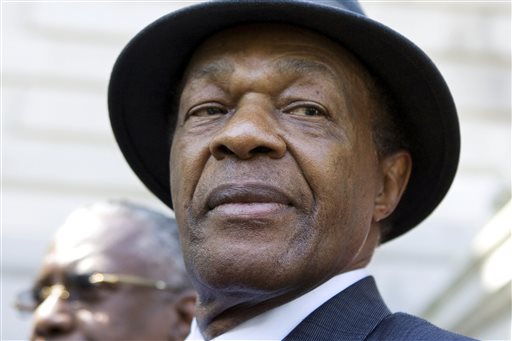 WASHINGTON (AP)— Divisive and flamboyant, maddening and beloved, Marion Barry outshone every politician in the 40-year history of District of Columbia self-rule. But for many, his legacy was not defined by the accomplishments and failures of his four terms as mayor and long service on the D.C. Council.

Instead, Barry will be remembered for a single night in a downtown Washington hotel room and the grainy video that showed him lighting a crack pipe in the company of a much-younger woman. When FBI agents burst in, he referred to her with an expletive. She “set me up,” Barry said.

Barry died Sunday at 78. His family said in statement that Barry died shortly after midnight at the United Medical Center, after having been released from Howard University Hospital on Saturday. No cause of death was given, but his spokeswoman LaToya Foster said he collapsed outside his home.

Speaking at a 4 a.m. press conference at United Medical Center, the city’s mayor-elect Muriel Bowser called Barry an “inspiration to so many people and a fighter for people.”

“Mr. Barry, I can say this, lived up until the minute the way he wanted to live,” said Bowser, who had served with Barry on the D.C. Council.

The year was 1990, and crack cocaine had exploded in the district, turning it into the nation’s murder capital. In his third term, the man known as the “Mayor for Life” became a symbol of a foundering city.

Federal authorities had been investigating him for years for his alleged ties to drug suspects, and while he denied using drugs, his late-night partying was taking a toll on his job performance.

The arrest and subsequent conviction – a jury deadlocked on most counts, convicting him of a single count of drug possession – was a turning point for Barry. He had been elected to his first term as mayor in 1978 with broad support from across the city. With his good looks, charisma and background in the civil rights movement, he was embraced the dynamic leader the city’s young government needed. The Washington Post endorsed him in each of his first three mayoral runs, although the 1986 endorsement was unenthusiastic.

Barry’s six-month term in federal prison was hardly the end of his political career. But it forever changed how it was perceived. To some, he was a pariah and an embarrassment. But to many district residents, particularly lower-income blacks, he was still a hero, someone unfairly persecuted for personal failures.

Barry returned to the D.C. Council in 1992, representing the poorest of the city’s eight wards. Two years later, he won his fourth and final term as mayor. The electorate was starkly divided along racial lines, and Barry advised those who had not supported his candidacy to “get over it.”

“Marion Barry changed America with his unmitigated gall to stand up in the ashes of where he had fallen and come back to win,” poet Maya Angelou said in 1999.

Barry’s triumph, though, was short-lived. In 1995, with the city flirting with bankruptcy from years of bloated, unaccountable government, much of it under Barry, Congress stripped him of much of his power and installed a financial control board. Barry held authority over little more than the city’s parks, libraries and community access cable TV station. He decided against seeking a fifth term.

Barry spent a few years working as a municipal bond consultant, but he couldn’t stay away from politics. In 2004, he returned to the council, again representing Ward 8, where he remained beloved. Many constituents still referred to him as “Mayor Barry,” and he was re-elected in 2008 and 2012.

Barry was born March 6, 1936, to Marion and Mattie Barry, in the small Mississippi delta town of Itta Bena, and was raised in Memphis, Tenn., after the death of his father, a sharecropper.

While an undergraduate at LeMoyne College (now LeMoyne-Owen College), Barry picked up the nickname “Shep” in reference to Soviet propagandist Dmitri Shepilov for his ardent support of the civil rights movement. Barry began using Shepilov as his middle name.

Barry did graduate work in chemistry at Fisk University in Nashville, Tenn., earning a master’s degree. He left school short of a doctorate to work in the civil rights movement.

His political rise began in 1960, when he became the first national chairman of the Student Non-Violent Coordinating Committee, which sent young people into the South to register black voters and became known as one of the most militant civil rights groups of that era.

Barry’s work with the committee brought him to Washington, where he became immersed in local issues, joining boycotts of the bus system and leading rallies in support of the city’s fledgling home rule efforts.

In 1970, The Post wrote: “Four years ago widely considered a young Black Power Militant with almost no constituency, (Barry) has become a man who is listened to – if not fully accepted – on all sides.”

In 1977, he was wounded by a shotgun blast in the Hanafi Muslim takeover of D.C.’s city hall. A young reporter was killed. The shooting was credited with strengthening him politically.

In 1978, he defeated incumbent Mayor Walter Washington – the city’s first home rule mayor – in the Democratic primary and went on to easily win the general election.

Barry’s early years in office were marked by improvement in many city services and a dramatic expansion of the government payroll, creating a thriving black middle class in the nation’s capital. Barry established a summer jobs program that gave many young people their first work experience and earned him political capital.

In his second term, the district’s finances were rockier, and some of his appointees were caught up in corruption scandals.

The city’s drug-fueled decline mirrored Barry’s battles with his personal demons, leading to the infamous hotel room arrest on Jan. 19, 1990. The video of Barry was widely distributed to the media and made him infamous worldwide.

A few months after his arrest, long-time civil rights advocate and educator Roger Wilkins, a past supporter, wrote in The Post: “Marion Barry used the elders and lied to the young. He has manipulated thousands of others with his cynical use of charges of racism to defend his malodorous personal failures.”

Even after his comeback, controversy continued to dog Barry. Several times after his 1990 arrest, Barry sought treatment or counseling for problems with prescription medications or other substances. In 2002, he made an attempt to seek an at-large seat on the D.C. Council but abandoned his bid amid allegations of renewed illegal drug use.

In 2006, Barry was given three years of probation after pleading guilty to misdemeanor charges for failing to file tax returns from 1999 to 2004. As part of a plea bargain, he agreed to file future federal and local tax returns annually, a promise prosecutors later said he had failed to keep.

In 2010, he was censured by the council and stripped of his committee assignments for steering a government contract to a former girlfriend. The council censured him again in 2013 for accepting cash gifts from city contractors.

Barry played the role of elder statesman in his later years on the council, but he sometimes exasperated his colleagues with his wavering attention at meetings and frequent, rambling references to his tenure as mayor.

He suffered numerous health problems over the years. In addition to kidney failure, he survived prostate cancer, undergoing surgery in 1995 and a follow-up procedure in 2000. In late 2011, he underwent minor surgery on his urinary tract. In early 2014, he spent several weeks in hospitals and a rehabilitation center battling infections and related complications.

In a statement Sunday, current Mayor Vincent C. Gray expressed deep sadness after learning about Barry’s death. Gray spoke with Barry’s wife, Cora Masters Barry, late Saturday and shared his condolences and sympathies with her. The couple was long estranged but never divorced.

“Marion was not just a colleague but also was a friend with whom I shared many fond moments about governing the city,” Gray said. “He loved the District of Columbia and so many Washingtonians loved him.”

Mayor Gray said that he would work with Barry’s family and the Council to plan official ceremonies “worthy of a true statesman of the District of Columbia.”

Barry was married four times and is survived by his wife, Cora, and one son, Marion Christopher Barry.

Copyright 2014 The Associated Press. All rights reserved. This material may not be published, broadcast, rewritten or redistributed.
###

Father of Boy, 12, Gunned Down by Police Questions Cops