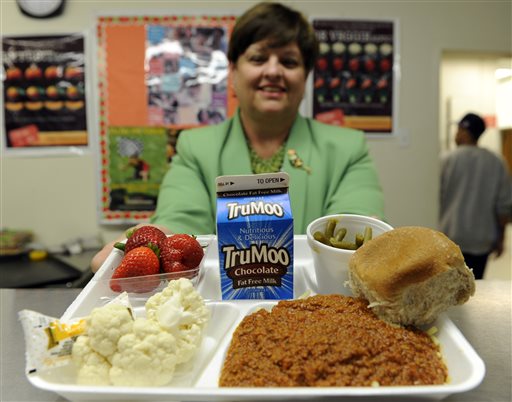 In this Tuesday, April 29, 2014 photo, Becky Domokos-Bays, the director of food and nutrition services at Alexandria City Public Schools, holds up a tray of food during lunch at the Patrick Henry Elementary School in Alexandria, Va. (AP Photo/Susan Walsh)

(Politico) – As the Republican battle against Michelle Obama’s school lunch standards resumes in Congress later this month, some food giants are quietly backing away from their fight with the first lady.

Many companies, such as Schwan’s, that once vigorously fought key elements of the initiative to trim sodium, fat and calories from school menus have actually done a bang up business since the requirements took effect by adapting their products for the $10 billion market.

And now that they have won acceptance for retooled recipes — among them, whole-grain rich Pillsbury breakfast cinnamon rolls, reduced-sodium Schwan’s Big Daddy’s pizza and reduced-fat Doritos — some food makers don’t want the rules to change again as Congress works to reauthorize the law that expires Sept. 30.

“I think a large percentage doesn’t want to change at all,” said Gary Vonck, vice president of the education division at KeyImpact Sales & Systems, a food service distribution company. “I think they feel like they’ve gone through all the changes they need to go through to follow the rules.”

Obese at 50? Midlife Weight May Affect When Alzheimer’s Hits