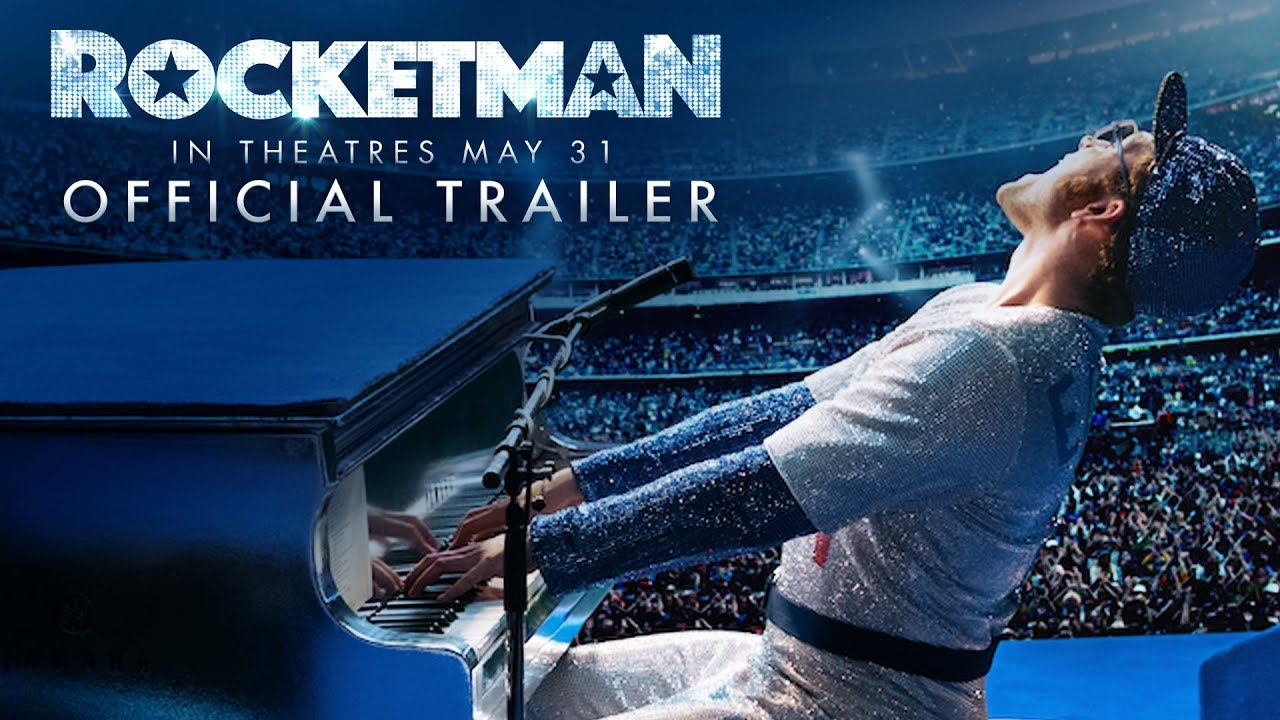 Young pianist/songwriter Reginald Dwight (Targon Egerton) gets some good advice from a very wise soul singer (Jason Pennycooke, Mister Lonely): “Kill the person you were born to be, to become the person you want to be.” If that couldn’t goad the very staid Dwight into creating his new flamboyant Elton John persona, nothing could.

The music of Elton John, and lyrics by his writing partner Bernie Taupin, have set music industry records, including the #1 single of all time, “Candle in the Wind.” They’ve sold 250 million records in a streak that has lasted from 1970 to now. This R-rated, bio/musical/fantasy covers John’s innocent youth, personal life, career, drug addiction, sexual dalliances, love life, relationships and rehabilitation—from 1960 to 1990.

Director Dexter Fletcher (Eddie the Eagle and co-director of Bohemian Rhapsody) along with screenwriter Lee Hall (Billy Elliot) took a risk when they decided to not only show John singing in studios, clubs or concert halls. Their strategy involved the pop icon and other characters breaking into song at home, in the middle of conversations and in odd places. This gimmick, off-putting at first, takes a while to get used to. But, after you do, it’s fun.

Watch the screen for more than 10 minutes and you get the feeling that you are viewing a midnight-movie cult classic. There are quirky, indelible scenes that will stick in your mind: Elton jumps into a pool, plastered out of his head and at the bottom he sees a younger version of himself playing a piano and looking up at him innocently. The colors are well saturated, the lighting luminescent and the cinematography impeccable (George Richmond, Snow White and the Huntsman).

Whether John is in his family’s modest home, lounging in his palatial L.A. mansion or dancing in a club, his surroundings look larger than life: Credit the set decorators Kimberly Fahey and Judy Farr for the ornateness. Kudos to production designers Peter Francis and Marcus Rowland for the majesty. The colors, textures and attention to detail by art directors Sophie Bridgman, Steve Carter, Emily Norris, Astrid Sieben and Alice Walker are impressive.

Scenes are pulled together tightly (editor Chris Dickens) and erratically, like you’re flipping through someone’s jumbled scrap book or viewing objects in a kaleidoscope. Yet, the plotline moves forward with a clarity that is astonishing, considering a format in which songs and singing represent thoughts and feelings that would normally be rendered in dialogue. The pacing never lags as you watch John’s life unfurl. You realize his music is a soundtrack to our lives, especially if you’re a baby boomer or an adult.

If clothes make the man (costume designer Julian Day, Bohemian Rhapsody), sequins, feathers, metallic costumes with matching shoes and gigantic glasses gave John a signature brand. Yet, it also confined him. Depending on his mood swing, he considered his eccentric and very recognizable facade both a blessing and a curse. That, coupled with his fluid sexuality, added to his inner turmoil. It tested him.

As Elton John fleshes out tunes, based on Taupin’s poetic lyrics, it’s an illuminating experience. When he croons the words to “Your Song,” it’s heartwarming: “It’s a little bit funny this feeling inside, I’m not one of those who can easily hide…” So many of his songs are moving, beautiful, enduring and will peak your emotions.

Unlike Remy Malek in Bohemian Rhapsody, Targon Egerton sings all the songs in Rocketman. There are times when he sounds like himself. Times when he sounds like a hybrid of John and him. And then there are those golden moments when you’re looking at Egerton and hearing the purest echoes of Elton’s voice:  e.g. “Don’t Let the Sun Go Down on Me.”  Though his vocals are just close to perfect, his interpretation of John is perfect. Targon looks like him so much, it’s as if he’s stolen John’s aura. His fits of anger, fear, depression, humiliation, self-love and self-hate are as authentic as they can be.

Jamie Bell as John’s rain-or-shine friend Bernie plays the enabler, savior and brother-from-another-mother quite well. The lyricist and the musician had a famous bromance that has to be one of the first straight/gay friendships ever put before the media.

Howard, as John’s mom, strikes the right balance of mentor and homophobe. Sheila says to Elton: “You’re choosing a life of being alone. You’ll never be loved.” The second most interesting performance, next to Egerton’s, is by Richard Madden (TV’s Bodyguard) as John Reid, Elton’s smarmy manager and opportunistic lover. Every drama needs a villain, and Madden is that man.

The potpourri styling in this film will leave you with a barrage of unforgettable images that cover several eras. Keep an eye out for the aforementioned pool scene; also look out for the rockets bursting into space and the “Benny and the Jets” disco scene that looks like it’s straight out of a Pier Paolo Pasolini film.

Rocketman is a fun, trippy hallucinogen. It’s like dropping a tab of LSD and having 1970s flashbacks.