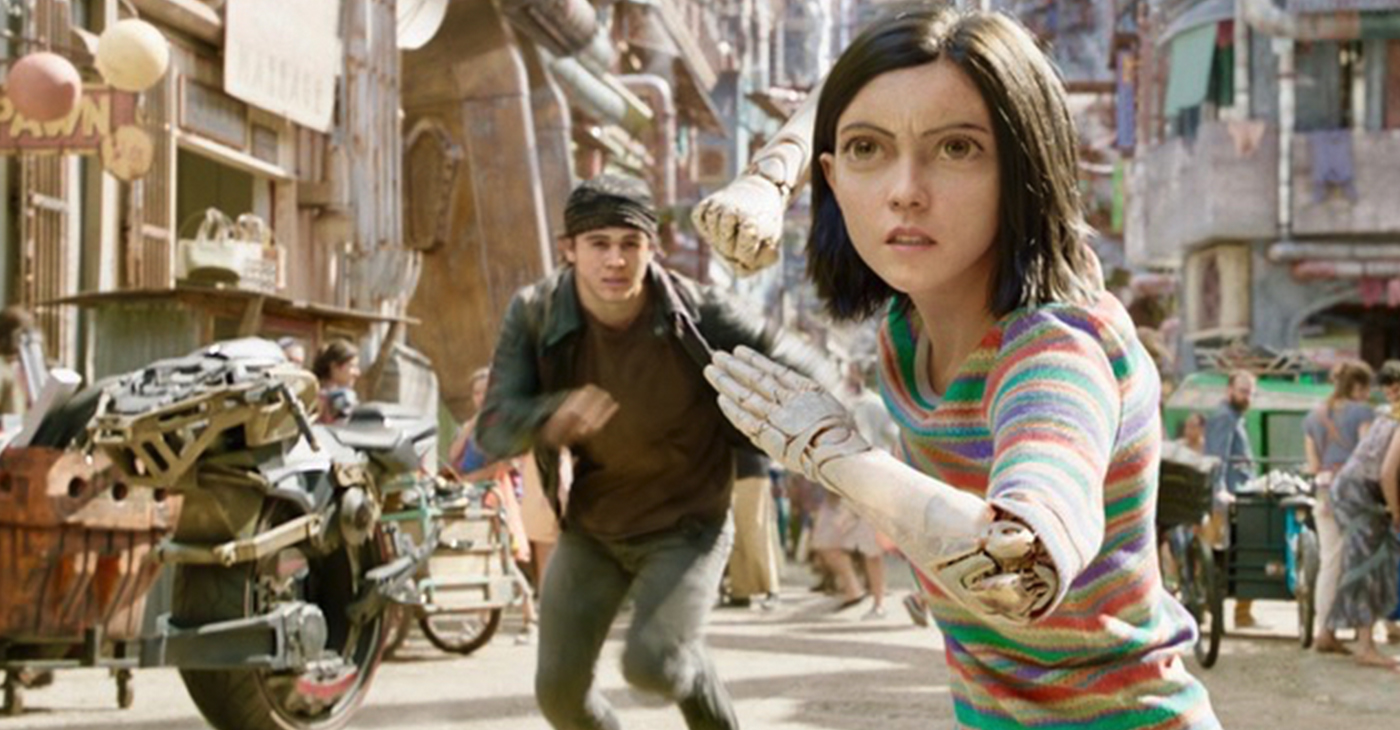 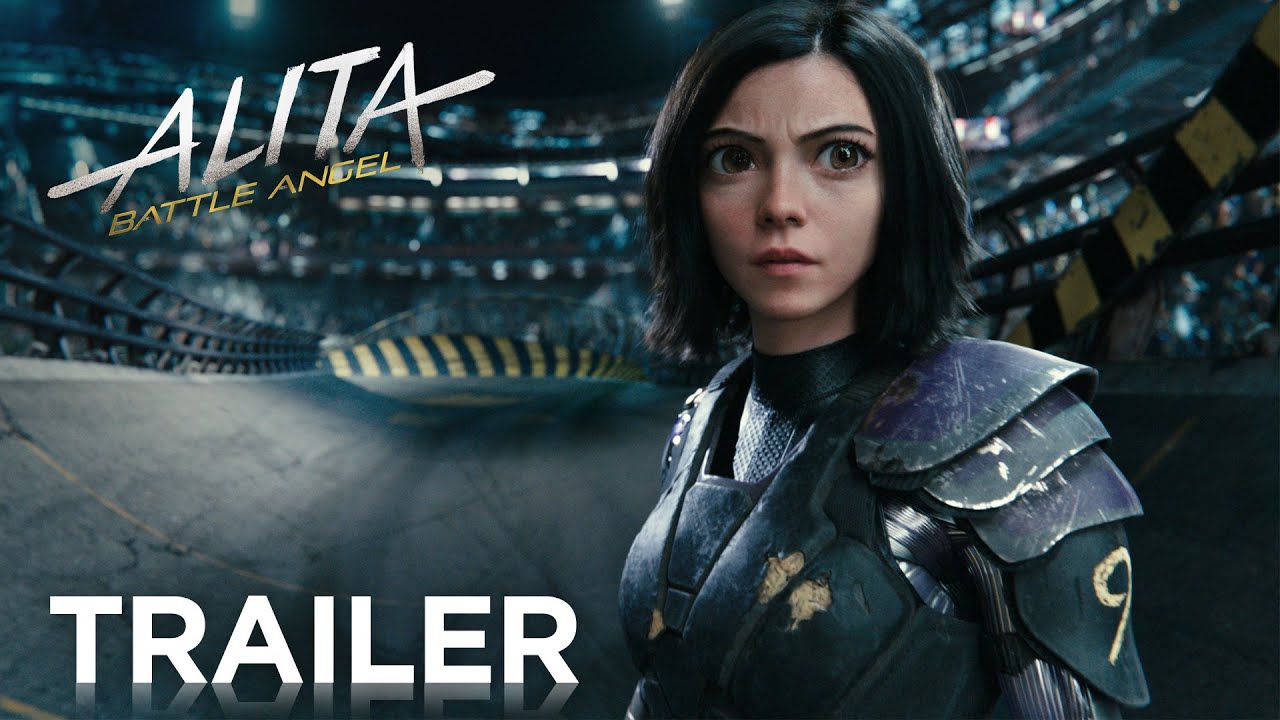 As a self-contained film, this sci-fi/anime/action/thriller is fascinating but not perfect. Viewed as a set-up for a future franchise, it makes more sense. Studied as the next advancement in 3D anime, it’s groundbreaking. And, a teenage Latina lead is unique and could bring a host of young movie goers into the theater to see what’s up.

Even if you didn’t know who the filmmakers were, you’d get a hint based on what you see: The main cyborg creation, Alita (Rosa Salazar), is reminiscent of James Cameron’s Avatar characters. The manic pacing of the film and its rough-around-the-edges, aggressive style and perceptive look at youth plays like a combination of Robert Rodriguez projects (From Dusk Till Dawn, Spy Kids, Sin City). If Cameron and Rodriguez had a lovechild, their offspring would be this teen-friendly movie.

Far into the future, in 2563, after the great apocalypse called “the Fall,” only remnants of civilization remain. One of the surviving homesteads on Earth is Iron City, a gutted metropolis. There’s nothing but ruins, killer robots and those—people and cybernetically-enhanced-humans—who have found ways to survive by repurposing tech. Lurking above the horizon is the ominous looking Sky city Zalem. The unwritten rule is “nobody ever goes up to Zalem,” so transport between the landbound town and the one up high is nearly non-existent. That separation has made Iron City residents covet a trip above.

Co-writers Cameron, Rodriguez and Laeta Kalogridis based their script on the book Gunnm, part of a graphic novel series by Yukito Kishiro. The exterior sets often look like helter-skelter way stations from a Star Wars movie or the darkened streets of New Orleans, with curious looking people filling crowd scenes, hoverboards whizzing by, an incessant din and people running to and fro. 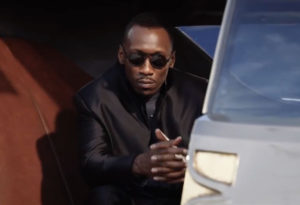 The visuals are intriguing: Caylah Eddleblute and Steve Joyner production design; Jeff B. Adams Jr. art direction; and David Hack set decoration. The digital-FX is progressive. Two high-definition cameras recorded Salazar’s face, giving her eyes more definition than the entire Gollum character from Lord of the Rings. Ninety-nine percent of the footage was shot with state-of-the art 3D-cameras (cinematographer, Bill Pope, The Matrix), when other films are shot and then converted to 3D. So, the cyborgs look vivid, the cityscapes are striking and there’s plenty of eye candy for everyone—especially sci-fi freaks.

People fend for themselves, so it is no surprise when Ido (Christoph Waltz), a cyberphysician, is rummaging through a scrap heap and discovers the torso and head of a young angelic looking cyborg. Back in the lab, after a body is attached to her, she is revived. Ido’s creation, Alita, can’t remember who she was or how she got to the junkyard. Slowly she adapts to life, exhibiting latent fighting skills and killer instincts.

Hanging out with street kids, like Hugo (Keean Johnson) and his crew, she learns more and more about her capabilities. Her actions are noticeable in her community, and not by the right people. Alita is under the gaze of Vector (Mahershala Ali), an evil dude who runs the corrupt forces in the city, and he is controlled by a much higher power—someone on Zalem. 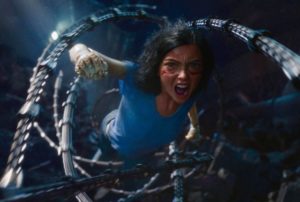 As the story evolves and Alita slowly learns of her past and masters her warrior powers, the audience is taken on an intriguing journey of self-discovery. Fortunately, this ride-along counteracts the film’s imperfections: The post-Armageddon municipality is not the most original setting in the world. The mysterious city hovering overhead will remind audiences of the film District 9, when a stealth spaceship floats over Johannesburg, South Africa. Also, Alita doesn’t exhibit any superpowers viewers haven’t seen before.

The introduction of the ultra-competitive and deadly sports event Motorball—a combination of roller blading, basketball, skate boarding and rugby—as a central focus is a tough sell. The game plays out like chariot racing in Rome’s Colosseum or a frenzied NASCAR event. This sports shtick is consequential to Alita, Hugo and other participants because the winner is promised a trip to Zalem, which is about the only way anyone will ever get there. Initial skepticism regarding this plot strategy will subside and make more sense as the film ends.

This very ambitious production could lose some weight. The constant barrage of minuscule plot points, names, rivalries and heavy exposition can be confusing. Adults may have trouble sorting out all the details. Young people may not care or be intimidated by the minutia. The pacing of the action scenes could keep their attention (2hr 2min runtime), the peculiar mechanics of the cyborgs may enthrall them—and there’s always Alita. 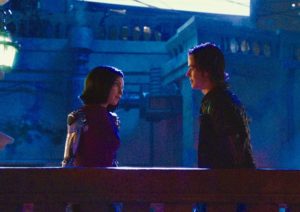 The heart of the film is this vulnerable young hybrid amnesiac woman. She falls in love, is haunted by her past and fights the bad guys. It’s a lot on her shoulders, and with Rodriguez’s sensitive feel for kids, the film allows her to embody the challenges and insecurities tweens/teens encounter—especially girls and young women. Alita questions Hugo: “Does it bother you that I’m not completely human?” Hugo: “You’re the most human I’ve ever met.”

Rosa Salazar (Bird Box, Maze Runner: The Death Cure and a voice in the video game Batman: Arkham Origins) uses her voice, facial expressions and movement to make an alluring mark on the character. Her acting magically brings Alita to life. Mahershala Ali as the venomous antagonist underplays his role, making Vector seem all the more deadly. The rest of the supporting cast with Jennifer Connelly as Ido’s ex-wife, Jorge Lendeborg, Jr (Bumblebee) as Hugo’s pal, Idara Victor as Nurse Gerhad along with the aforementioned Waltz and Johnson keep emotions piqued.

Granted, there’s room to improve and grow. Still, Alita: Battle Angel is a solid start to what could be a welcomed series of films. It takes FX to another level and teens and sci-fi fans could gladly jump on a bandwagon that features a new and iconic Latina heroine.

COMMENTARY: Black Boys Need Rites of Passage Programs in 2019 Across the Country