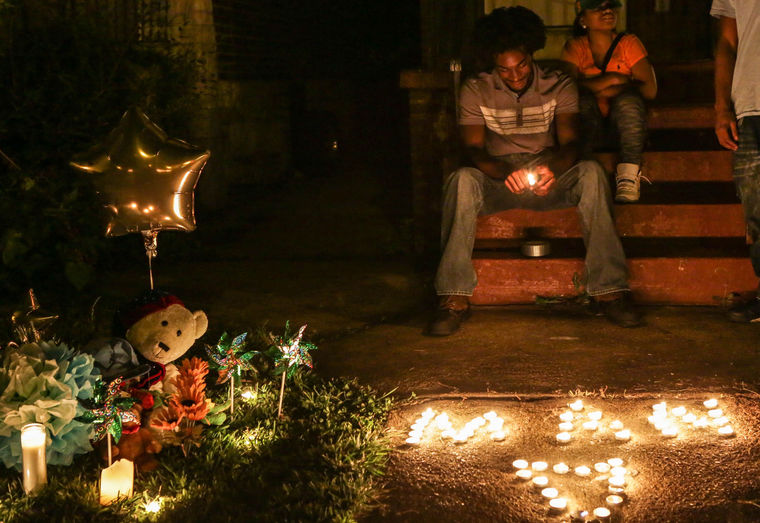 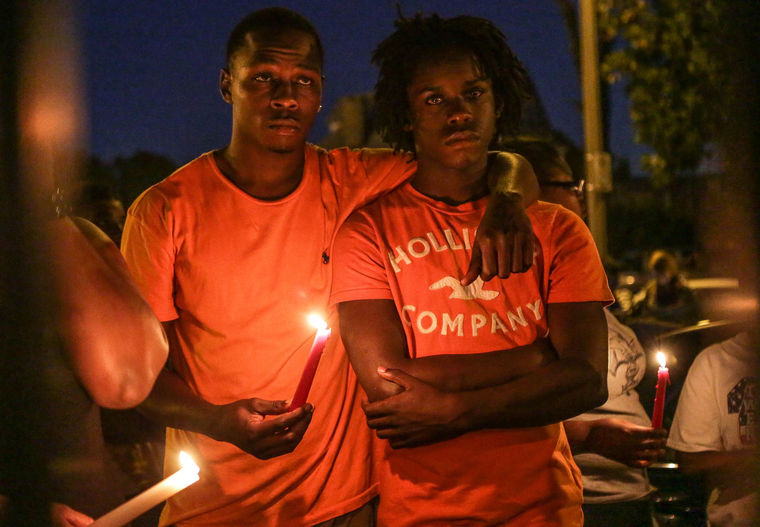 by Kenya Vaughn
Special to the NNPA from The St. Louis American

“Hey, how have you been,” said Cathy Daniels, affectionately known to Ferguson protesters as “Mama Cat.” She walked around greeting people Thursday night at the intersection of Page and Walton – near where 18 year-old Mansur Ball-Bey was fatally wounded by St. Louis City Police around noon the day before.

“It’s been a long time,” she said recognizing a face she had become familiar with during the thick of the Ferguson protests.

There were about 150 who had gathered in the Fountain Park neighborhood of St. Louis City for a vigil in Ball-Bey’s memory.

The vigil itself was extremely brief. A prayer and a few remarks from friends and family was the extent of the commemoration.

The family stayed close together and seemed to shield Ball-Bey’s parents from unwanted media attention.

For everyone else, most of the time following the vigil was spent in fellowship.

Mama Cat, like many others, had probably rushed over from the vigil for Jamyla Bolden, the 9-year-old tragically killed from a stray bullet while inside her Ferguson home.

It was in Ferguson where Mama Cat had become an instantly recognizable source of comfort for protesters during the months of unrest that ensued in response to the death of Michael Brown Jr. last year.

“We’ve got to stop getting together under these circumstances,” Mama Cat said.

As she spoke of the second vigil for a youth’s lost life in one night, the warm and endearing smile she is known for left her face.

“We’ve got to stop meeting like this,” she couldn’t help but say again as she shook her head somberly before coming back to her normal demeanor.

She then went about her usual business of greeting protesters and attempting to nourish them with snacks.

“Help yourself baby,” Mama Cat said to a young woman – who clearly didn’t know her. Mama Cat caught the woman eyeing a selection of snacks in a bin being toted around by a young lady accompanying her.

“I’m out here taking care of y’all like I always do,” she said to nobody in particular – or everybody.

By that time the bin that was filled with granola bars, chips, nuts, fruit snacks and other treats was nearly empty.

A trash can on the side of the corner store where many attendees were gathered was filled to the brim with the wrappers of those who had partaken of Mama Cat’s hospitality over the course of the night.

For many, the gesture probably brought back memories of the Sunday meals Mama Cat used to cook for protesters to give them a sense of family – and calm in the midst of the Ferguson storm– particularly the Thanksgiving meal just days after the grand jury announcement that former Ferguson Police Officer Darren Wilson would not be charged for fatally shooting Brown.

Mama Cat was joined by “Rev. Renita” Lamkin, Kayla Reed of the Organization For Black Struggle, Umar Lee and 21st Ward Alderman Antonio French as some of the familiar faces from Ferguson who came to stand in solidarity with the family of Ball-Bey and the neighborhood.

Fountain Park now shares with them the common bond of battle stories that include tear gas, rubber bullets, unrest, militarized cops and confusion as the community also became undone in response to a death at the hands of law enforcement.

The mood of those who gathered on both sides of the street of Walton on Thursday was much more relaxed than the evening before, though it remains to be seen if Fountain Park will be as prolific in protest as Ferguson.

With the exception of one woman with a short and pristinely groomed gray afro, the gathering was more of a fellowship than protest or public demonstration.

“What do we want” she yelled as she marched up and down the block by herself holding a sign that read “Stop Killer Cops.” “Justice,” the crowd chanted back. “When do we want it,” she continued.

Eventually a crowd of about 60 marched through the Central West End and back before dispersing for the night.