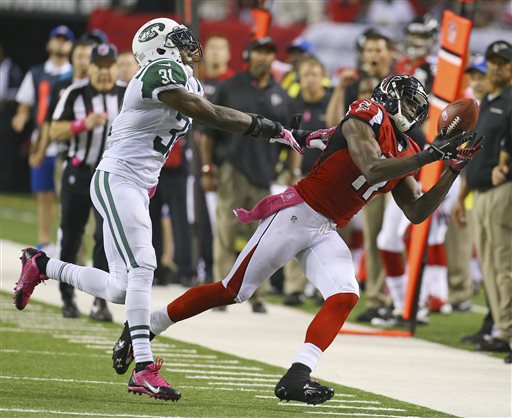 FLOWERY BRANCH, Ga. (AP) — The Atlanta Falcons’ fears were confirmed on Wednesday when a second medical opinion found star wide receiver Julio Jones’ foot injury will cause him to miss the remainder of the season.

Coach Mike Smith said Jones will have surgery on Monday, but the Falcons still did not release details of the injury.

Smith had said Tuesday the first reports were not encouraging. Jones wanted a second opinion and was examined Wednesday in Charlotte, N.C., by foot specialist Dr. Robert Anderson.

“Unfortunately, Julio’s appointment with the doctor today confirmed our initial findings,” Smith said in a statement released by the team.

Anderson repaired a broken bone in Jones’ right foot before his 2011 rookie season.

The loss of Jones is a devastating blow to the Falcons, who are 1-4 and entering their bye week. Roddy White, a four-time Pro Bowl receiver, hurt his hamstring in the loss to the Jets and missed Wednesday’s practice.

Smith said White, who already was slowed by an ankle sprain, also will miss Thursday’s practice.

“Injuries are a part of the NFL and you’ve got to deal with them,” Smith said. “Everybody has to deal with them. Our guys understand it’s an opportunity for somebody else to step up. We’ve done it many times already this season. It’s not going to be any different than any other week.”

Jones leads the NFL with 41 catches and ranks second with 580 yards receiving. He made his first Pro Bowl team in 2012 when he had 79 receptions for 1,198 yards and 10 touchdowns.

Jones (6-3, 220) provides size mismatches for most cornerbacks and is the Falcons’ top deep threat. He had eight catches for 99 yards, including a 46-yarder, against the Jets.

“It’s tough to replicate what he can do,” said quarterback Matt Ryan. “Certainly he’s one of the most gifted receivers in the NFL. That makes it difficult to replace that but we have other guys who need to step up and I think will step up for us.”

Ryan said he saw Jones on Wednesday before the receiver left the practice facility for appointment in Charlotte.

“We’ve all kind of been there before,” Ryan said. “It’s part of playing in this league. It’s a tough, physical game. He’s got a great mindset about it though. He’s positive, he’s upbeat.”

The Falcons could seek help at wide receiver during the bye week. Jones’ big-play ability will be difficult to replace.

“It’s going to take some time to figure out what we’re going to do, depending on how long he’s out or whatever,” Ryan said. “But we’ll figure it out and try to find a way to get it done and be explosive in some different ways.”

Douglas, who has 16 catches for 219 yards, is in his fifth season. Most of his experience has come as the No. 3 receiver, and he could be asked to join tight end Tony Gonzalez in a lead role when the Falcons return from the bye week to play Tampa Bay on Oct. 20.

“I’ve been playing football for a long time,” Douglas said. “I don’t need to go out there and try to be Superman. I’ve just got to play the game of football.”

Cone had his first career catch on Monday night. Davis had four catches in 2012 and none this season.

While his teammates made optimistic predictions about the backup receivers, Cone stated the obvious.

Ghana and Egypt Set for Play-Off First Leg in Kumasi