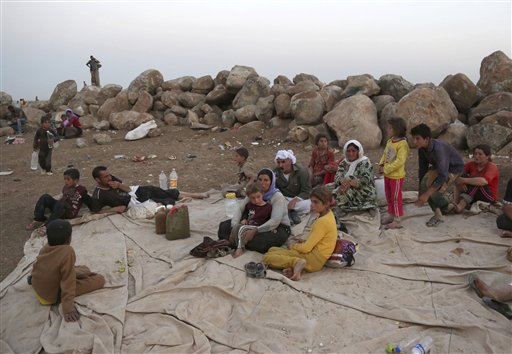 Displaced Iraqis from the Yazidi community settle at a camp in Derike, Syria, Sunday, Aug. 10, 2014. Kurdish authorities at the border believe some 45,000 Yazidis passed the river crossing in the past week and thousands more are still stranded in the mountains. (AP Photo/ Khalid Mohammed)

FISHKHABOUR, Iraq (The Washington Post) — Burned by the sun, blistered with thirst and weak from exhaustion, thousands of Yazidis on Sunday fled the mountain on which they had been trapped for a week, streaming into Iraq’s northern Kurdistan region after a harrowing escape from extremist fighters that some said was aided by U.S. airstrikes.

Hungry, thirsty and tired, they limped across a narrow bridge spanning the Tigris on the Iraqi-Syrian border hauling their few belongings, some of them barefoot, others in sleeping clothes because they ran for their lives at night.

It was the last leg of a nightmarish journey that some have not survived — and many more may not.

Thousands are still stranded on the mountain, either because they are surrounded in their villages by militants with the Islamic State or are simply too weak to walk, according to those arriving in the remote Iraqi border post of Fishkhabour. Others have died trying to reach safety, falling by the wayside on the barren, rocky mountain for lack of food and water.

“We passed dead people on the way,” said Barakat Ghanem Hassan, 75, who walked for two days with his wife and their 3-year-old grandson, Ayman.
READ MORE