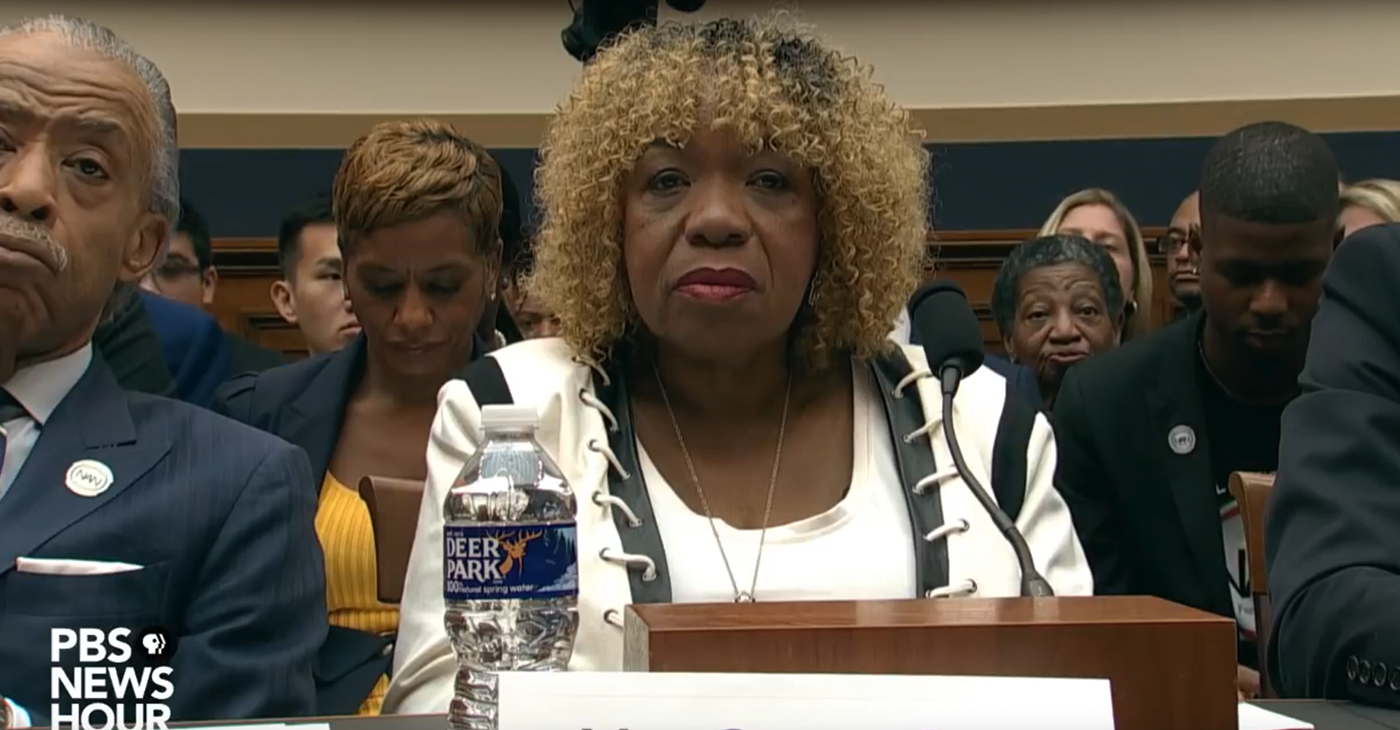 The mother of Eric Garner, the man who was killed after being put in a chokehold by police in 2014 in New York City, testified before the House Judiciary Committee on Sep. 19, 2019. “Violent police have no place in this society,” said Gwen Carr, Garner’s mother, who urged lawmakers to pass a bill that would prevent police from using chokeholds. The Rev. Al Sharpton and other civil rights and community advocates appeared before the committee. (Photo: PBS News Hour / YouTube)

Carr, the mother of Eric Garner who died in New York from a police chokehold in 2014, recounted how police officers had approached her son outside of a grocery store on Staten Island.

Inexplicably, Officer Daniel Pantaleo wrestled Garner to the ground and used an illegal chokehold that eventually led to Garner’s death.

“Five years ago, my beloved son Eric was murdered by people who were supposed to serve and protect,” Carr told the bipartisan group of lawmakers.

“Eric cried out 11 times, ‘I can’t breathe.’ But those officers on the scene that day didn’t seem to care,” she said. “How come no one was held accountable?”

It also led to the fatal heart attack suffered by Garner’s sister, Erica, who died of a heart attack in 2017, Carr said.

“She died of a broken heart,” Carr said.

“Shockingly, the officer responsible for placing Mr. Garner in a departmentally-banned chokehold remained on the force for five years before finally being fired this past August,” Nadler said.

The chairman also asked that his colleagues in Congress look for measures that would prevent police officers from escaping punishment.

“There needs to be better information on the use of force and better proposals to end racial profiling and to restore trust between law enforcement and the community,” Nadler said.

The hearing focused on the role of the federal government in addressing concerns about illegal practices, enhancing accountability, and in developing 21st-century policing practices.

During the session, the Rev. Al Sharpton joined Carr and others to call on Congress to pass legislation to set a federal standard for excessive use of force.

“I should say from the onset that (the National Action Network – or NAN) has never been anti-police. We are, however, anti-police brutality,” Sharpton said.

“We know that most police officers are hardworking and law-abiding citizens who take the oath to serve and protect quite seriously. They put their lives on the line every day to keep us all safe, and we are grateful for their enormous service and sacrifice,” he said.

However, over the past two decades, there has been a growing, and disturbing trend of mostly unarmed black and brown young men who have been the victims of discriminatory police practices and these encounters with law enforcement have led to their untimely deaths, Sharpton told the committee.

These statistics should cause all great alarm, he said.

“There are too many victims to name. But we all know their stories. We’ve read about them in the newspaper and have seen them on the nightly news: Eric Garner, Michael Brown, LaQuan McDonald, Tamir Rice, Walter Scott, Freddie Gray, Stephon Clark, and countless others,” Sharpton said.

“I’ve spent days and nights with grieving parents and family members who wanted nothing more but justice for their loved one who was senselessly shot or choked to death by an officer. I’ve preached the funerals. You can feel the pain and heartache. And even in the despair, I made a promise to the victims’ families that I would push Congress to enact federal legislation to address fatal misconduct,” he said.

Sharpton added that the time to address the issue is now.

He said there’s a deep-seated mistrust of the police in many communities of color and solutions must be identified to find ways to rebuild trust.

“Quite simply, there is a need for greater oversight on the patterns and practices of law enforcement across the country,” Sharpton said.

“Without these checks and balances, we will continue to experience discrimination and egregious injustices at every stage of the criminal justice system, beginning with an individual’s first encounter with law enforcement officials, as we witnessed first-hand in New York with the death of Eric Garner five years ago,” he said.

“There is a need for police officers to undergo racial profiling and micro-aggression training so that they are better equipped to police in an increasingly diverse America.”