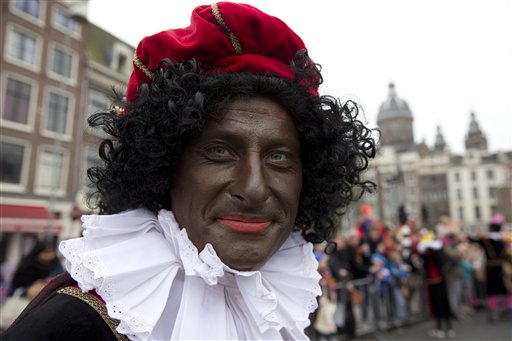 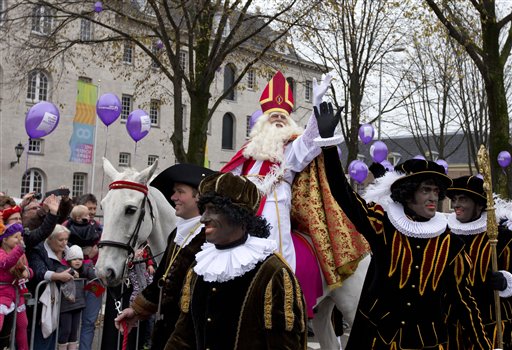 In this Nov. 17, 2013 file photo people line the road to watch the arrival of Sinterklaas, the Dutch version of Santa Claus, center, and his blackface sidekick “Zwarte Piet”, or Black Pete, in Amsterdam. On Thursday, July 3, 2014, an Amsterdam court has stated the figure known as Black Pete is a negative stereotype and the city must rethink its involvement in holiday celebrations involving the figure. Debate over the figure of Black Pete has intensified in the Netherlands in recent years as opponents argue it is a racist caricature, while supporters say it is a harmless figure of fun. (AP Photo/Peter Dejong, File)

AMSTERDAM (AP) — An Amsterdam court ruled Thursday that the traditional figure known as Black Pete — the sidekick to the Dutch equivalent of Santa Claus — is a negative stereotype of black people and the city must rethink its involvement in holiday celebrations involving him.

Debate over Zwarte Piet has raged in the Netherlands in recent years.

Black Pete is usually portrayed by white people in blackface makeup, with thick red lips and a frizzy Afro hairstyle. Opponents say that’s a racist caricature. Most Dutch people — around 80 percent of whom are white — are fiercely loyal to their holiday tradition, saying he is a harmless fantasy figure and no insult is intended.

The court said Thursday that Black Pete’s appearance, in combination with the fact that he is often portrayed as dumb and servile, makes it “a negative stereotype of black people.”

It also cited a publication by the country’s national human rights commission this week that found that white Dutch leaders frequently react with “irritation and dismissal” when questions of racism are raised, even though workplace discrimination is well documented in the Netherlands.

The Amsterdam District Court ordered the city to re-examine its decision to grant a permit for one part of the annual winter festival attended by thousands of children: the arrival of St. Nicholas, or “Sinterklaas.”

Adults dress up to play the Dutch version of the story, with St. Nicholas arriving by steamboat from Spain in November, accompanied by a flotilla of boats packed with Black Petes.

The kindly St. Nicholas rides a white horse accompanied by the clowning Petes, who hand out cookies. Festivities conclude later with a night of gift giving on Dec. 5.

Amsterdam has begun discussing possible solutions, including using different colors of face paint for Pete, or merely smudging his cheeks with soot.

Clashes Break Out During Palestinian Funeral

Sarkozy Fights Back in Face of Corruption Charges