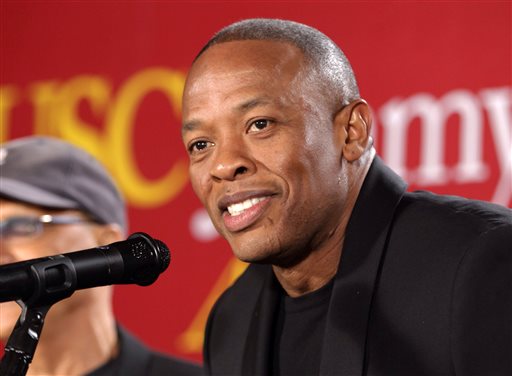 This May 15, 2013 file photo shows hip-hop mogul Dr. Dre as he announces a $70 million dollar donation to create the new “Jimmy Iovine and Andre Young Academy for Arts and Technology and Business Innovation,” at the University of Southern California, in Santa Monica, Calif. (AP Photo/Damian Dovarganes)

NEW YORK (AP) — Dr. Dre says he will donate royalties from his new album to the city of Compton for a new performing arts facility.

In an interview with Zane Lowe on Beats 1 Radio, Dre said he spoke to Compton Mayor Aja Brown about ways to give back to the city with the release of his first album in 16 years.

The rapper said Thursday he “decided to donate all of my artist royalties from the sale of this album to help fund a new performing arts and entertainment facility for the kids in Compton.”

“Compton: A Soundtrack by Dr. Dre,” inspired by the N.W.A. biopic “Straight Outta Compton” which opens Aug. 14, will be released Friday. Dre said he hopes “everybody appreciates all the hard work I put into this album.”

As TV Tries to Get More Diverse, Black History Returns to the Spotlight