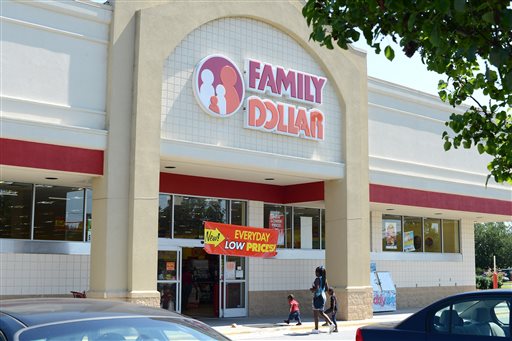 NEW YORK (AP) — The nation’s top dollar store chains are betting big that their once-thriving business will make a comeback if they band together.

Dollar General, the nation’s largest dollar-store chain, started a bidding war on Monday when it offered approximately $8.95 billion for rival Family Dollar. It was an attempt to trump Dollar Tree, which agreed to acquire Family Dollar for $8.5 billion last month.

The bidding war comes as the chains look for ways to grow sales and market share at a time when their core low-income customers remain financially stretched during the economic recovery. The companies have hit a particularly rough patch after years of expanding rapidly during the recession when people shopped more at dollar stores to save money. Now, the companies are hoping they’ll be more profitable and efficient if they consolidate.

Ken Perkins, president of RetailMetrics LLC, a retail research firm, said any merger will wind up being good for customers. At a time when shoppers are “extremely deal oriented,” a merger will enable the companies to use their scale to lower the overall costs of purchasing goods, which will help bring prices lower.

“It feels like a race to the bottom with some of the pricing,” he said.

For Dollar General, the decision to enter the fray was clear because Family Dollar had been on its radar for a while. Dollar General Chairman and CEO Rick Dreiling said during a conference call Monday that the company had expressed interest in combining with Family Dollar multiple times over the last few years.

While Dreiling didn’t disclose if there’d been any sticking points in working out an agreement in the past, he said Dollar General was very surprised when Family Dollar announced its deal with Dollar Tree. Despite the shock, Dollar General remains undeterred in trying to work out a transaction.

“It’s all water under the bridge. We’re ready to move forward,” Dreiling said.

While Dreiling was planning to retire from the CEO post in May 2015, he’s agreed to postpone his retirement until May 2016 in order to help with the integration of the two companies.

“Maybe we’ll be able to learn something from each other,” he said.

The two businesses also have similar pricing strategies, offering shoppers most products at $10 or less. At Dollar Tree, everything in its stores costs just a buck.

While Dollar General and Family Dollar have several complimentary aspects of their businesses, a combination would also help eliminate some competition in the sector.

Dreiling said that even though retailers like Wal-Mart Stores Inc. have been stepping up the pace to open smaller-format stores to try to lure lower-income customers, Dollar General’s business has actually been hurt worse when a Family Dollar store opens near one of its locations.

But that doesn’t mean that Wal-Mart and other retailers like Kroger Co. aren’t a competitive threat still. By bringing Family Dollar into the fold, Dollar General can not only eliminate the rivalry — it can also bolster its muscle to help ward offer bigger players.

A Dollar General and Family Dollar combination would create a chain with almost 20,000 stores in 46 states and sales of more than $28 billion.

Family Dollar has also come into play because of its business struggles. The Charlotte, North Carolina company has been shuttering stores and cutting prices in hopes of boosting its financial performance. In June investor Carl Icahn urged the company to put itself up for sale.

It remains to be seen if Dollar Tree will boost its offer for Family Dollar, and Wal-Mart recently said it’s not interested in acquiring a dollar chain. Dreiling would not comment on whether Dollar General would be willing to increase its bid.

“We have a great deal on the table. Let’s let it all play out,” he said.

Representatives for Dollar Tree did not immediately respond to requests for comment. Family Dollar said its board would review the proposal.

If Dollar General winds up reaching an agreement with Family Dollar, the Goodlettsville, Tennessee company anticipates annual savings of $550 million to $600 million three years after closing. Integration costs are projected to total between $300 million and $400 million.

Dollar General believes it can quickly address any antitrust issues and is willing to divest up to 700 of its stores in order to get the necessary approvals for the transaction. Dollar Tree had agreed to divest 500 of its U.S. stores for its proposed deal.

Dreiling has also agreed to remain as a director — and would be willing to serve as chairman — if asked by the board and elected by shareholders. Todd Vasos, Dollar General’s chief operating officer, will be responsible for handling the day-to-day integration of the two companies.

Dollar General said that Goldman Sachs and Citigroup Global Markets Inc. have agreed to provide committed financing, which would include the $305 million termination fee due to Dollar Tree if Family Dollar chooses a deal with Dollar General instead.

Dollar General’s board unanimously approved the Family Dollar deal. The company anticipates completing the transaction on a similar time frame as the one Dollar Tree announced, which was by early 2015.