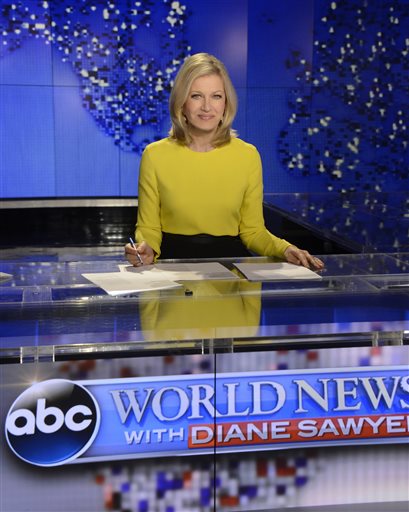 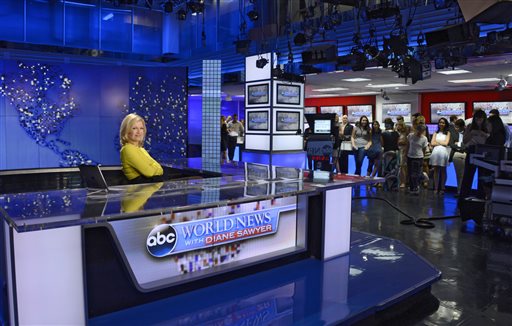 In this Wed., Aug. 27, 2014 photo provided by ABC, the staff gathers at ABC News headquarters for Diane Sawyer, left, who signed off on her last broadcast as anchor of “World News,” in New York. Sawyer told viewers that it has been wonderful to be the “home port” of the network’s news team each weeknight. She will be replaced next week by David Muir. (AP Photo/ABC, Ida Mae Astute)

NEW YORK (AP) — Diane Sawyer signed off as anchor of ABC’s “World News” on Wednesday, telling viewers that it has been wonderful to be the “home port” of the network’s news team each weeknight.

She will be replaced next week by David Muir. The 68-year-old Sawyer, one of television news’ best-known personalities, has anchored ABC’s flagship newscast since December 2009.

While it’s been known for months that this was Sawyer’s last week as anchor, it wasn’t until she tweeted earlier Wednesday that it became clear she wasn’t anchoring on Thursday and Friday. On Wednesday’s newscast, she chatted briefly on the set with Muir and took viewers on a behind-the-scenes tour pointing out people who worked at “World News.”

“It has been wonderful to be the home port for the brave and brilliant forces of ABC News around the world and to feel every single night that you and I were in a conversation about the day together,” she said.

Even when the night’s news is bad, Sawyer said she felt she shared a conviction with viewers that things will get better.

She said of Muir, “he is my friend and you are in strong and steady hands.”

Sawyer isn’t retiring. She said Wednesday that she will move “down the hall and up the stairs” to a reporting job. She will be expected to compete for big newsmaking interviews at the network, with more room to maneuver now that Barbara Walters isn’t working regularly anymore.

“World News” has been a steady No. 2 in the ratings to NBC’s “Nightly News,” anchored by Brian Williams, for most of Sawyer’s tenure, although in recent months it has made inroads among some younger viewers. CBS, with Scott Pelley as anchor, is the third-place network.