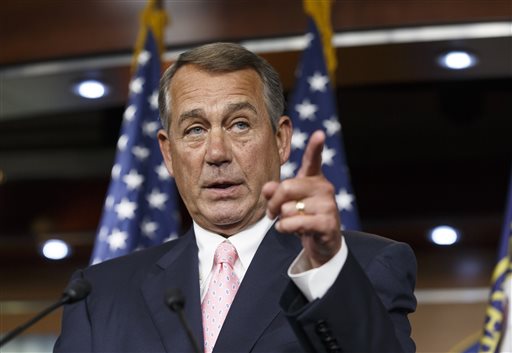 In this July 24, 2014, file photo, House Speaker John Boehner, R-Ohio, talks with the media on Capitol Hill in Washington. While much of the rest of the world watches the Gaza war in horror and scrambles for a cease-fire, U.S. lawmakers are pressing the Obama administration to take no action that puts pressure on Israel to halt its military operations. Boehner said Monday, July 28, the administration should “stand with Israel, not just as a broker or observer but as a strong partner.” (AP Photo/File)

In fundraising requests, media appearances and conference calls, Democrats are painting Republicans as the “shutdown party” just in time for the midterm elections that coincidentally hit right after the one-year anniversary of last year’s October shutdown.

Democrats hope this emerging strategy persuades voters that if Republicans win both the House and Senate in November, there will be more unpopular shutdowns and Obama will have to fight hard against the GOP to simply preserve the policy legacy of his first six years in office.

The Democratic argument is based on history — the narrative, which Republicans deny, that they intend to impeach Obama and that’s why they sued him over his executive actions on Obamacare. More recently, Democrats contend Republican opposition to imminent unilateral action by the president on immigration could lead to a shutdown of the government.