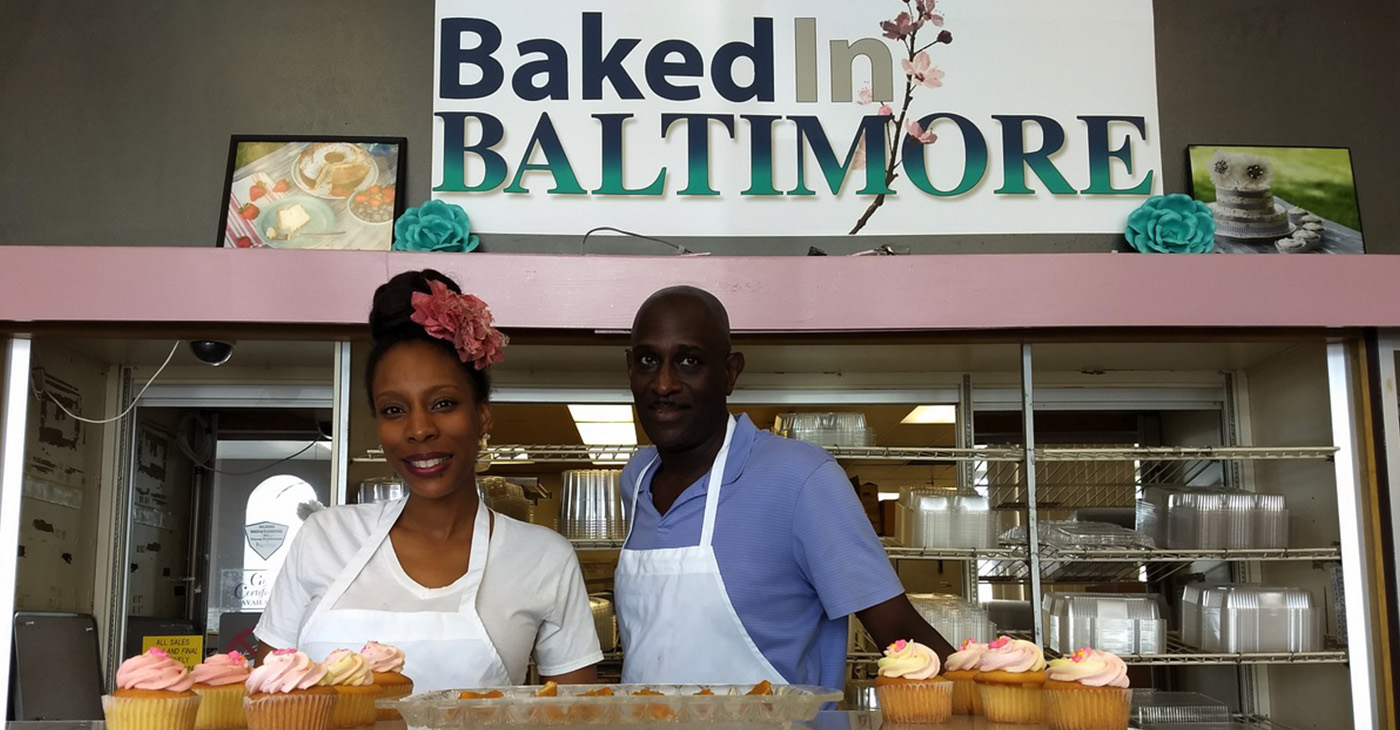 By J. K. Schmid, Special to the AFRO

“I want to be impactful in the food space, what does that look like,” April Richardson mused inside the kitchen of her new business: Baked in Baltimore.

September 15 was the last of Baked in Baltimore’s four soft openings in Pikesville. The grand opening, September 22, is one week away.

The wall art is up displaying contrasting photos of the ‘68 and ‘15 Baltimore riots. The individual pieces of a glass chandelier are laid out on a mat and twinkling in the sun.

April Richardson and Derek Lowery are the co-founders of Baked in Pikesville, Maryland. (Photo by J. K. Schmid)

Richardson took the AFRO on a walking tour of the bakery’s two floors. The orthopedic boot on her right foot, helping heal a broken toe, doesn’t break her stride.

The D.C. lawyer, president and owner of DC Sweet Potato Cake and managing member of Food Opportunity, was born and raised in Baltimore City, and is a graduate of City College.

“I’m an everything kind of girl. I’m not linear in that way. I never had this passion for one thing. I had a purpose for many things, and getting things done,” Richardson said. ”And because the law touched everything, I figured I’d get a law degree because no matter what industry I wanted to go into, a law degree would be helpful, because law school teaches you how to think critically and how to find information. Once you have that base, you can do anything.”

“Anything” goes from a mortgage fraud prosecutor with Prince George’s County State’s Attorney’s office, to a financial crimes attorney with the FDIC, to a “micro” small business consultant.

“I’ve represented, with a law degree, designers during Fashion Week, I’ve done work for financial institutions, for the food industry, for start-ups, I’ve run political campaigns,” Richardson said. “The only thing that the law degree didn’t teach me, or help me do better, was be a parent. No amount of critical thinking prepared me for that piece.”

While moving forward, Richardson says she’s keeping in mind what the old bakery was, and will continue with kosher offerings. She also asked residents for their input.

“The cool thing about taking over this company is that it’s stretching us into different baked goods, because we’re a sweet potato baked goods, a southern kind of cake company, where we’ll do pineapple upside down or coconut cakes, or lemon pounds… “ Richardson said. “[Goldman] did donuts, they did cookies, now we do them as part of us moving into Baltimore City.”

“We’re painting and getting ready, this is our work space, once it’s all done, it’ll be transformed.” Richardson said. “Our goal is to become an SQF (Safe Quality Food) facility, which is the highest level of food certification that you can get. There are very few minorities that hold that food level. That gets you into any retailer.”

SQF certification gets products onto the shelves of retailers like Starbucks and Kroger. Baked in Baltimore already sells at Safeway, and DC Sweet Potato Cake products are on sale in surrounding D.C. Wegman’s, Nordstrom’s and Starbucks.

Even further down the line, Richardson plans to start roasting coffee on the premises and targeting Baltimore’s returned citizen population for job training opportunities.

But first there will be the grand opening. In addition to the lenders that helped finance the new business venture, Baltimore Mayor Catherine E. Pugh is slated to attend and perform Baked in Baltimore’s ribbon cutting.

The ribbon cutting ceremony will be from 12 p.m. to 2 p.m September 22 with a cupcake giveaway also taking place.

Baked in Baltimore is located at 6848 Reisterstown Road.

The Search for Solutions to School-to-Prison Pipeline