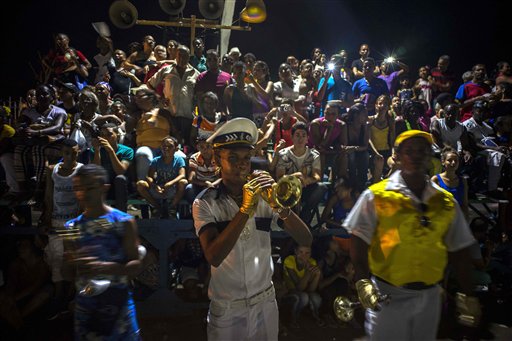 In this July 25, 2015 photo, a reveler plays the trumpet at the start of a carnival parade in Santiago, Cuba. Along with the new oceanfront Malecon and the restoration of homes in the citys historic center, the Cuban government has built a new theater and an artisanal brewpub as part of a broader reconstruction and improvement effort that began after Hurricane Sandy devastated the city in 2012. (AP Photo/Ramon Espinosa)

Missing are the tourists. As foreign visitors flood Havana and a select group of other colonial cities and beach resorts, Cuba’s second-largest city is suffering a tourist drought.

Santiago saw less than a tenth of the tourist traffic in Havana last year and less than a 20th of the visitors to the beach resort of Varadero even amid large-scale government investment in renovating the city for its 500th anniversary this summer. Other Cuban c are seeing similarly stagnant visitor numbers despite the dramatic surge in overall tourism set off by the announcement of detente between the U.S. and Cuba.

That’s raising concerns that a rising tide of tourist dollars will leave some areas of Cuba booming and others struggling against a backdrop of broader economic stagnation.

“They’re promoting Havana and the center of the country but they’ve forgotten about Santiago,” said Gladys Domenech, who rents tourists a room in her home in the historic center that features a terrace with a sweeping view of the Caribbean.

The city sits about 500 miles (800 kilometers) east of Havana on highways that narrow outside the capital to horrifically rutted roads clogged with horse carts, bicyclists and stray cows. The journey by road can last 15 hours, and far longer in Cuba’s notoriously unreliable and uncomfortable inter-city buses. Train and domestic plane tickets are virtually impossible to obtain without waiting hours in lines that may or may not end in satisfaction. There are only three flights a week from the U.S.

“It’s tough for those who go to Havana and want to come here,” said Virgen Maria Jerez, owner of an elegant private restaurant near Domenech’s home in central Santiago. “Transport is vital and we’re disconnected.”

Those who do reach Santiago find a city rich with history but hampered by what visitors and residents alike call substandard accommodations, few high-quality restaurants and a lack of fun things to do at night. Cuban officials say Santiago has roughly 1,500 of Cuba’s 60,000 hotel rooms, far fewer than it needs.

Santiago’s promoters lament that tourists are missing out on the city’s rich Afro-Cuban culture, its meandering streets, colonial architecture and its prized role as the home of Cuban musical genres such as trova and son.

What’s more, it has a unique underwater park with seven ships sunk during the Spanish-American War, accessible by small boat or a scuba dive.

“It’s a treasure that we have to show off,” said Vicente Gonzalez, head of Santiago’s Center for Cultural and Natural Underwater Heritage.

Along with the new oceanfront malecon and the restoration of homes in the city’s historic center, the Cuban government has built a new theater and an artisanal brewpub as part of a broader reconstruction and improvement effort that began after Hurricane Sandy devastated the city in 2012.

Another potential draw, particularly for American tourists, is the memorial to Theodore Roosevelt’s Rough Riders, who fought on the city’s San Juan Hill in one of the most famous battles of the Spanish-American War that freed Cuba from Spanish rule.

But virtually every tourist establishment in the city closes at 10 p.m., leaving the streets dark and silent.

Last year, Santiago had 297,918 visitor-days, an industry measure of the number of tourists who arrived in the city multiplied by the number of days each stayed. That was a 6 percent rise over 2013, but the overall number remains tiny compared to flow of tourists in Havana, which had nearly 3 million visitor days, or Varadero with 7.8 million, according to Jose Luis Perello, a professor of tourism at the University of Havana.

Some advocates of U.S. travel to Cuba says they are optimistic about Santiago’s future, particularly since American tourists remain barred from pure tourism and must participate mostly in cultural or educational activities well-suited to historic sites like Santiago.

“The city and the region have much to offer. It’s just a question of time before tourism in Santiago starts growing,” said Tom Popper, head of insightCuba, one of the largest operators of U.S. tours to Cuba.

“U.S. tourists can go to any part of the Caribbean for the beaches, but what they want to see is the Cuba that they haven’t been able to see for generations.”