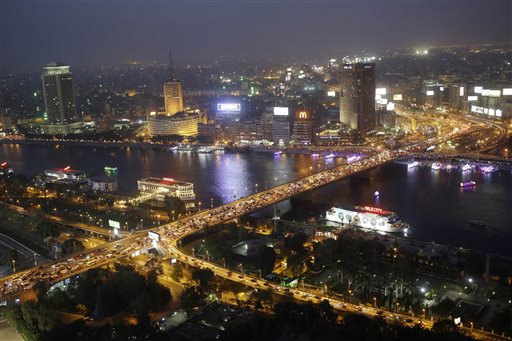 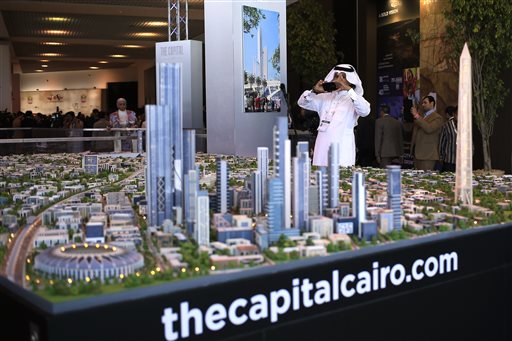 In this Saturday, March 14, 2015 file photo, a model of a planned new capital for Egypt is on display at an economic conference in Sharm el-Sheikh, Egypt. President Abdel-Fattah el-Sissi’s other major project trumpeted in March, aside from an extension of the Suez Canal, was the construction of a massive new capital city the size of Singapore, but that turned out to be little more than an opaque announcement. (AP Photo/Hassan Ammar, File)

CAIRO (AP) — In a few short years, if everything goes according to plan, Egypt will have new megaprojects, special investment zones and power plants fueled by the largest offshore gas field in the Mediterranean. But in the more immediate future, experts say the government needs to boost investment and bring in foreign capital to avoid a looming cash crunch.

Billions of dollars in debt repayments are coming due, foreign currency reserves fell to a six-month low in August, and Finance Minister Hany Kadry Dimian said this week that foreign direct investment is not growing as fast as hoped. Experts say if the government doesn’t act quickly, the investment needed to realize its ambitious plans may not materialize in time.

Letting the currency devalue against the dollar would make exports more competitive, shore up foreign reserves and alleviate investors’ uncertainty over what their Egyptian-pound assets will be worth. Implementing a planned value-added tax this month would help bring the budget into line, as would a fresh bond issue like one last June that raised $1.5 billion.

“Managing the short term for the country will be critical … the next two to three years,” said Hazem Badran, deputy chief executive of CI Capital Group, at a Euromoney business conference held this week. “You’re facing a lot of cash shortages in the short term,” he said, adding that “foreign investors aren’t going to come back without the exchange rate issue being resolved.”

Less than a fifth of the Cairo conference’s participants were foreigners, although many delegates expressed hope for the future after years of turmoil that took a heavy toll on North Africa’s biggest economy.

Egypt has been making a gradual recovery from the tumult that followed the overthrow of longtime autocrat Hosni Mubark in a 2011 uprising. President Abdel-Fattah el-Sissi, a former general who led the army’s overthrow of the Islamist Mohammed Morsi in 2013, has staked his legitimacy on stabilizing the country and reviving the economy.

But militants in the Sinai have escalated a long-running insurgency in the two years since Morsi was overthrown, and a series of recent bombings in Cairo, mainly targeting security services, has rattled nerves. A Sinai-based Islamic State affiliate set off a car bomb outside the Italian Consulate in July and later captured and beheaded a Croatian oil surveyor.

The government has forecast 5 percent growth this year if investment targets are met, approaching the 7 percent Egypt averaged in the years leading up to the 2011 uprising. But even at its peak, the growth failed to generate enough jobs to meet the surging needs of the country’s overwhelmingly young population.

A much-hyped economic conference in March drew promises of billions of dollars in investment, as well as additional aid from el-Sissi’s Gulf backers like Saudi Arabia and the United Arab Emirates, who have propped up the economy with tens of billions of dollars since Morsi’s overthrow. But the Gulf aid is expected to wane, and most of the non-binding agreements signed at the conference have yet to result in major inflows of capital.

Germany’s Siemens announced its single biggest order ever at the conference, worth $8 billion, to build power plants. And late last month Italy’s ENI announced the discovery of a “supergiant” offshore gas field that could eliminate long-running energy shortfalls and possibly allow Egypt to export when it comes online in around five years.

The government is hoping for a total of $10 billion in investment in the 2015-16 fiscal year. The latest central bank figures do not cover the post-conference period but show improvement, with $5.7 billion in the three quarters ending in March, compared to just $4.1 billion the entire previous fiscal year.

The centerpiece of el-Sissi’s efforts to jump-start the economy was an extension of the Suez Canal unveiled in March and completed in August. But claims that annual revenues from the crucial waterway will be more than doubled to $13.2 billion by 2023 depend on a surge in global trade, which most experts think is unlikely.

The other major project trumpeted in March was the construction of a massive new capital city the size of Singapore, but that turned out to be little more than an opaque announcement. Plans are far from being finalized, and investment has yet to come in, although officials say they are still in discussions with China and the UAE.

The next phase of the canal project — ambitious plans to develop a special trade zone, industrial hub and logistics center — has yet to get off the ground. Observers say it will need $30-35 billion in investment over the next 15 years, and some $10 billion for initial infrastructure development from the private sector, but little has been pledged so far and incentives have yet to be revealed.

“What will the private sector bring there? It depends on the investment opportunities and incentives,” Yehia Zaki, of project consultants and planners Dar al-Handasah, told the Euromoney conference.

Egypt has had no parliament since 2012, leaving el-Sissi to rule by decree. Parliamentary elections are planned for later this year, but in the meantime there has been little transparency in policy-making — another concern for investors.

“They really need to resolve this foreign exchange issue,” said Mohamed Abu Basha, an Egyptian economist at regional investment giant EFG Hermes. “All these big decisions were needed yesterday, in reality, but it’s all a guessing game, there’s limited visibility about it.”