Court to Weigh Use of Race in Drawing Political Lines
Advertisement 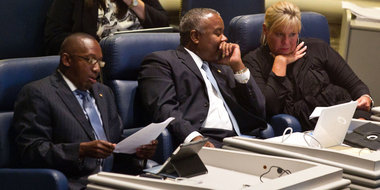 WASHINGTON (USA Today) — Democrat Quinton Ross has represented a pretty safe district in the Alabama state Senate since 2002, when 72% of its voting-age population was black. In his last two elections, he ran unopposed.

When it came time to redraw the state’s political lines in 2012, however, Republicans who had won control of the state Legislature made it even safer for Ross, an African American. To replace voters who had moved away, they added 14,806 blacks and 36 whites to District 26, resulting in a 75% black majority.

The Legislature’s artistry had the intended effect throughout the state, racially and politically. It solidified the ability of black voters to elect their favored candidates, as mandated by the Voting Rights Act of 1965. And it made adjacent suburban and rural districts even more white – and more friendly to Republicans.

“The district was already at a point where you had quite a few blacks,” Ross says. “Sometimes, you can just go overboard.”