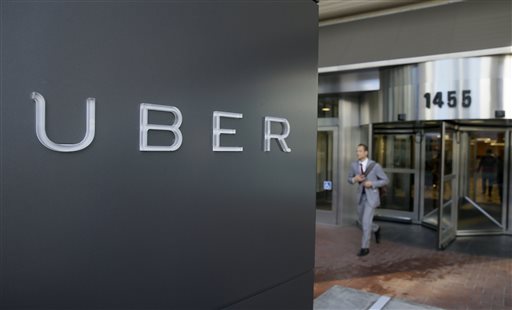 In this photo taken Tuesday, Dec. 16, 2014, a man leaves the headquarters of Uber in San Francisco. A federal judge granted class-action status Tuesday, Sept. 1, 2015, to a lawsuit in California against Uber over the payment of its drivers, upping the stakes for the ride-hailing company in the case. (AP Photo/Eric Risberg, File)

SAN FRANCISCO (AP) — A federal judge granted class-action status to a lawsuit in California against Uber over the payment of its drivers, upping the stakes for the ride-hailing company in the case.

Tuesday’s ruling increases the number of potential California plaintiffs in the suit that claims Uber drivers are incorrectly classified as independent contractors when they are actually employees.

“Today’s ruling sets the stage for a trial and a legal battle that will have dramatic implications for Uber’s business model as well as more generally how independent contractors are viewed under California law,” said Lonnie Giamela, a labor lawyer in Los Angeles who has been following the case.

U.S. District Court Judge Edward Chen in San Francisco made his decision in the lawsuit filed by several current or former Uber drivers. The plaintiffs named in the suit say they are Uber employees and have been shortchanged on expenses and tips.

Their lawsuit sought class certification on behalf of 160,000 drivers who have worked for the company in California since 2009. Chen certified the class, though he excluded some drivers and limited it to the drivers’ claims for tips, not expenses.

Chen estimated the number of drivers in the suit could at least be in the hundreds, meaning the company could be on the hook for more in damages if it loses the case.

Uber said in a statement it would likely appeal Chen’s ruling but was pleased that he had certified “only a tiny fraction of the class that the plaintiffs were seeking.” The company said it believes few current drivers would qualify for the class.

“We are pleased the district court rejected the ‘mega-class’ plaintiffs asked it to endorse, but decisions from the Supreme Court, Ninth Circuit and other courts have made it clear that no class whatsoever can be certified here,” said Ted Boutrous, an attorney who represents the company.

Classifying its workers as employees could raise Uber’s operating expenses significantly and would go against its business model and identity. Uber’s selling points for attracting drivers are based on ideas of freedom and autonomy.

Chen said the company had shown little evidence for that claim.

The drivers, meanwhile, have numerous things in common, including that Uber sets their pay, can fire them, uses rider-feedback to evaluate them and does not control their schedules or where they work, Chen said.

Ad of the Day: A Young Serena Williams Sees the Future in This Excellent Gatorade Spot

17 Clever Ways to Save More for Retirement