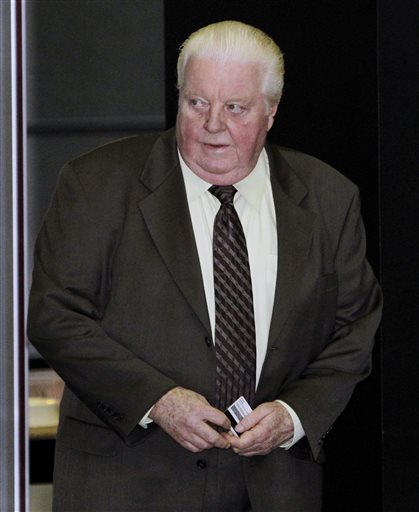 In this June 8, 2010 file photo, former Chicago Police Lt. Jon Burge arrives at the federal building for his obstruction of justice and perjury trial in Chicago. Burge was convicted in 2010 and is now imprisoned of lying about the torture of suspects decades ago. On Thursday, July 3, 2014, the Illinois Supreme Court ruled that Attorney General Lisa Madigan can’t challenge a police pension board vote preserving pension payments to the former Chicago police commander. (AP Photo/Charles Rex Arbogast, File)

CHICAGO (AP) — An imprisoned former Chicago police commander accused of overseeing the torture of dozens of men — almost all of them black — to coerce confessions will keep his pension of more than $3,000 a month, under a decision Thursday by the Illinois Supreme Court.

The justices ruled 4-3 that Illinois Attorney General Lisa Madigan cannot challenge a police pension board vote preserving the payments to former police lieutenant Jon Burge. The court said allowing the challenge would be a “fundamental change” to the state’s pension process.

Madigan lashed out at the ruling, saying she was “extremely disappointed” in the decision to “allow a torturer and convicted felon to receive his taxpayer-funded pension.”

Mayor Rahm Emanuel agreed, saying in a statement that to “see the taxpayer dollars flow to a felon whose perjury conviction was directly related to the abuse of his city police position is offensive to every Chicago resident.”

Madigan’s office later said it was trying to determine whether there were any further legal arguments it could make. But those likely would have to be made in state court, Madigan’s spokeswoman Maura Possley said, because there are no issues of federal or constitutional law.

Burge, perhaps the Chicago police force’s most infamous officer, is serving a 4½ year sentence in federal prison after being convicted of perjury in connection with testimony he gave in a civil case involving torture allegations.

More than 100 men have accused Burge and the officers under his command of shocking, suffocating and beating them into giving false confessions during the 1970s and 1980s. The decorated former commander, now 66, has never been criminally charged with abuse.

The scandal has dogged the city for decades — in large part because of multimillion dollar settlements that the City Council has approved, each one accompanied by angry comments by aldermen about the fact that the city is forced to pay Burge’s pension.

All told, the scandal has cost the city more than $100 million. Much of that money has gone to settle lawsuits of men who spent decades in prison after confessing to crimes they did not commit. But because the Burge and his men were city employees, the city has had to pay for their legal representation and added to that, the city has paid millions of dollars more in pensions to Burge and the other officers who have been implicated and must continue to do so the rest of their lives.

“It’s very disturbing,” said Flint Taylor, who has represented more than a dozen men who alleged they were tortured by Burge’s squad. “There’s something terribly wrong with … Burge and all his confederates continuing to collect their pensions.”

Burge has been receiving his pension since about four years after he was fired from the police department in 1993 over the mistreatment of a suspect. David Kugler, an attorney for the police pension board, said Burge’s original pension of more than $3,000 has certainly gone up because of cost-of-living increases, but he did not know the exact amount Burge receives today.

But after he his 2010 conviction in federal court, the police pension board held a hearing to decide whether Burge should be allowed to keep collecting his pension. In January 2011, a motion was made to terminate his pension, but it failed on a 4-4 vote because five votes were needed to pass it.

Madigan then filed the lawsuit, saying the pension board shouldn’t have let Burge keep his pension given his conviction. Burge’s supporters say the conviction involved testimony he gave after he retired, not while he was on duty.

Even the state Supreme Court, while saying the law clearly does not give Madigan the authority to “contest every administrative decision made” by the Chicago police officer’s retirement board, seemed to sympathize.

“This opinion should not be read, in any way, as diminishing the seriousness of Burge’s actions,” the court said in concluding its opinion.

Madigan’s office suggested that state legislators should change the law so the attorney general has the authority to challenge a pension such as the one being paid Burge.

“The state should not be in a predicament where a felon whose crime was related to his job is receiving a pension,” it said in a statement. “It’s a complete injustice.”