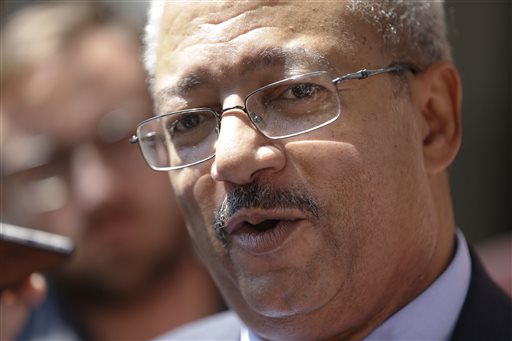 U.S. Rep. Chaka Fattah, D-Pa., arrives at the federal courthouse, Tuesday, Aug. 18, 2015, in Philadelphia. Fattah has been indicted on charges he misappropriated hundreds of thousands of dollars of federal, charitable and campaign funds. (AP Photo/Matt Rourke)

The Pennsylvania Democrat vowed to remain in office, run for a 12th term next year and remove “the cloud from my very good reputation.”

“I understand their desire to come after me … but to take innocent people, to take people in my family and to smear their good name — that says a lot about character, so I think that’s the most unfortunate part about this entire process,” Fattah said after a brief court appearance.

Fattah, 58, was released Monday on $100,000 personal recognizance bail and surrendered his personal passport. He remains free to travel throughout the U.S. and to take work trips overseas on a diplomatic passport.

“I plead innocent — not guilty,” Fattah said in court, jumping the gun before he was asked to plead to the racketeering conspiracy, bribery, mail fraud and other charges.

“I haven’t committed any crime,” he again volunteered, before U.S. Magistrate Timothy Rice instructed him to simply answer the question asked.

The indictment describes four schemes, two involving efforts to erase debts from Fattah’s failed 2007 bid for Philadelphia mayor. The U.S. Department of Justice alleged that Fattah used federal grants and donations to his educational foundations to pay back part of the seven-figure campaign loan.

Fattah sent a letter Monday asking the House judiciary and oversight committees to preserve all material related to the case and to review it for “unconstitutional or unlawful behavior.” He said that lawmakers have been targeted by “unconstitutional and illegal investigations” for decades.

Fattah has dismissed the yearslong investigation and said he’s “never been involved in wrongdoing, any unlawful activity (or) any misappropriation of federal funds.”

While keeping his congressional seat, he has stepped down from his leadership post as the top Democrat on the House Appropriations subcommittee that oversees spending for Commerce, Justice, Science and related agencies.

The investigation has already ensnared two former aides, who have pleaded guilty to charges linked to Fattah’s campaign debt, and his namesake son, who awaits trial on an overlapping case that includes charges he misspent $930,000 in federal education funding.

The son, Chaka Fattah Jr., also is under indictment in a separate but related case being handled by the same prosecutors. He has also vowed to clear his name and called his arrest politically motivated.