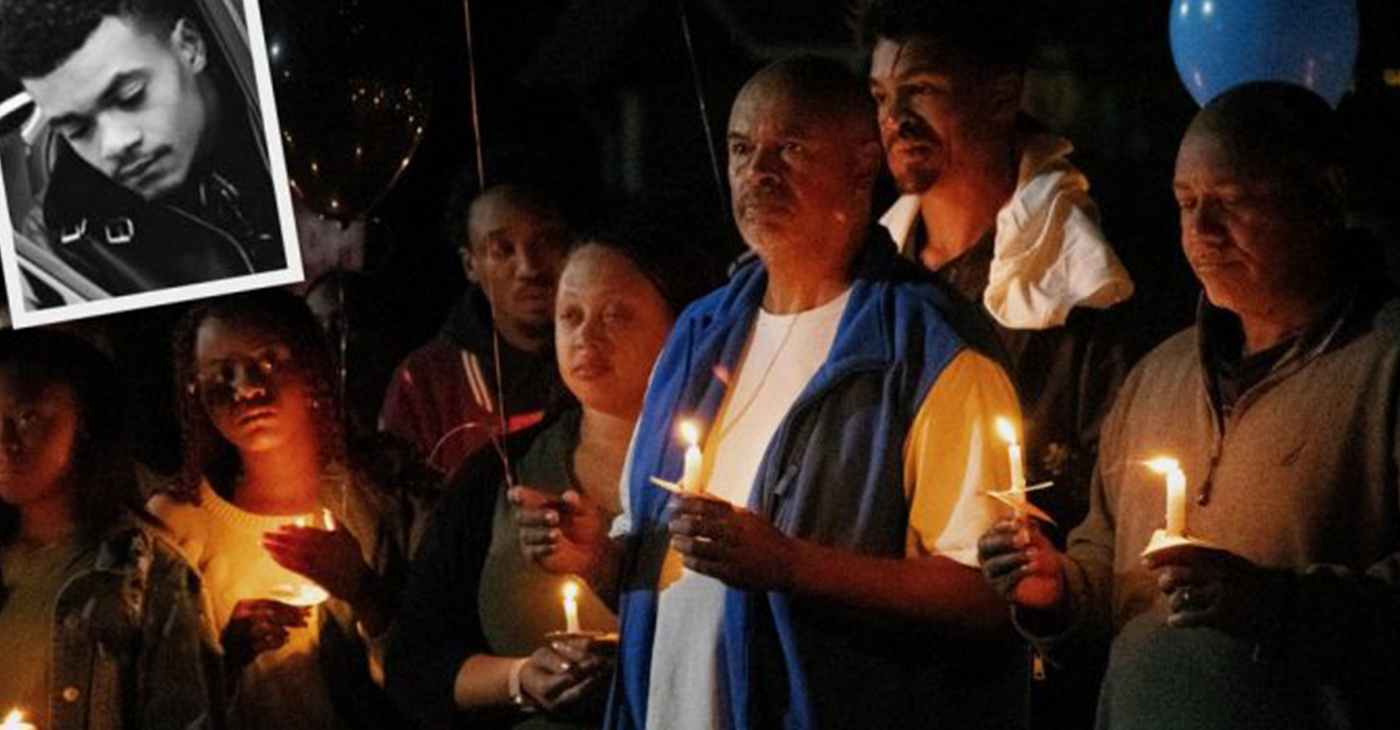 During a candlelight vigil on Oct. 6, Phillip Brooks Sr. is joined by son Phillip Brooks Jr. and daughter Markia Abdur Rahama as they remember their loved one, Bryant Brooks (inset photo), who was murdered in Oxon Hill on Sept. 30. (Photo by: Charles Nyonga)

Over 100 friends and family gathered for a candlelight vigil mourning the loss of Bryant Brooks, the 19-year-old man who was murdered Sept. 30 in Oxon Hill. Loved ones met at Fort Foote Recreation Center Sunday evening to deal with the emotions of his passing.

The outpouring of love and respect was displayed by everyone that convened at the soccer field on Fort Foote Road for a young man who was a big influence on the people around him. Laquita Brooks, Bryant’s mother, was so distraught, she couldn’t bring herself to attend.

From a young age, Bryant was an ambitious entrepreneur. Phillip Brooks, Bryant’s father, described how he would watch what he did and then repeat his actions. As he matured, Bryant’s passion for money led to borrowing his father’s shovel to clear driveways in the winter and the lawnmower to cut the grass during the summer to earn extra cash.

“He walked that lawnmower miles to cut grass. He wore the wheels off one lawnmower and the motor out of the other,” said Brooks.

Markia Abdur Rahma, Bryant’s older sister, remembers him as a fun-loving, talented young man with a fantastic future ahead of him.

“The last time I saw Bryant was June for my daughter’s graduation,” said Abdur Rahma. “We just talked and cracked jokes; it was a good vibe. He was very kind and genuine, and this was not deserved.”

Bryant was into fashion because of his older brothers Vandy and Phillip Brooks Jr. Vandy said that Bryant would take his old shoes and clean them up so he could have them once he grew into them. He would take worn shoes, clean them up, and try to resell them.

“I had him in New York,” said Phillip. “We had modeling agencies already looking at him, and this was some Nipsey Hussle stuff. People were hating on how good he was doing.”

Bryant had just returned from New York and was staying with his family and was planning to head back soon. His plan was to model for Vandy’s clothing line while working in New York.

Bryant was adored by everyone in his neighborhood, as well. He would stop by houses to check on his favorite people, such as Pat Johnson. She told stories of how Brooks would come to visit her regularly, especially on his birthday.

“I watched him from five-years-old until he was 12, from Fort Foote Elementary to Oxon Hill Middle,” said Johnson.

“He was cool…stayed out of the way,” said Josue Escobar who had known Brooks for nearly 12 years. “He was trying to be fly and get money, but certain people don’t like to see people get money.”

The men charged with the murder, Roger Beckwith Jr., 21, and Mark Lechoco, 15, were arrested and charged with the alleged killing of Brooks on Sept. 29. Beckwith, of Baltimore and Lechoco, of Fort Washington, will be tried as adults. The preliminary hearing will be held at the District Courthouse in Upper Marlboro on Oct. 18.