COMMENTARY: Should the Grizzlies trade Mike Conley and Marc Gasol to The Lakers?
Advertisement 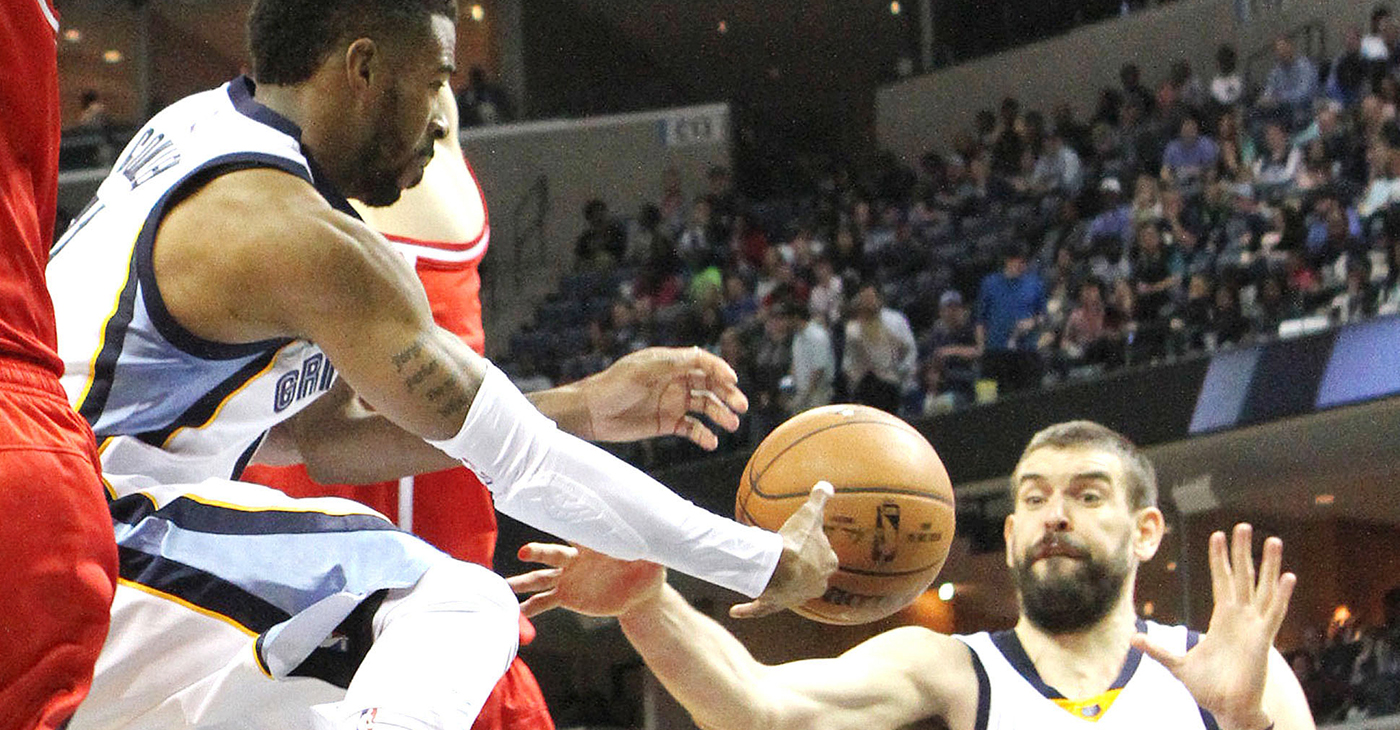 Apparently, what I once considered “unthinkable” now seems more like inevitable.
On Tuesday, ESPN’s Adrian Wojnarowski dropped yet another “Woj Bomb” on the Grizzlies – breaking the news that for the first time, the Grizzlies will listen to trade offers for franchise icons Mike Conley and Marc Gasol.

Later, it was reported in multiple media outlets that Grizzlies owner Robert Pera spoke with both players by phone to confirm that they may well be in their final days/weeks with the team. Conley spoke with media about the call during shootaround for Wednesday’s game against the Charlotte Hornets.

It was all business and all joy two summers ago, when Conley signed a then-NBA record $150 million contract with the team. Gasol had signed a similar deal the year earlier.

Even though it was clear the Core Four’s days were numbered, the Conley and Gasol signings signaled some continuity, some hope that a playoff spot was within reach with both players healthy.

That has not happened.

“A couple of years back, that’s the thought that goes through your head, like ‘Man, I could be playing in the same place 14 or 15 years.’ That’d be awesome. Hopefully, retire one day as a Grizzly,’” Conley said Wednesday. “But you also understand that in three or four years, a lot can happen, a lot can change.

“Memphis is all I know. It’s my home. I love everybody here, my teammates the organization. It’s new ground for me and we’ll see how things play out.”

Gasol also spoke to media after shootaround. If you’ve listened to Marc talk about his career, his approach to his job or how he feels about Memphis, none of his comments should surprise you.

“You still have to do your job,” Gasol said. “Things happen, and you can’t control the things happening around you. But you still gotta go out there and do your job. Whatever you need to do, go out there and play basketball. Help your teammates. Make each other better. That’s it. And compete. That’s what fans want to see, what they want to watch.”
If you want to say it right now, I’ll join you: Gosh, I’m going to miss these guys.

Listening to sports talk radio, some analysts are quick to remind us that neither of these men have been traded yet – and that a trade may not happen before the Feb. 7 NBA deadline. It may not happen until the offseason. It may not happen at all, if the Grizzlies don’t get offers they can live with. Thus, the thinking is to pump the brakes on saying farewell to these sports heroes.

Balderdash! Clearly, these people forget how NBA trades work. You’re literally with your current team at 1 p.m. on a game day. By 6 p.m., you’ve been pulled out of the locker room and a team official tells you you’re gone. Your teammates, coaches and others don’t get much time to say goodbye, and if you’re a fan, you won’t get any.

The truth is, any remaining game this season might be the last in a Grizzlies uniform for either or both of these players. So, if you get your hands on a ticket, savor it. Cheer and clap, because both of these class acts deserve it.

Which brings us to the attention-grabbing headline at the top of this story. Until there actually is a trade, there will be no shortage of fan speculation. Devoted fans, maybe even you, have been blowing up ESPN’s Trade Machine. Most of them probably won’t happen for one reason or another. But while it’s no fun to watch the Grizzlies get beaten by 20 at home on MLK Day, it’s at least fun to play with the possibilities.

And I’ve got a trade scenario you’re going to love and hate. In fact, you may even love to hate it, while simultaneously hating that you love it. First, let’s set the context:

In an ideal trade, Conley and Gasol get traded to playoff contenders, perhaps elevating into title contention. They deserve a chance to play for a ring. Even more ideal, if they get to continue to play together on a new team.

Meanwhile, the Grizzlies want to add young pieces around rookie phenom Jaren Jackson Jr. – the usual combination of draft picks, young talent, expiring contracts and financial flexibility. If all goes well, the team may stink for a couple of seasons before maturing into a playoff hopeful. It was painful, but that strategy paid off for the Philadelphia 76ers.

So, an ideal trade partner would have young assets and expiring contracts. But if you’re trading for Conley and/or Gasol (and those hefty contracts), you likely believe they can help you win now. Maybe you have a star player in his prime who could use high-level veterans to make a deep playoff run.

I think there’s just such a team. Unfortunately, they play in the Western Conference. And they happen to wear purple and gold.

Yes. I’m talking about the Los Angeles Lakers. Here’s my scenario, which, regardless of its success on the ESPN Trade Machine, will likely never happen:

Before diving into the pros and cons, let’s rewind about 11 years. Chris Wallace sent Pau Gasol to the Lakers in the deal that brought Marc to Memphis and eventually brought two more championship banners to Staples Center. Wallace stockpiled talent and picks, shuffling his pieces until he’d built a playoff contender. It was the rare deal that eventually proved to be a win for both franchises. Could it be again? Let’s dig in:

Why The Grizzlies do it: The chance to do right by Mike and Marc while simultaneously collecting a TON of young talent.

Though beloved in Memphis, Conley and Gasol have played in relative obscurity for a decade now. Playing alongside Lebron would certainly put a spotlight on their game while requiring neither one to be “The Alpha” on the team. If they can win rings while making history with The King . . . well, good for them. They’ve earned it.

Meanwhile, the Grizzlies would check off a ton of boxes for a rebuild. First of all, Rondo, McGee, Stephenson and Beasley would likely be bought out or waived; if not, their contracts expire this season anyway. Pope would become an unrestricted free agent, thus freeing up his $12 million.

That leaves Ball, Ingram and Hart to join Jaren Jackson. That certainly puts a jetpack on a rebuild. Plus, you get all the headlines that Lonzo’s dad Lavar would generate.

Why the Grizzlies don’t do it: Honestly? I can’t imagine the Grizzlies turning this deal down, unless the Lakers demand some outrageous draft picks or something.

So, for those of you counting at home, in my scenario, a whopping EIGHT players would arrive in Memphis, effectively gutting the Lakers roster. They would need to add three players just to get back to the league minimum. And I’ve heard there’s a certain friend of Lebron, who might soon be a free agent – Carmelo Anthony.

So, we could be talking about a Lakers starting five that includes Conley, James, Anthony and Gasol. And just like that, the Lakers are back in the headlines again, if not a threat to Houston and Golden State.

You’d have to imagine Lebron would be delighted to play with two hungry, team-first, playoff veterans. And like he does everywhere he goes, Lebron would likely draw the best out of Conley and Gasol – which even at their advanced ages, is a little scary.

Why the Lakers don’t do it: They want to keep their young talent, plus nobody likes older players with massive contracts.

But I don’t know if that’s a deterrent. The Lakers went through all this when Shaq was traded to Miami in 2006. Faced with the possibility of wasting the talents of Kobe Bryant, they pulled the trigger on the Grizzlies trade and went straight to the championship.

It’s hard to imagine the Lakers letting Lebron play on a string of non-championship contenders. Whether it’s this fantasy scenario or another one, the Lakers front office is going to swing for the fences, sooner than later.

Like I said, it’ll probably never happen. But admit it: Reading this was more fun than watching me squirm to make something interesting out of the 20-point MLK blowout game, right? But whether it happens in a day, a week or in June, soak up the time we have left with The Conductor and Big Spain.

It could be over before you know it.