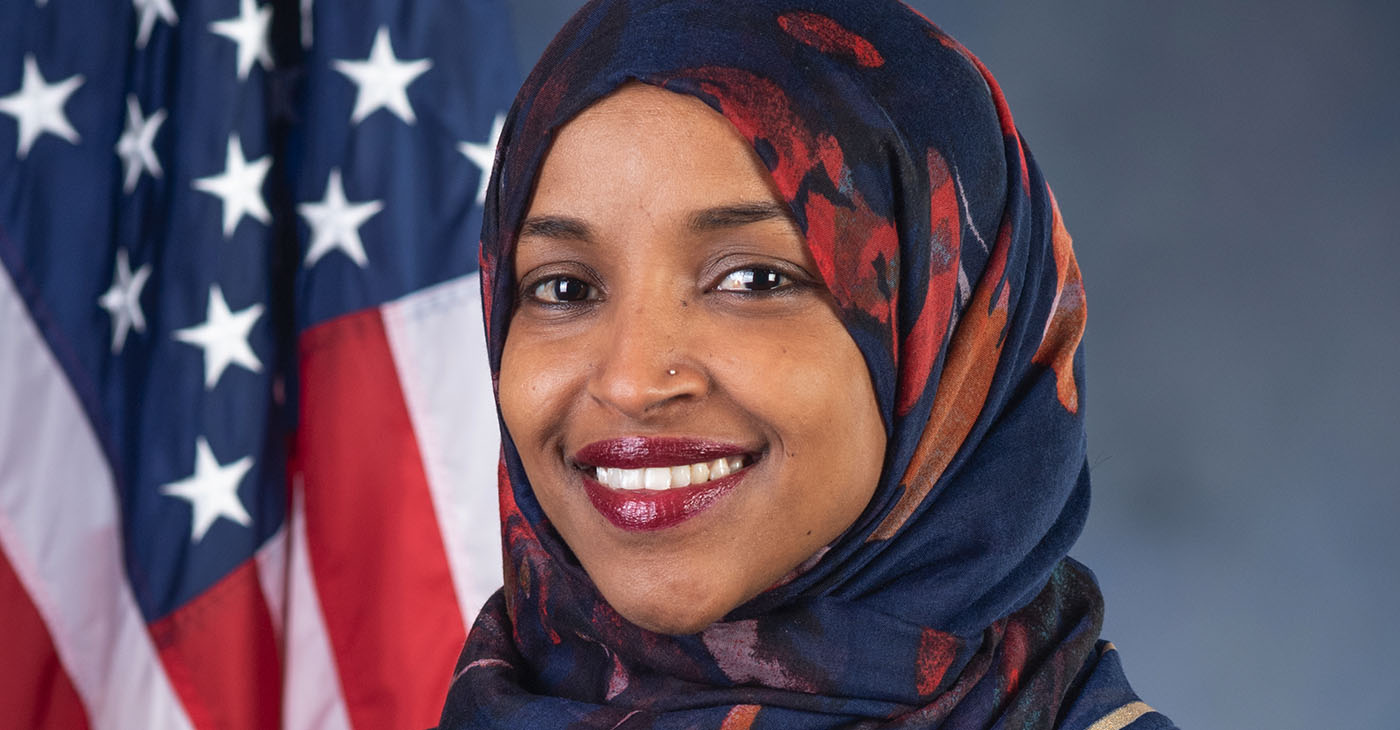 For the last several months, freshman Congresswoman IIhan Omar (D-MN) has weathered sustained attacks from Republicans, Fox News and other conservative elements because she has the temerity to question the intimate, decades-long relationship between the United States and Israel.

In addition to an avalanche of intense criticism, smears and lies from Republican and conservative critics, Omar has had to deal with death threats from people identified as being supporters of President Donald Trump and others opposed to the fact that a Muslim woman is in Congress.

The threats have gotten so intense, that House Speaker Nancy Pelosi ordered an increased security presence around the Minnesota representative, who to her credit, isn’t backing down from the campaign of hate launched by Trump, Congressional Republicans and rightwing media outlets.

“I did not run for Congress to be silent,” Omar said on Twitter following a tweet from Trump showing a video of Omar and images of the twin towers ablaze on 9/11 after an Al Qaeda attack in 2001. “No one person – no matter how corrupt, inept, or vicious – can threaten my unwavering love for America. I stand undeterred to continue fighting for equal opportunity in our pursuit of happiness for all Americans.”

Trump, the New York Post and Fox News, each owned by media magnate and Trump friend Rupert Murdoch, and the Republican National Committee’s Ronna Romney McDonald, have led the way in the criticism, smears and deceptive coverage and which has triggered pushback and calls to cease this dangerous behavior from Rep. Alexandria Ocasio Cortez, Sens. Bernie Sanders and Kamala Harris, Women’s March creators Linda Sarsour and Tamika Mallory and a range of other women and activists, including Rashad Robinson of Color of Change, journalist and activist Shaun King and others.

Tlaib, one of Omar’s staunchest defenders, called on Democrats last week to speak up in support of her colleague. And they have.

Enough is enough, she said.

“Taking it out of context, this is just a pure racist act by many of those — hateful acts by those — because she does speak the truth,” Tlaib told MSNBC’s Hallie Jackson. “I’m really outraged because as a person who has gotten direct death threats myself, I know that her life is put in more danger.”

“The fact that these people are irresponsibly taking those words out of context and endangering the life of Rep. Omar is immoral, it is wrong, and it needs to be called out by many my colleagues not just myself. They need to stop targeting her this way, it is absolutely putting her life in danger.”

“Members of Congress have a duty to respond to the President’s explicit attack today. @IihanMN’s life is in danger. For our colleagues to be silent is to be complicit in the outright, dangerous targeting of a member of Congress. We must speak out,” she said.

“It goes without saying that #IstandWithIIhanOmar. And anyone who doesn’t not stand with @IIhanOmar stands with Islamophobia, with racism, with politicians deploying lies to inflame religious and racial terror in the country. There is no middle ground in this struggle,” said Dr. Kendy, Director of AU’s Antiracist Research & Policy Center, a National Book Award winner and author of ‘Stamped From the Beginning: The Definitive History of Racist Ideas in America.”

Since she was sworn into Congress in January, the freshman legislator has spoken of, and tweeted about the crisis that has engulfed Israel and the Occupied Territories. Few in her position have been so openly critical about Israel’s decades-long clashes with Hamas, the deaths of primarily unarmed Palestinians at the hands of Israeli forces and a variety of actions that international organizations like the United Nations have deemed violations of international law and breaches of human rights conventions and laws.

At a town hall at Busboys and Poets in downtown DC almost two months ago, Rep. Omar, one of the two first Muslim women ever elected to Congress, spoke about AIPAC’s influence on Congress.

“…. For me, I want to talk about the political influence in this country that says it is ok for people to push for allegiance to a foreign country,” she told the audience. “And I want to ask, why is it ok for me to talk about the influence of the NRA, of fossil fuel industries, or Big Pharma, and not talk about a powerful lobby that is influencing policy?”

The backlash has been sustained and fierce.

Israeli- American activist and writer Miko Peled said Omar is being targeted specifically because she’s chosen to give voice to her deep misgivings about America’s unequivocal political and economic support of Israel despite the government’s 52-year occupation, the Israeli government’s illegal settlement activity, its appropriation of Palestinian land and of shooting unarmed civilians with live rounds.

Much of the anger, criticism and condemnation towards Omar stems from fear and race, said Peled, member of a revered Zionist family, whose grandfather was one of the original signers of the Declaration of Israel’s independence and son of general who fought in the 1948 and 1967 wars.

“American political institutions are made up of White men who are not used to Black women,” he said during a telephone call from Palestine. “It’s racism. In their mind, she’s supposed to be subservient but she’s calling them out and calling out AIPAC. She has courage and is eloquent and they don’t know what to do with her.”

What has been lost in the furor is the fact that Rep. Omar and her colleague Rep. Rashida Tlaib, who is Palestinian-American, are raising these questions because they want what they call an honest debate around these issues. That isn’t happening because at the moment, it is often drowned out by the furor of her critics, which is by design, Omar and other critics say.

“But it’s almost as if every single time we say something, regardless of what it is we say, that it’s supposed to be about foreign policy or engagement, that our advocacy about ending oppression, or the freeing of every human life and wanting dignity, we get to be labeled in something, and that’s the end of the discussion, because we end up defending that, and nobody gets to have the broader debate of, ‘What is happening with Palestine?’” Omar told the Busboys and Poets gathering.

But Pro-Palestinian activist Ariel Gold said Rep. Omar has opened the door to more public debate and shaken up the status quo in a way that likely cannot be reversed.

“I think this is a watershed moment. I saw it coming in an interesting way,” said Ms. Gold, national co-director of Code Pink, a women-led grassroots organization working to end U.S. wars and militarism and supporting peace and human rights initiatives. “We’ve seen a dramatic shift in Congress and American Jewish opinion, especially young Jews. They are more outspoken against the occupation and Reps. Tlaib and Omar are now in Congress.”

This changing sentiment has scared pro-Israel supporters, she said, hence their resentment of, and fury towards, Omar.

“Defenders of Israel and the status quo became more incensed,” said Gold, a Jewish-American, who in 2018 was denied entry into Israel to study because of her work in the US and Israel in support of the Palestinian cause. “These supporters were looking for the weakest link and saw a Black, Muslim woman. They thought this was shaky ground. They felt this was the time to go after her, not just Marco Rubio, Engel, Deutsch, but to ensure that Democrats would tow the party line. This shift is an aberration. You had a number of different pieces coming together. Let’s just say they got their asses handed to them.”

Peled and a number of political analysts and experts agree with Gold that Omar’s comments and her willingness to question the actions of the Jewish state as well as AIPAC’s enormous influence on members of Congress may change the way people deal with Israel.

“She has set the bar so high and opens the door to a whole new level in the next two years, if we stand with them and not allow them to be pushed back,” said Peled, a fierce and vocal critic of Zionists, the Netanyahu government and those who support the oppressive state. “There are a whole lot of them (congress people) who’ll move if they’ve not the first one. Historically, we’re standing at a really important intersection. We might be at that tipping point.”

After Historic and Emotional Win, Tiger Woods to be Awarded Medal of Freedom

Liberation Journalist Barrington Salmon lived and wrote in Florida (Miami and Tallahassee) for almost 20 years. He is a 2017 Annenberg National Fellow (University of Southern California) who currently freelances for several publications, including The Final Call, Atlanta Black Star, the National Newspaper Publishers Association and The Washington Informer. Salmon writes on a variety of topics in the nation’s capital and can often be heard on WPFW, DC’s Pacifica public radio station. The Washington metro area has been Barrington’s home for 20 of the past 22 years, broken up by a two-year stint in Addis Ababa, Ethiopia. A London-born Jamaican, Barrington has traveled widely to locales including Ghana, Israel, Italy, Greece, El Salvador, Amsterdam, China, Nepal and Zanzibar. Connect with Barrington on his video blog, Speak Freely with Barrington Salmon + follow him on Twitter @bsalmondc and on his Facebook page, BarringtonSalmonWrites.