Chinese Journalists are Beginning to Fight their Government's Censorship
Advertisement 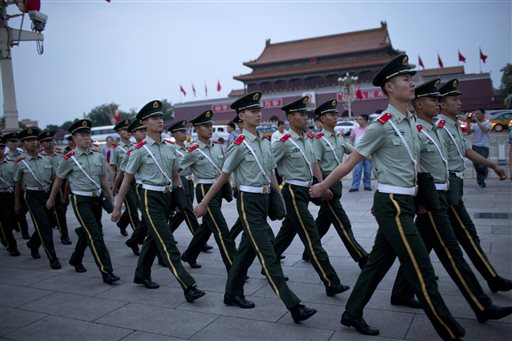 Paramilitary policemen march on Tiananmen Square after a flag-lowering ceremony on Tiananmen Square in Beijing, China, Wednesday, June 4, 2014. Heavy security blanketed central Beijing on the 25th anniversary of the bloody suppression of the Tiananmen Square pro-democracy protests on Wednesday, pre-empting any attempts to publicly commemorate one of the darkest chapters in recent Chinese history. (AP Photo/Alexander F. Yuan)

(The Washington Post)—China’s effort to choke dissent didn’t begin 25 years ago Wednesday with the Tiananmen Square massacre. But that’s when the modern-day paranoia began to set in, and it’s easy to trace a straight line from that day to the elaborate regime of digital censorship that exists today. (Mentions of the massacre or the protests beforehand are forbidden on China’s TV, newspapers, and internet.)

But if President Xi Jinping and his colleagues want to keep a lid on that bottle, they may face resistance from a surprising source: the nation’s budding journalists. By substantial numbers, students in some of China’s leading journalism schools oppose censorship, doubt the credibility of their domestic media, and don’t believe journalists should be members of the Communist Party.

These are among the results of a survey a colleague, Linjun Fan of Shantou University, and I conducted with the help of journalism teachers at several universities in China. Over 120 students from eight schools responded anonymously to the online survey. We polled students last fall, at a time when Chinese leaders were reasserting the primacy of Marxist education for working journalists — and were battling Bloomberg News and the New York Times over unflattering coverage. The survey came nearly a year after journalists at China’s Southern Weekly struck for three days to protest censorship.