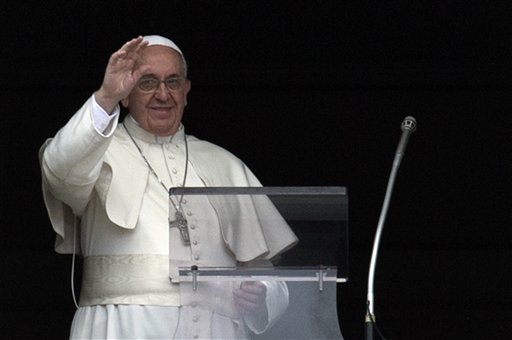 Pope Francis delivers his blessing during the Angelus noon prayer he celebrated from the window of his studio overlooking St. Peter’s Square, at the Vatican, Sunday, March 23, 2014. (AP Photo/Andrew Medichini)

VATICAN CITY (USA Today) – China has reacted cautiously to a bid by Pope Francis to open new dialogue with Beijing, with some officials quick to warn the Vatican not to “interfere” with the country’s religion.

On his return flight from a five-day tour of South Korea, Francis said he was ready to go to China — “For sure! Tomorrow!” — after receiving a positive response to two goodwill telegrams he sent to President Xi Jinping as the pope flew over Chinese airspace.

“We respect the Chinese people,” Francis told journalists on the return flight Monday (Aug. 18). “The church only asks for liberty for its task, for its work.”

That is still a huge challenge, as the Vatican has not had diplomatic relations with China since 1951. The Catholic Church in China is divided between an “official” church known as the Catholic Patriotic Association, answerable to the Communist Party, and an underground church that swears allegiance to Rome.